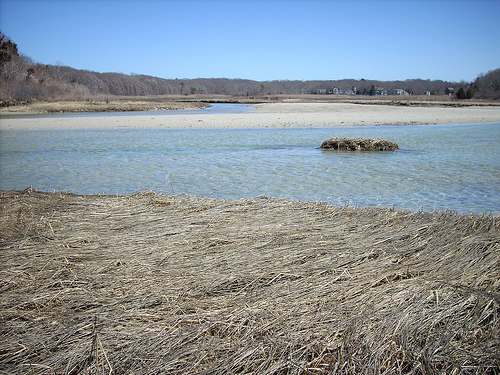 Walking will solve it.

Spring and fall, winter and summer for more than half my life, I have gone out walking almost daily on a road that edges a vast Cape Cod salt marsh.  This loosens things up before I sit down with my notebook. A stream meanders through the marsh, and where it parallels the road I walk beside it, out to a bay beach parking lot, then down the strand a half mile or so to a stone jetty, one of two that keeps the tide- and wind-mauled sands from closing the entrance to the harbor. At the jetty I am midway between two high dunes, each about a half-mile away. One is Corn Hill, and marks the northern extent of the Pamet River’s fluctuations over time, while the other dune, beyond Fishers Beach, is the southern extremity. Over generations, the river has moved back and forth on the land between these two hills like a whip cracked in very slow motion.

At the jetty I turn back to the parking lot, but by an inside route that takes me between a dune we call Egg Island and a vast tract of eelgrass on the north side of the harbor. These days, before I leave the beach for the parking lot, I check to see if anything of a gray streak of ashes with brighter  particles embedded in it is left on the sand. The particles were small bone chips, and the remains those of my fourteen-year-old border collie, Finn, who all his life loved to run this beach with a ball in his mouth. The ashes hung on for several weeks after I spread them, as though they were reluctant to part with this place. Finally the extreme high tides of the winter solstice gathered them in.

A few days after I left his ashes, one of those events occurred that only the natural world can stage. Walking these sands, I heard a rush above my head that made me think the air was being ripped open. In the distance, after it passed, I realized it was a flock of birds, probably of least sandpipers, though they were too fast for me to be sure. But they were white on their sharp turns, hundreds of them, and flattened over the river before coming together again, this time in a ball, and heading back out towards the bay. It was late in the year for a migration, especially of such small birds, and I wondered if they were a sign it was going to be an exceptionally mild winter, or if they had left the north quite late and were building their strength and resolve here before moving out across their next broad southward Atlantic reach. Maybe they were a sign to a man grieving his dog, too.  I stood there watching them fly down the beach, lost in the midst of my total ignorance about matter and its changes, shifts of being, the journeys of the soul. I remembered an Irish saying that for me has a double edge: When death comes it does not go away empty.

Brendan Galvin is the author of sixteen collections of poems. Habitat: New and Selected Poems 1965-2005 was a finalist for the National Book Award. The Air’s Accomplices, a collection of new poems, is forthcoming from LSU Press.