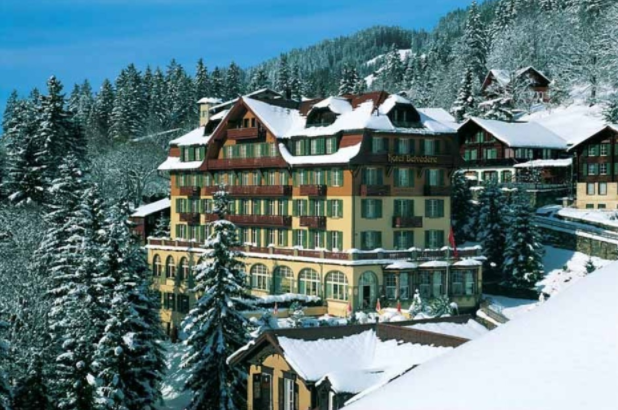 A June day under the Jungfrau.

Near the railway that brought her here,

an old woman sits on a bench.

She isn’t facing the Jungfrau

but the Hotel Belvedere

which has, as its name implies,

a beautiful view of the Jungfrau,

a name for what she had been

when she last saw it, maybe,

She regards the hotel intently,

studies what I assume

were the windows of their room.

Was it hard to come back alone,

hobbling on that cane?

No, not alone: her husband

and daughter (or granddaughter—

have arrived with ice cream cones,

is piled on the widest end.

They make the most of that pleasure

a tripod’s pulled from a backpack.

Steady as you go

is what the granddaughter says

as she pulls the old woman up

lean to make one shape

But the hotel’s the backdrop.

The camera’s timed to snap

at a smile, and another smile;

new pose, and it snaps again.

Even the staring stranger

who has no need to invent

their story is distracted

from the majesty of the Jungfrau,

to yield up little grandeur:

the acts of a granddaughter

who, when she’s old, will tell

of the long journey they took

back to the hotel,

the origin of what mattered

to a few vanished people.

There was ice cream; and a view

of the snowcapped Jungfrau,

which is nowhere pictured.

Mary Jo Salter‘s eighth book of poems, The Surveyors, will be published by Knopf in 2017. She is Krieger-Eisenhower Professor in The Writing Seminars at Johns Hopkins University, and lives in Baltimore.