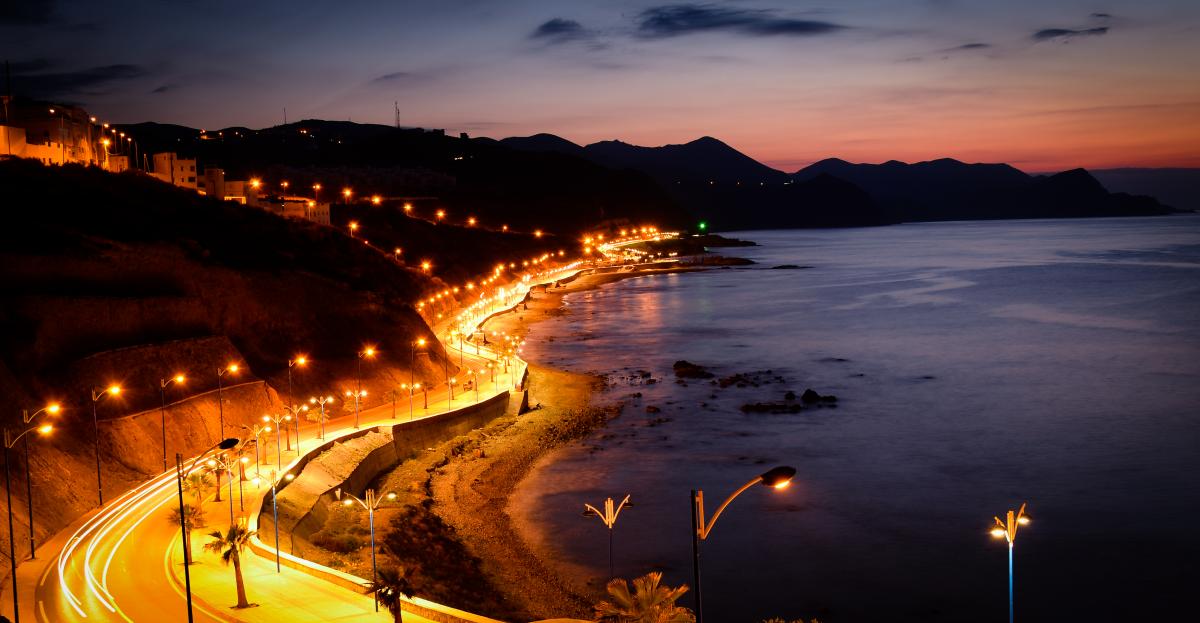 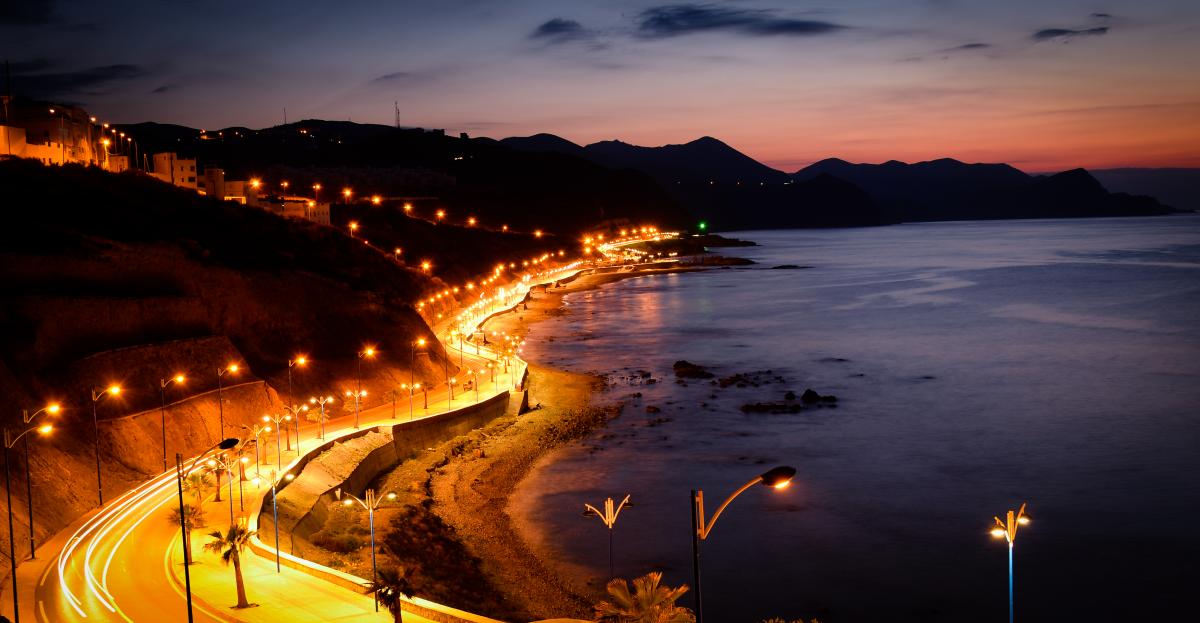 I’ve come to a club called the Rose Bar with friends.

My friends and I work as Fulbright scholars and foreign service officers – a group of young ex-pats who wouldn’t belong in a place like this in the United States. The Rose Bar has white leather furniture, security guards with earpieces and suits, Jags and Beemers in the parking lot, and outrageously priced drinks with flagrant, edible garnish. The club has an address on the Corniche, the French-erected walkway along the ocean where the city’s once glitzy hotels and clubs make their homes. The places passed their prime long ago and remind me of boozy movie stars who haven’t aged gracefully – shabby, but resembling beauty. Unlike the other places, the Rose Bar clings fiercely to the idea that she is not a seedy nightclub.

Daniel, a budding environmental historian, and I get lost inside the club in a smothering crowd of nice suits, designer tube dresses, and fur coats. We make our way to the bar, accidentally separating ourselves from the rest of our underdressed friends. Over the heavy techno beat, Daniel yells into my ear, “I’ve only hung out in places like this when I’ve worked in them.”

At the bar, Daniel and I order the club’s signature drink, a rose cocktail. It’s a syrupy concoction with muddled rose petals that comes in a highball glass. When the bartender sets the drinks before us, we begin to cackle. We’ve spent the last of our Fulbright stipends this month on pink drinks with rose petals.

A man in a tan linen suit who says he’s from Libya touches my back, offering to buy me a drink and probably much more. Uncomfortable, Daniel and I leave the bar and wander the blue-lit tentacles of the club. We come to a room near the DJ, still blasting techno, where we spot one empty, low table surrounded by white leather couches. Although we know the rules of clubs in this city – we know, for example, that the rest of the crowd inside isn’t sitting at this table because it’s reserved for someone more important than us – we hardly discuss our decision. Each of us nods at the other. We take our rose drinks to the couches and sit.

I sit at the table because I feel entitled. I dated a French-speaking Moroccan advertising photographer for several months, until I discovered he only dated white women. My French is not good, yet everywhere I go in the city people speak French to me until I insist they speak Arabic. In Casablanca people assume that if you belong to the elite you speak French. If you look European or American you belong to this class by default even if you don’t have the right clothes.

Daniel speaks perfect French, but refuses to now in public. When taxi drivers speak French to him, he speaks back in Arabic, gesticulating wildly. We both teach at public universities. During the eight months we’ve spent in Morocco, we’ve come to understand that our students have little chance of penetrating the class defenses of places like the Rose Bar.

In the club, it takes only a few minutes for waiters in bow ties to arrive and announce we must move from the white leather couches. They attempt this eviction in French, to which neither of us responds. I recline on the couch and suck on the straw in my rose petal drink. They try again in French, addressing Daniel. He looks over at me. I shrug my shoulders.

Then they try English, but Daniel plays dumb American.

“Why shouldn’t we be able to sit here?” he says. “We don’t understand.”

Then a man emerges from the shadows to claim his table, followed by an entourage. He’s very thin with long, gelled hair and wears a metallic suit. He seems to be some sort of Casa gangster. The woman next to him has on a white fur coat, and at the end of her long, bare legs she wears a pair of very tall red heels. She has her hands on her hips, revealing the tiny tight black dress she’s wearing, and a sneer across her garish red lips.

When the man starts talking, it’s in French, in a soft, high-pitched voice. I don’t know what he says because I can’t listen. I start laughing at him and soon Daniel is laughing too, a reckless laughter. But we give up the couches. Both of us rise without responding, clutching our rose drinks.

Once we stand up and back away from the table, we find ourselves crammed onto a small dance floor. We see our friends huddled near the outside patio, and we make our way to them. There’s no door to the outside, just a place where there is a ceiling and then none, only the dark sky. Hips and butts keep knocking into me. Outside, it has begun to rain harder. The drone of the droplets on the glass ceiling drowns out the sound of the waves, muffles the music.

The DJ plays Whitney Houston, and I decide to dance. There’s no place to dance in the mob and so I break free, out to the empty wet bar on the deck. In the glare of the pink and blue lights, the raindrops look like hundreds of comets falling from the sky. The tables and chairs outside are all drenched. I put my hands and face against the glass retaining wall. The ocean appears black, waves of ink spilling over jagged rocks. Some of the spray catches the light and shimmers as it flies toward me. I am humid, alive and thrumming.

I back away from the glass and dance. I do the dance I do in my apartment when I’m alone. I dance with my feet, arms, and hips. Bourgeoisie Moroccan women don’t dance like this in clubs in Casablanca, at least not the women I’ve ever seen. They do a controlled hip shimmy, belly dancing moves they’ve adapted to house music. They always seem conscious of observers, even when they dance on tables, which is a common occurrence.  The rain saturates my hair and dress, but I turn my face up into it.

Rebecca, a foreign service officer who speaks Russian, Thai, and French, and whose sister is a stripper back in Michigan, joins me. She does her own strange, ecstatic jig. Daniel joins us. His dance is similarly uninhibited, with some fist pumping. He’s still holding his rose drink.

Near the edge of our dance party, the rest of the ex-pats linger: a girl from Harvard who teaches at the American school, isn’t dancing, and I’m pretty sure is embarrassed to have come with us; Claire, a lithe blonde Fulbrighter, stands nearby with the Moroccan man who has been trying to sleep with her for months; they also don’t dance.

When I am soaked and tired, Claire and her date offer to drive Daniel and me home. Before we leave the bar, we dig the rose petals out from the bottom of our glasses with our fingers and shove them into our mouths. The petals taste bitter. I spit mine back out on the cedar floor of the patio.

Claire’s date is called Omar, the name of one of the first caliphs of Islam, an unpretentious man who, even after he became a ruler, slept under a tree in his fields and used his sandals as a pillow. But this Omar is different. He wears a perfectly tailored black suit and shiny black shoes. It’s rumored that his father, the former mayor of Casablanca, embezzled money from the city, a lot of money, which helped to pay for Omar’s education in the United States at Claire’s small liberal arts college. Omar says he works in “venture capital investment.”

Omar and Claire lead us to a forest green Jaguar parked in front of the Rose Bar. I stop by the car and say, “This is your car?”

“Yes,” Omar says. He unlocks the doors with his clicker.

I get in the back with Daniel. Claire rides in the front seat. We start to drive. It feels as though I’m swimming in the leather seats. I’m grateful for the ride because Daniel and I have eaten the rose petals from our drinks, and I know we are in no shape to negotiate with Casa’s cab drivers. But still, I feel guilty about hanging out at places like the Rose Bar and riding in cars like Omar’s. I wonder how this car would look driving down the road in front of the university where I teach in Casablanca’s oldest slum. Some people there still get around by horse-drawn carriages, which cost less than the various taxis.

Omar is not watching Daniel and me in the rearview mirror. I hold up the drink I still miraculously have in my hand. I look at Daniel. He nods.

Then I dump the drink in the backseat of the Jag, all over the floor and the leather seats. I cover my mouth to stifle the laughter.

Natalie Storey’s work has appeared in Guernica Daily, The Los Angeles Review of Books, The Rumpus, Coldfront and other publications.