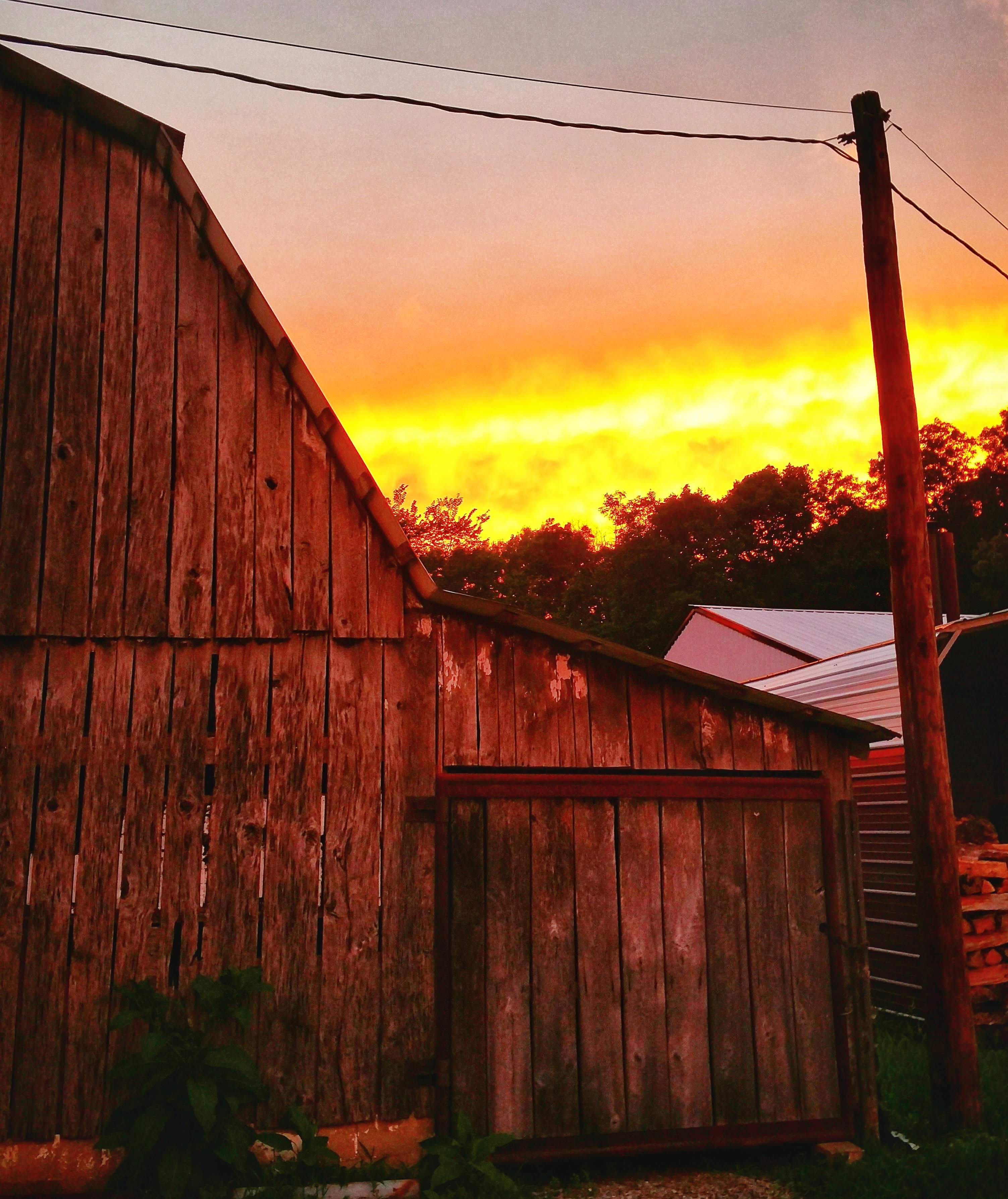 My father, Alan, was still drawing unemployment but had grown tired of sitting alone with no purpose, so he called Tom Wilson, an old high school buddy who farmed as well as bred and trained Appaloosa horses in the country west of town. Tom tried to politely beg off, saying he didn’t have anything that amounted to much and couldn’t pay the kind of wage he thought his friend deserved, but he caved when my dad simply said, “Tom, I need to work.”

So each morning through that spring and summer, my dad arrived at first light and entered the metal personnel door next to the large sliding doors that took up most of the barn’s front, and on many of those days, I got to tag along with him. Inside, the stables smelled of haydust and dirt and animals. The light switch by the door lit a row of bulbs above the runway, while the faint sun shone through green fiberglass skylights onto the dirt of the arena. My dad would go into the storage room and bring out a muckrake and shovel, put them in a wheelbarrow, and push it to the first stall.

After cleaning the stall of waste, he would go to the loft to pull down a bale of hay. The next step was one I could help with, pressing three flakes of hay between my hands and placing them in the horse’s manger.  While I did that, my dad brought a scoop of feed — sweet smelling oats and grain and sorghum, looking more like breakfast cereal than horsefeed — and put it in a small trough alongside the manger. The final task was to fill one of the plastic five-gallon buckets by the water spigot and carry it back the length of the runway. Sometimes, I would fill the bucket for my dad and try to carry it, but would often have to stop and set it down for a moment before picking it up again and trudging a few steps closer.

There were 15 stalls.  My dad cleaned each one, every day.

One day when I was there, and my dad was about halfway through his work, Tom Wilson came in.  I remember Tom as being shorter than my dad, stout and clean shaven, wearing a stiff green seed cap high on his head, the bill straight as the day it was made. “How you doing this morning, Alan? I see you’ve got your partner with you today.”

My dad leaned heavy on the rake handle for a moment.  “Yeah, he’s a pretty good helper.”

“Well, if he wants later, there’s a few fishing poles in the store room there, he can dig up some worms and walk down to the pond.”

I remember smiling at that, and my dad roughing my hair, which I took as a signal that I could if I wanted and to say thank you.

Tom smiled and nodded, then said, “Think I’m gonna work that thoroughbred down there on the end today.”

In the last stall the two-year-old stood glaring at us, as if it knew we were talking about it. The first day my dad had worked, he tried to clean around the black horse, but it bit at him and snorted and kicked the stall sides until he left.

Tom Wilson walked to the horse’s stall, and my dad went back to his work. Tom put a lead rope on the horse and stood in the center of the arena, and the horse trotted around him, bucking and shaking its head. They turned faster, and with each turn, the horse became more agitated. I stood with my feet on the bottom rung of the plank fence so I could see over. In one final burst, the horse jumped and lost its footing, coming down on its side and pulling Tom Wilson down with it, man and beast raising the dust in a fury.

The horse scrambled to stand, then came to a stop, ribcage heaving.  Foam lathered its blue-black shanks. Tom pulled a large aluminum scoop shovel through the fence, then walked calmly past the horse’s head, easing along its side. When he was behind it, he swung hard with one hand, the flat of the shovel going against the horse’s rump like a great teacher’s paddle. The horse didn’t flinch and stood calm. Tom returned the shovel, picked up the rope, and began to work again.  By the time my dad had finished cleaning two more stalls, Tom had the horse trotting smoothly around him like a one horse merry-go-round, the man in the center smiling, feeling the power surge down the rope into his hands.

I went to ask my dad if he needed any more help, but I’m sure he knew what I was really asking. “Why don’t you go grab a pole. There’s a little hand spade in there, go out by the manure pile and dig some worms. There should be plenty out there.”

I did as he said, then walked across the pasture beside the barn until I came to the pond. It had been well stocked and little used. The wind blew from the south, and the surface of the water moved in dark scales against the far bank. I opened the old coffee can Tom kept next to the fishing poles, picked out a fat writhing red worm, and baited the hook tied beneath a bobber and some small steel-shot sinkers.

For what seemed like a while, I watched the bobber dance as the hungry bluegill and sunfish continually stole my bait, and I would pull the line in and put another worm on, only to have the same thing happen again. I’d try different strategies when baiting the rig, and finally caught a few small fish with brightly colored scales. I had always loved fishing as a kid, but it was during this age that I started doing it alone and was reminded that up until then, other people had dealt with the fish after I’d caught them. I’m sure it was comical to watch me trying to grab hold of the fish as it spun and flopped on the end of the hook, trying to smooth back the sharp points of its dorsal fin as I’d been taught, and yanking my hand back if the fish jerked, afraid of the small sting. Eventually, I’d realize there was no one but me to make sure the fish made it back to where it belonged, and I’d gather my determination, unhook the mouth, and set it carefully into the water, where the fish would dart away into the depths with a splash.

After doing this a few times, I felt satisfied, and sat down at the pond’s edge. The earth there was still cool, and I looked out across the pasture to the three-strand barbwire fence running along the blacktop, the sun warm on my back, glad to be outside, glad to be spared from the work of men for a little while longer.

James Alan Gill’s writing has appeared in Colorado Review, Crab Orchard Review, Midwestern Gothic, The Common, and Prime Number Review, among others. He holds an MFA in Fiction from Southern Illinois University, and currently lives with his wife, Brittany, in Arizona.