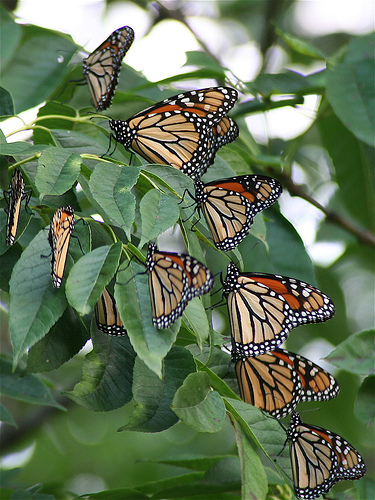 It’s late afternoon on the beach in North Florida. It’s October, the end of a season, and the world is in motion. Monarchs cloud through the sunlight in orange swarms; blooms of jellyfish float along the shoreline; and schools of grouper leap in flustered succession, tails suspended above the ocean, bodies flapping. The air is just cold enough to make us duck our shoulders under water and lift our faces toward the sun, not shivering but not warm.

M. is here from Chicago for a long weekend—the first of three days together before we go back to long distance and phone calls. We have driven to St. George, a small barrier island along the Gulf of Mexico, with the intention of forming a memory of ourselves together: a specific day in a specific place, a moment for us to return to later when we are apart.

The beach is a mix of sweatshirts and swimsuits, kites and fishing lines arching through the distilled light of early fall. There is a slowness to the women resting on beach chairs, skin covered with blankets, the children poking through red-brown sea grass for shells, a burrowing-feeling, a settling-in—residential routine replacing a summer of vacationers.

A heavyset white man with the brown-red skin of a summer in the sun passes with his two young daughters and shouts to us about jellyfish season, how we should be careful: both of his girls already having been stung. The younger of the two girls is carrying a dead jellyfish by the tail, fat and gray-blue, as long as her torso. We thank him and soon we are out of the water into the cool air, huddling into our towels.

We walk along the far edge of the tide, where the wet sand is scattered with shells and pebbles, seaweed, and drowned butterflies—their detached wings bright and floating. Beached moon jellyfish sit in slippery orbs, perfectly round and glistening, their sex organs symmetrical pink and white crescents buried in translucence. Barefooted, I dodge the jellyfish, my fear of pain overriding the urge to slide my toes against their skin—to check for myself if they feel the way they look.

When the sun begins to set, we change into dry clothes and cross a long two-lane bridge to Appalachicola, a small seaside town famous for oysters, its history as a busy trading port, and the 2012 Sports Illustrated Swimsuit issue, which was apparently shot on their beaches. Except for the gas station and the cars, the town is movie-set-cuteness: a firehouse and a historic post-office; tree-lined streets with big-windowed storefronts selling homemade fudge and ice-cream; a bride and bridesmaids taking pictures on a quiet street, the sunlight dancing against their dresses; fishing boats bobbing in a clear-blue bay; and a fundraiser for the volunteer fire department in the middle of town with live music and barbecue, couples dancing with linked arms, children chasing each other,  and the smell of air of pork roasting.

We see we can walk the whole town in minutes, and so we go slowly past the gray-blonde women in golf carts careening around saw palmettos on their way to a liquor store, past the museum with maps outside to guide us through a walking tour, and we stop at a small cedar lined with roosting monarchs—hundreds of them, perched closed-winged in pointed ovals like budding leaves. Delicate, almost weightless, in the wind they look as if they are pulsating against the tree’s nectar in fervent, gripping hunger. They are the emblems of adaptation and survival—wings unfurling from chrysalis into flight, buoyant color after a tightly wound darkness and then the pilgrimage of thousands of miles from north to south. The whole flock moves together, guided by the polarized light of autumn.

Here, though, in the Florida panhandle, on the eastern wing of the monarch’s flight path, the journey to Mexico is a water route, and their chance of survival is much smaller than the odds facing the butterflies that fly through the center of the country from Minnesota to Texas over land. This information, found later at home, reading, should not affect me any more than the fact of drowned fish or the related migration story a scientist posits about the monarchs’ paths being passed from one generation to another by the smell of their dead, the scent of decay tracking a trail through shrubs and branches. By a certain scale, the monarch’s cross-continental trek isn’t so different from the slow flotation of the jellyfish, its movements guided largely by current, an animal who procreates even by chance—egg floating through the water to sperm: a whole life conceived and carried by drift.  ‬