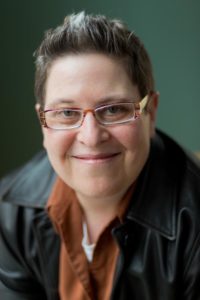 Judith Frank is the author of the novel, Crybaby Butch, and a professor of English at Amherst College. She received a B.A. from Hebrew University in Jerusalem and a Ph.D. in English literature and an M.F.A. in creative writing from Cornell. She has been the recipient of a grant from the National Endowment of the Arts, and support from both Yaddo and MacDowell. Marni and Judith spoke online about Judy’s new novel, All I Love and Know, and what it means to write about violence in the context of the Israeli-Palestinian conflict.

Marni Berger (MB): Your new novel All I Love and Know begins with a cafe bombing in Jerusalem and navigates the aftermath for both individuals and society. The overlap of personal and political is one of my favorite aspects of this book. In “real life,” do the politics of the Israeli-Palestinian conflict affect you in a personal way? If so, how?

Judith Frank (JF): The politics of the Middle East do touch my life – although I’m lucky that they do so gently. My sister and her family live in Israel – my nieces were both in the Israeli Defense Forces – so we worry about their safety.

But my love for them and my appalledness at Israel and its policies make a very uncomfortable mix. The relationship in the novel between [the characters] Daniel and his brother Joel expresses this discomfort. My sister and I practice gentleness and kindness, more or less, in our conversations with each other, but I wanted to imagine what it would be like if those conflicts were harsher.

MB: Aside from your personal connection to Israel, what made you decide to set a large portion of the novel in Jerusalem rather than in Palestine? Did you have any concerns about possibly setting a novel in Palestine?

There’s a book by an Israeli writer named Eyal Weizman called Hollow Land: Israel’s Architecture of Occupation. Its basic insight is there in the title: there is an architecture of occupation that affects what you can see, how you can be in space. 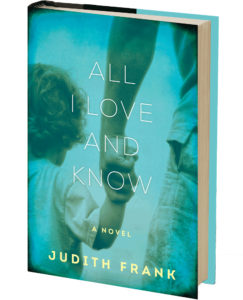 MB: All I Love and Know allows readers to empathize with political viewpoints we may not otherwise understand or want to understand by taking us inside the minds of characters with opposing beliefs. Was encouraging empathy in readers one of your goals for this book?

JF: Yes. When the attack on Gaza occurred, just as the novel was coming out, it became clear that this topic is increasingly hard to talk about civilly, and that Facebook debates aren’t taking us anywhere. I hoped that fiction would have a part to play here.

I have an Israeli/American friend who is extremely right wing, and with whom it’s very hard for me to converse these days. But she loved the novel, and said she didn’t mind the critique of Israel because that’s what those characters would feel. I was very happy to hear that – and then I wondered whether I’d made the critique strong enough. I wrote back to her, What did I do wrong?!

MB: Has the recent conflict in Gaza affected your process of writing and publishing the novel? In other words: Do you think readers will be more or less receptive given the timeliness?

JF: Readers are extremely aware of the coincidence of the timing of this book; at every reading someone asks me what I think about that coincidence or the conflict. I hope that it will make readers more receptive. This has been a horrible [conflict], with worldwide support for Israel diminishing, with these outbreaks of anti-Semitism, with congregations divided on the topic. It has shown how untenable it is for Israel to continue with business as usual.

I think that readers turn to fiction with a sense of relief.

MB: Two of the main characters in this novel are small children. Readers see two parts of the world – Israel and New England – through their eyes. How do you think children perceive place in comparison to adults?

JF: My own kids, who are six now, have totally forgotten our old house, which we moved out of just a year ago. That surprises me; I thought those memories would be more in their bones. [The character] Gal, who is six and seven in the novel, doesn’t notice her world so much in visual detail as in the feel of the air. Grief is a palpable sensory experience for her, for example. She very attuned to people and how they bend down to address her – more so than to place, I think.

MB: In addition to the Israeli-Palestinian conflict, the book addresses gay rights in the U.S. and in Israel. What made you decide to overlap these two issues?

JF: I had a hunch they’d have something to say to one another. I knew from very early on that the novel was going to begin during the second Palestinian uprising, and that it was going to end on the day gay marriage became legal in MA. I didn’t know much about the novel’s plot, but I did have that instinct. 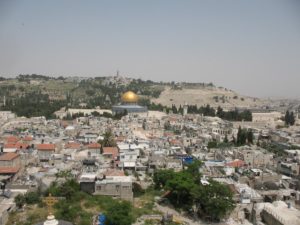 MB: Every character in the book seems to be pursuing personal peace in his or her own way, set against a backdrop of a much larger political issue in the Middle East. Do you see a hierarchy in the pursuit of peace? As in, which is more important – local or global?

JF: I don’t see a hierarchy. All I know is that finding personal peace in a profoundly violent world is a lifelong project for me and many others.

MB: Characters move from Jerusalem to Northampton, MA – and both places are written vividly enough to be characters themselves. Can place function as a character in novels too? How so?

JF: One of my friends said that this book is a love story to New England, as well as between the characters, so yes. It was pleasurable to write Northampton. Jerusalem is such an iconic city, and it’s easy for writers to fall into exoticism or heavy-handed symbolism when writing about it. Every time I used to ask for a bus ticket to Jerusalem, and say to the teller, “Yerushalayim,” I felt as though I was saying something profound.

MB: Will you keep writing about that pursuit of peace (on a micro or macro level)?

JF: Let’s say that I’ll probably keep writing about violence. I experienced [All I Love and Know] as being about violence more than about the pursuit of peace, although of course it’s both – how people make meaning and human connection in violent contexts.

Judith Frank‘s new novel, All I Love and Know, was released by HarperCollins this summer.