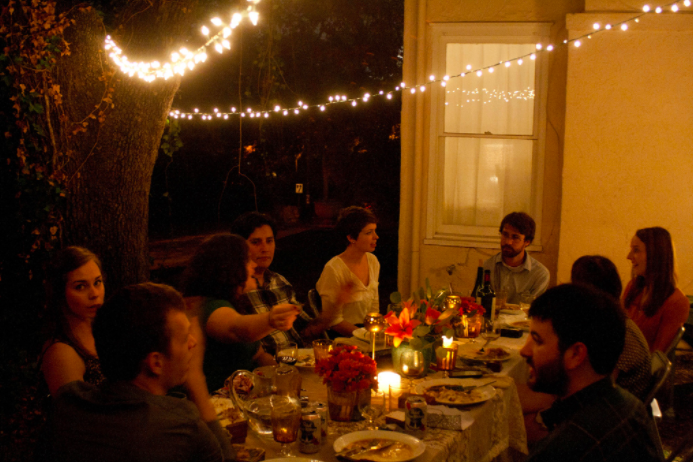 When your partner comes home with you for the first time, try to prepare her. Explain how they still see you as a child: cake and candles, streamers and balloons, bubblegum and colored pencils as parting gifts. Though you’re twenty-three, your father insists, “You won’t be grown up in my book until I’ve walked you down the aisle.” Expect jokes about Clinton’s impeachment and Hillary’s headbands. Anticipate talk of bootstraps—how “some people” have never learned to pull themselves up. On the refrigerator, George and Laura Bush grin inside a heart-shaped magnet. The radio plays Rush Limbaugh all afternoon.

When you get your immunization for yellow fever so you can travel to South America, the CDC nurse says, “We should just stop all planes coming in from Africa.” This is the height of the Ebola health scare in the U.S., with cases in New York and Texas. When she tries to sell you a water purifier to bring on the trip, you explain you are going on a luxury vacation to the Galápagos. You’ve wanted to go your whole life. She says, “Whatever.” Then the nurse in the next office pops in to say, “Hurry up. It’s happy hour.”

When the straight couple sits down at your table, withhold assumptions. When the husband winks, “Oh, you’re together-together,” smile brightly and sip your punch. Try not to notice your temperature rising. Do not speculate if his overshare about his sex life is an attempt to get you to reciprocate. Do not react when his wife tells you about a snippy woman who works in Provincetown. “What? If you’re not gay, you can’t try on the clothes.” Try not to notice your temperature rising. When the time is right, excuse yourself. Find a cooler. Plunge in your face and your hands.

Do Not Remove This Tag

When you make the bed for your out-of-town guest, slide the pillow’s tagged side into the case so the paper flap won’t be visible. Consider the ways in which being a rule-follower have held you back—keeping you stuck in a marriage, or waiting in a long grocery line when you have 11 items and the quick checkout is for 10, etcetera. When your friend starts crying, saying that she is having an affair, do not tag her with a label. Do not envy her drama or bemoan your boring life. Instead, bring her a slice of leftover pie.

When Antonin Scalia dies—the Supreme Court justice who defends fetus rights and denies the rights of women, who calls marriages like yours a “threat to American democracy”—resist the temptation to smile. Remember that death is not funny, death is not just deserts; death is what everyone has coming. Do not jump on the bandwagon, do not post to the comment boards, do not wonder aloud in the company of moderate acquaintances who President Obama will appoint in his place. Remember instead how vulnerable we all are. Say something kind and truthful like “At least he died in his sleep.”

When the bridesmaid you have never met before leans over her Cosmo to say, “You would not believe this lesbian on the plane,” hold your tongue. Remember your friend is getting married tomorrow. Remember this night is for her. When your classmate explains over boxed wine that Roe v. Wade is a national travesty, bite your tongue. Bite it hard. Remember you’re supposed to be having fun. When the waitress pats your bare hand and explains, “Most marriages end in divorce anyway,” remember she is working for less-than-minimum wage. Sip your coffee, not the Kool-Aid. Remember tomorrow is Valentine’s Day.

When men gloat because Gloria Steinem says young women voters follow the boys, who follow Bernie, squat down to pick up the ensuing heavy load of conversation and avoid twisting and turning. Too often you have strained your back hauling crates of feminism and tanks of political correctness. When men remind you of Erica Jong’s faux pas—she said no one knew who Sojourner Truth was until Steinem put her on the cover of Ms.—make a joke that you need to check on the soufflé, that you need to get back into the kitchen where you, a woman, belong.

Hot Surface: Do Not Touch

When feminists are furious with Gloria Steinem for saying young women voters follow the boys, ask if your guests need a drink refreshed, pretend you have something on the stove. Hide your face in the kitchen. You’re supposed to share their outrage, being a feminist yourself, but you think Steinem is onto something. Remember how you once followed the boys, growing your hair out because they liked it long, shaving your legs every day to prevent the troubling stubble. When they ask who you’re voting for, say “Hillary, of course,” but feel free to cross your fingers behind your back.

When the Donald Trump supporter says, “Hey, he’s a self-made man,” try not to think of the vertigo of each illegal worker balancing on the scaffolding around his buildings. Or the lightheadedness of hungry demolition men clocking in twelve-hour shifts to tear down what was there before his Tower. Trump will pay them $5 an hour with which they can buy New York “street meat” and overpriced bottles of water. Don’t think of his bankrupt projects—the Taj Mahal, the Plaza Hotel, his Entertainment or Casino Resorts. Spin the roulette, but know Trump’s casinos only pay out 2.7 percent.

When the banker says global warming is a myth, that weather has always had crazy cycles—Ice Ages, etcetera—slurp the last of your drink and crunch ice between your teeth remembering that his wife said such chewing got on his nerves. “It’s cold today,” he reasons. “Other planets are warming, too.” His wife elbows him, whispers that’s enough. “Volcanoes emit CO2, too, just saying.” We sit waiting for the check at Shuckers Bar and Grill in Miami, the floodplains beneath us growing. A few weeks later, the deck will collapse, and diners will drop into Biscayne Bay’s dark waters.

When your mother says all the people arrested on the nightly news have Mexican names, assess how much she has offended your friends. Will they give her a break because of her age? Will they think she’s instilled that kind of toxic thinking in you? You remember when she almost ran over a black classmate in the crosswalk, then said, “Phew, that was close—I don’t want chocolate syrup all over my bumper.” Tell a story about your mom’s valiant days in the ER where she pumped the stomach of a Vietnamese girl who mistook lemon laundry detergent for lemonade.

Denise Duhamel is the author, most recently, of Blowout and Ka-Ching!. She is a professor at Florida International University in Miami.

Julie Marie Wade is the author of eight collections of poetry and prose, most recently Catechism: A Love Story and When I Was Straight: Poems. Her first lyric essay collection, Wishbone: A Memoir in Fractures, won the Lambda Literary Award for Lesbian Memoir, and her new collection, SIX, was selected by C. D. Wright for the AROHO/To the Lighthouse Poetry Prize.