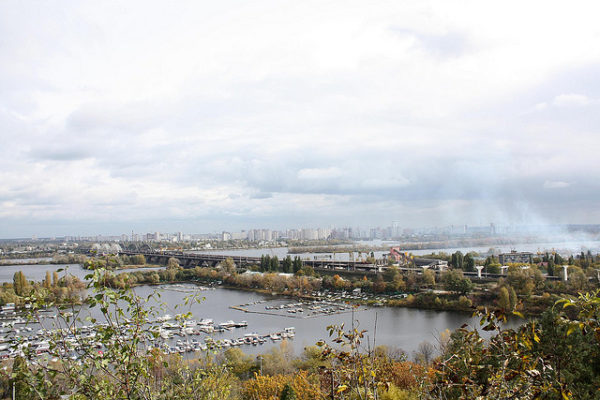 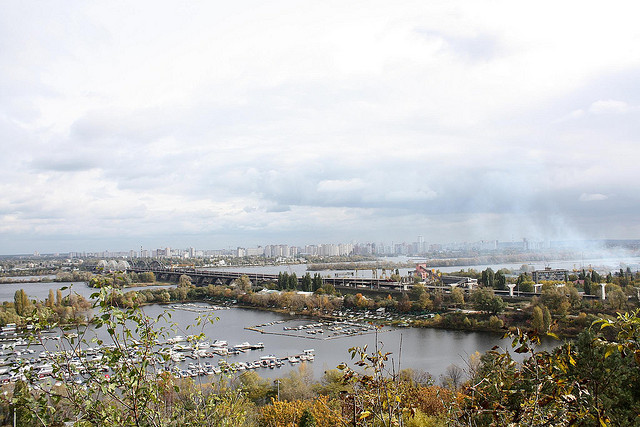 I arrived by evening train from Kyiv, the trees along the tracks slicing through orange light outside my window, an erratic metronome whose meter would set the pace for my three years as a Peace Corps ESL teacher in the village town of Radyvyliv. There would be long camp days with my students stretching into what would feel like weeks, winter flu quarantine days when I would stay indoors to write bad prose until I fell into a deep sleep as the early morning light broke, hours and hours of reading Gogol by candlelight and trying to conjure up some ghost of lunatic inspiration—but in those first few days of struggling to find a grip on the culture, in those first few hours with my host family, everything arrived and departed at a rapid pace. I knew just enough Ukrainian to know how much more I needed to learn, and how little time I had to learn it before I would begin to look like an idiot. Peace Corps had arranged for me to live with a host family for the first month of my stay before moving to an apartment, and I was terrified of insulting these people with my ignorance of all things Ukrainian.

“Is this my stop?” I said to the train attendant, a woman whose every word had sounded, to my unaccustomed ears, like a startled choke. I hovered in the narrow copper-smelling corridor and waited. A door on rusty hinges—from the smell of it, a bathroom door—slammed shut as the wheels hissed to a stop. The woman didn’t look up from her fashion magazine. An alabaster thigh here. The smooth marble of an exposed breast there. Nudity wasn’t a fear in this country. I made a mental check, one of many I’d been making since I’d disembarked from the plane. No leaning against walls or else babusyas would yell about getting dirty. No smiling in front of strangers unless I wanted to be seen as a tourist.

“I’m getting off here,” I said, frowning. “Is is Radyvyliv?”

Nothing. The attendant’s silence followed me down the metal steps of the train, into the street, and across the empty square that echoed with the soft impact of my boots against a thin layer of snow. The square was empty save for a statue of the Ukrainian poet Shevchenko, the man who had replaced the frowning Lenin statues I’d seen in the small nondescript villages of Eastern Ukraine. I knew from Peace Corps training that Western Ukraine was much more anti-Russian than Eastern Ukraine, so it was no surprise when Lenin began to disappear as I neared my site. I made my way across the square with my suitcase dragging behind me, occasionally glancing over my shoulder in hopes of catching first sight of a Radyvylivite.

I stopped near a flickering light post to check my notebook for directions to my host family’s house. Take a left before the Orthodox Church with its onion domes; follow a dirt road to a wide copper gate. Beneath this I had written some basic phrases and some important reminders I’d gleaned from former volunteers. Food: No mushrooms or fish; could be traces of Chernobyl radiation. Esp. no mushrooms; entire family died from one bad forest mushroom. This last bit had been touted as a true story, though many of the warnings I received from volunteers would later turn out to be apocryphal, just so much drama added to what could often be a dreary and monotonous job. Still, the image of the dying family, everyone gathered around a beautifully set table, fighting off a cold night with warmth and light and laughter, each of the members slowly nodding off into their plates, the horror overtaking them in the last second—this had stayed with me throughout the train ride, kept me from a much-needed nap. There was simply too much I didn’t know, too many unwritten instructions, too many ways to fuck up. I turned away from the square and made my way toward the church.

“Dobryy vechir!” my host mother shouted as she opened the door. What followed was a confused flurry of good-evening’s, nice-to-meet-you’s, and happy-to-see-you’s, most of the phrases botched by the time they left my mouth. The family of four: Big Sasha, Ruslana, Little Sasha, Oksana. They stand out in my memory of that first night as a series of pink-hued nesting dolls, matryoshka, each of them lined up in a row and waiting to greet me inside the foyer, their matching smiles formed out of whatever local material gave off such a natural, genuine sweetness at first sight. I felt this infectious smile tickling the corners of my lips. Little Sasha and Oksana were twins, thirteen years old—“born twelve minutes apart, because she’s the slower one,” Little Sasha told me in English just seconds after introducing himself. The parents, Big Sasha and Ruslana, looked to be in their late thirties, a handsome couple with a handsome pair of healthy kids. I could hardly believe my luck. This family had agreed to take a stranger into their home without hesitation. They had agreed to lend out one of their bedrooms, teach me the language and the customs of the town, drive me around wherever I needed to go.

Overwhelmed with gratitude, I tried to shake Ruslana’s hand, but she turned her head away and looked down at the white tile floor. Mental note: no shaking women’s hands. Hadn’t I read this somewhere in my Peace Corps handbook? There were all sorts of customs regarding how men should treat women; it was hard to keep track. Ruslana helped me remove my coat and told me I must have been cold without a scarf. She hung the coat on a peg beside the door, smoothed out the sleeves. Big Sasha nodded his head.

“No, I was warm,” I said in my broken Ukrainian.

“You will,” Oksana said.

“I understood what she said,” I said in Ukrainian. “And I’ll be fine. Thank you.” Though I knew how much I needed to learn, I was prideful of the little I did know. No matter what these nice people said, I knew you couldn’t catch a cold from simply not wearing a scarf.

“Pneumonia,” Ruslana continued. “That’s what happens to people without scarves. Come inside.”

My boots were wet, my socks smelled from the long trip, and I wanted nothing more than a warm shower to wash the layer of grime from my skin, but instead I let this family lead me through an intricate undressing routine. They wheeled my suitcase away to another room. They placed a pair of blue slippers in front of my wet-socked feet, carried my boots to the bathroom to dry on the radiator, pulled the beanie from my head, smoothed out my ruffled hair. It would take a month of living here before I would come to see these gestures for the kindnesses they truly were, to interpret this family’s claiming of my body, my health, as a first step toward the important role I was to play in their lives, and they in mine.

“Come to the kitchen,” Ruslana said.

“The food is going to blow your mind,” Little Sasha said in English. He made a kaBOOM sound and spread his arms out as wide as they could go.

I followed this family into their hot kitchen to a table filled with dozens of tiny plates stacked with rye bread, cold cuts, pickles, tomatoes, cabbage, mayonnaise-slathered salads, and mounds of beet-colored vegetable mixes. Ruslana busied herself with a simmering pot on the stove, Big Sasha poured vodka for me, and the twins took to the benches surrounding the table. We all looked on as Ruslana scooped out steaming dumplings from the pot.

“What do you think of our country?” Big Sasha said, handing me a shot glass filled to the brim with vodka. “Drink up,” he said. “To your health.”

“I love it here. Everyone is really nice.” I gulped down the shot, my throat burning.

“And what’s the strangest thing here?” he said. I’d already learned that Ukrainians love to ask this question. In its most positive iteration, as it was that night, the question seeks to identify what is most unique about the country, what it is that foreigners first recognize as new.

“Everything’s strange right now, right?” Ruslana said, carrying a glistening mound of dumplings to the table. It was true: I was in sensory overload, culture shock. I was trying to take in all of the details. The room was already spinning. I hadn’t eaten anything since boarding the train, so the vodka had gone straight to my head. I sat down on the bench. Everything seemed to be moving at such a rapid pace.

“Oksana, get the mushrooms,” Ruslana said.

Oksana stood and yawned. Big Sasha poured another shot of vodka, slid the glass in my direction.

“I picked them myself,” Little Sasha said. “In the forest.” He pointed in the direction of a large dark mass outside the window, what must have been the entrance to the forest. A few snowflakes licked at the glass behind his arm, slid beneath the sill. The warm kitchen light turned them to flame.

“To your health,” Big Sasha said, downing another shot. I followed his lead.

And as Ruslana and Oksana joined us at the table to eat, the vodka swimming behind my eyes, the mushrooms glinting ominously from the center of the table, I began to form the first of my own set of rules, ones that would follow me through the fluctuations of time and place and the various wrongheaded news cycles about a country split into factions. This beautiful family was here to protect me. They had been picking their own mushrooms for decades. They knew their own land.

Garrard Conley’s first memoir, SIGNS AND WONDERS, is forthcoming from Riverhead (Penguin). His fiction has appeared in The Madison Review and Spork, and he was a finalist in Narrative Magazine’s Winter 2013 Story Contest.