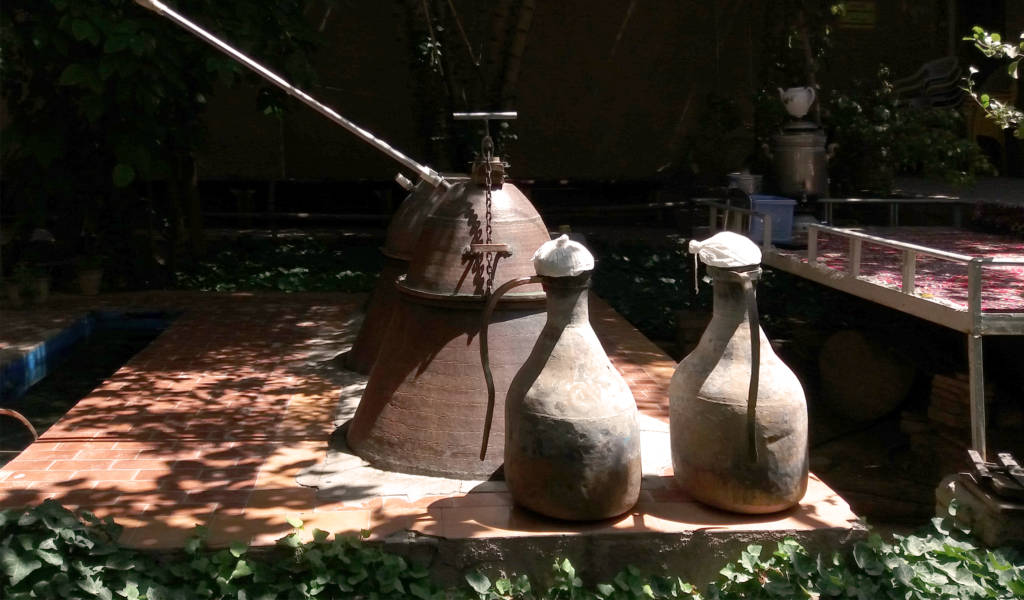 Many years ago, when I still lived in Iran, I went to Kashan to visit a friend who was stationed there to do his post-graduate medical duty. Kashan is a historic city in central Iran, perched between the Zagros Mountains to the west and the Kavir Desert to the east. My friend suggested we go to a nearby city, Niasar, to visit a two-thousand-year-old manmade cave. Mithraic ceremonies had to be held in artificial light and always near a water source, making it necessary to excavate dark, underground caves with water sources available. I had seen other naturally-occurring caves in Iran, but the concept of a subterranean cave handmade by humans for a ritual ceremony sounded much more exciting. I accepted his offer and we made a one-day trip to Niasar in late spring.

As we entered the city, the scorching sun crested the eastern horizon. The aroma of rosewater wafted around us in the quiet early morning streets. Niasar is famous for its rose gardens, and the best rosewater distillates are produced in this patch of land in Iran.

The entrance to the cave was in a rose garden up in the hills that cradle the city. I was expecting a grand entrance, but instead, a local man guided us to a narrow hole in the ground, like an opening to an ancient sepulcher. A small notice board at the entrance mapped the layout of the cave under the hill. The map showed narrow tunnels slanting downhill, allowing water to find its natural way to the river running through the lows of the city. The cave system extended about a kilometer and was vented throughout to allow the worshippers to stay in total darkness for months.

We stepped on a slim metal ladder bolted into the side of the hole to descend into the tunnel. With each step, I felt the sun moving farther away, the warmth of its rays abandoning my face. At the bottom of the ladder, the small chamber around us bifurcated into two narrower burrows. I could hardly stand as I followed the guide, who had no choice but to stoop. Even though I was wearing my scarf and the cloak that is obligatory for women in Iran, I felt the sharp breeze embracing my cheeks from inside the cave.

“Stay close to me,” the guide shouted back at us. “The tunnel suddenly divides into two or three paths and you can get lost and die in darkness.” He cackled, his laughter echoing between the close walls.

As we walked deeper, the flickering, candle-like lamps along the tunnel glowed like stars in a moonless sky. The passages were so narrow that I could easily touch the rocky walls with my arms held close to my body. The damp dirt coated my palms as I gripped the gravelly surface to move on. Many passages ended in small chambers that could fit only a few people.

Mithra followers, in a ritual called initiation, stayed in those subterranean chambers for long stretches of time. The ritual is comprised of seven stages. Every state requires a special liturgy and is named after a specific planet. Followers began the initiation by being baptized in the water that flowed through the cave. After the baptism, they stayed for long periods of time in small chambers with frescoes on the wall, showing Mithra slaying a bull.

In some passages, the tunnel became so low that we could not proceed without crawling on the ground. Claustrophobic all my life, I regretted my decision to descend into this suffocating cave. The guide, who noticed my trembling voice and shaky hands, assured me that we would reach the exit in half an hour. All through the journey, I thought about the initiation ceremony held in darkness, and the Mithra worshippers crawling into these deep, damp dungeons for prayer.

Finally we exited the cave, along a wisp of a waterfall that merged into the river below. The sun was a blinding deity for me, pouring sacred rays on my skin. It caressed me, combing the locks of hair pressed between the scarf and my scalp. Suddenly, I saw the logic of Mithra’s worshippers: I would have lived in total darkness for months, just to climb out of the cave, rung by rung, and cherish the warmth of the sun on my skin. In that state of mind, after months of deprivation from light, I would have been able to fathom the magnificence of Mithra’s eternal light.

We trudged uphill to return to the cave entrance, where we’d parked our car. The roses were in full bloom, shining in porcelain white and blush pink. The sun had bestowed its blessing on these petals: they were ready to be plucked, to pour their essence into the rosewater. We bought two bottles from the orchard’s store. Their sweet scent filled the car for the drive back to Kashan.

[1] From Avesta – Mihr Yasht or the Hymn to Mithra.

A native of Iran, Mojgan Ghazirad graduated from Tehran University with a medical degree. She did her pediatric residency at the Inova Fairfax Hospital and received her neonatal medicine specialty from the George Washington University. She currently works as a neonatologist in Washington, DC. Her short stories have appeared in Persian literary magazines such as Zanan and Hengam. She has published three collections of short stories in Farsi in Iran and Europe. She holds an MFA in creative writing from Southern New Hampshire University and is currently working on her memoir, The House on Sun Street, which depicts her memories of growing up in Tehran during and after the Islamic Revolution in Iran.