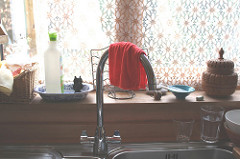 When my nineteen-year-old son turns on the kitchen tap

and leans down over the sink and turns his head sideways

to drink directly from the stream of cool water,

who used to do the same thing at that age;

and when he lifts his head back up and, satisfied,

wipes the water dripping from his cheek

with his shirtsleeve, it’s the same casual gesture

my brother used to make; and I don’t tell him

to use a glass, the way our father used to tell my brother

when he was young, decades before anything

went wrong, and I like the way my son

becomes a little more my brother for a moment

through this small habit born of a simple need,

which, natural and unprompted, ties them together

across the bounds of death, and across time . . .

as if the clear stream flowed between two worlds

and entered this one through the kitchen faucet,

my son and brother drinking the same water.

Jeffrey Harrison is the author of four full-length books of poetry, The Singing Underneath (1988), selected by James Merrill for the National Poetry Series, Signs of Arrival (1996), Feeding the Fire (Sarabande Books, 2001), and Incomplete Knowledge, (Four Way Books, 2006). In addition, he published the chapbook An Undertaking in 2005, and in June 2006, The Waywiser Press brought out The Names of Things: New and Selected Poems in England.
[Purchase your copy of Issue 06]