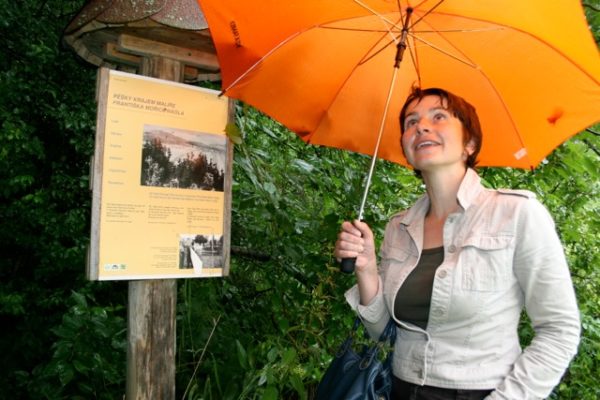 In Telč, a town about two hours from Prague in the Czech Highlands, rain beat down like a parade of drums. Zdenka Noskova, the woman I had come to see, arrived at my hotel in the main square to take me to a memorial she had created.
At 37, Zdenka had a demure manner. She wore her auburn hair short, and dressed in a long skirt. She worked in a print shop, though the lasting imprint she’d made had been a walking trail, and later, a memorial she’d created to the memory of a Jewish painter who died in the Holocaust.

Czechs had lurched toward independence for a century. They were crushed by the Nazis, and then oppressed by the Communist Party with a brutal internal security apparatus and fearsome prisons. In 1989 they gathered in a nonviolent uprising that became known as the Velvet Revolution. Twenty-odd years later, many Czechs were plumbing their history, including people like Zdenka, whose endeavor was both unique and typical.

As we drove out of town to the memorial she talked about the ebullience of the Velvet Revolution. She recalled the celebrations, though not everyone participated. Her father, a Communist official, hadn’t. Loyal to the Party, he spurned the party, pulling down the window shades as if he was in mourning, and then sitting at his phone and dialing people he knew. He wasted no time setting up a business. He did well.

“So he became a capitalist?” I asked.

“No. He still says he is a Communist—a Communist businessman.”

We pulled into her village, Kostelni Myslova, a pastoral scene of meadows divided by stacked stone borders, and old houses with dark, slanted roofs. After parking the car, we took shelter from the rain at a bus stop. 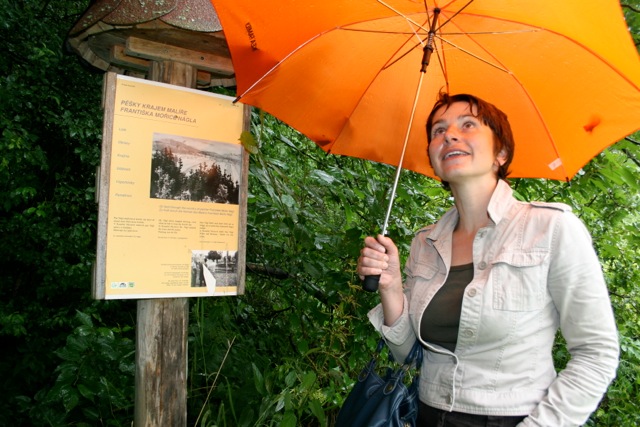 Just after they married, Zdenka’s husband brought her to Kostelni, whose population consisted of 50 mostly old people. Boredom and isolation made Zdenka swoon into depression, and she’d sit for hours by a window looking out onto a crumbling old farmhouse at one end of the one-street village.

One day she began investigating the ruin. It had belonged to a man named Frantisek Nagl, who inherited the land and lived there with his wife and two children. He had no enthusiasm for farming. He loved to paint.

The neighbors regarded him as different—and not only because he was an artist. It was also because the Nagls were Kostelni’s only Jews. After the German invasion, the Nazis found them and put them on a transport to Terezin, a concentration camp near Prague, and then to Auschwitz. The whole family perished.

Five years after Terezin was liberated, 250 of Nagl’s works, an archive of watercolors and gouaches of the barracks, bunks, and courtyards, were found hidden in a wall in the camp.

At first no one welcomed Zdenka’s curiosity about Nagl. She wondered what secrets people had that they didn’t want to dredge up the past. It was an unfortunate truth in small towns all over Europe that people had profited from the Jewish tragedy, inheriting property whose provenance they didn’t want to be reminded of.

But Zdenka had only yearned to know, and then to remember and honor Nagl. She decided to create a memorial trail. It runs for several hundred yards through a meadow and a patch of forest and is posted with plaques about Nagl.

“The trail is not the best thing in the world,” she said. “It is very simple. But you cannot understand six million. You can understand one person.”

Eventually people started traveling to Kostelni to see it.

Zdenka wrote a biography and created a second memorial in 2002, along with Phoenix Telč and Phonix Berlin, civic associations that preserve Jewish history. Volunteers came to help plant fruit trees to line the road leading up to the memorial, which consists of a simple stone table and benches surrounded by Lindens, the Czech national tree. It stands at the peak of a hill where clouds hang low over meadows. On the day I saw it, a curtain of mist fell over the ridge of hills that roll into the distance.

“Nagl loved to paint here,” Zdenka said. It was his own Mont Sainte-Victoire.

Then, one day after the memorial had been there a while, vandals marked the surface with a swastika.

But by then Zdenka had achieved something unlikely: she had revived Nagl in the hearts of her neighbors. She had rendered the artist, made him visible. And now they came out, many of the same people who had opposed her quest, to scrub the memorial clean.

Zdenka had often wondered about Nagl’s appearance, but the only photograph she had ever found showed only his back as he painted at an easel. Then, after news coverage of the community’s response to the vandalism, an envelope arrived out of the blue. It was his picture.

“It is hard to explain how happy it made me,” she told me. “After all this time, I finally knew what he looked like.”

Todd Pitock is a writer in Philadelphia whose work has appeared in The Atlantic, Discover, and The New York Times, and in anthologies including Best American Nature and Science Writing and Best Travel Writing.
Photo by Todd Pitock