Late afternoon, late January. I need air, exercise, but my regular walk around Al Manhal Palace is too long; the construction en route to the Corniche too hazardous to navigate. I try to take comfort in the company of my own mind, but today I am a terrible person to be with. Wandering, uninspired, brain-stuck, I find myself in the middle of ten lanes of traffic on a median barely wider than a balance beam. Grumpy as all get out as hot exhaust blasts me by. I need to move, but I have nowhere to go.

I don’t know it yet, but what I need is a dérive.

A dérive, I discover, is something you do. It’s a playful exploration of urban space, a game. It is an app you download from the Internet consisting of a random set of instructive pictorial cards called a “deck” that lead you around a city. Designed by architect Eduardo Cachuco and programmer Babak Fakhamzadeh and launched last fall, Dérive is a way for city walkers “controlled by our day to day activities” to break free. Come all ye bored, timid, or fed up. Let the French show you how to walk.

Literally drift or drifting, a dérive is based on a theory of urban encounter established by the Situationists International, a group of Europeans, mostly Frenchmen, formed in the 1950s and spearheaded by Guy Debord, perhaps best known for his book The Society of the Spectacle. Debord was appalled by the complacency of his fellow urbanites, who did not notice such features as “the sudden change of ambiance in a street within the space of a few meters [and] the evident division of a city into zones of distinct psychic atmospheres.”

To understand that there is much more to the pleasure or gloom of any given street than the wealth of its inhabitants or its architectural style, he vigorously advocates an “insubordination to habitual influences.” Debord’s writing is frustratingly stuffed with unhelpful terms such as “psychogeography” and “unitary urbanism,” but his exhortation to shake things up is well taken. We are creatures of habit, and sometimes a little force is needed to see not only the ordinary but the everyday strange in a fresh light.

A dérive is distinctly not a guided tour. It does not point toward or provide information about particular sites of cultural or historical interest. A dérive is a practice, not a route. The deck is a guide to getting lost, to noticing. The standard Dérive deck designed by Cachuco and Fakhamzadeh is composed of “instigator” cards such as “Turn right at the next intersection,” “Follow something red,” and “Pick up a piece of trash.” These instructions are meant to engage not only in a city’s infrastructure but also in the moment-by-moment activity of the street. The route you trek and the pictures you take along the way can be recorded on the Dérive website (photos are shared through Flickr): the app is designed to be shaped, shared, and expanded by users around the world. The first international Dérive Day was held in January and involved 60 people from 23 locations. Isabel in Toronto said about her dérive of 3494 meters, 206 minutes, and 46 cards, “Turning left and right onto random little streets caused me to uncover hidden gems—interesting houses, street art for a cause, random encounters with various Torontonians (which unfortunately can’t always be captured in a photo!).” The unrecordable moments are also part of the point—cities are composed of the fleeting interaction as well as the monumental.

Beyond this global, digital engagement, the Dérive founders will come to you and host a weekend-long intensive workshop to help develop a dérive for your particular city. In early February, they were invited to NYU Abu Dhabi by two colleagues who study Middle Eastern urbanism and mapping. After a slideshow tour of the app and a brief history of Abu Dhabi urban planning, we were to break into small groups of two or three—the number strongly recommended by Debord—and “do a dérive.” But immediately we discovered a problem. To use the app, we needed consistent Internet access. Because our group of students and faculty was both highly international and frugal enough not to have sprung for the UAE national carrier’s pricy data plan, only three out of about thirty participants could download cards from the deck once outside the NYU wifi zone, and one of these three was Fakhamzadeh.

Though our crew worked hard to make group decisions, Debord’s prediction that a collection of drifters greater than ten inevitably fragments proved to be correct. Without a leader or guide—anathema to the mission of a dérive—we dissolved into side conversations and puddled like raindrops in the middle of the sidewalk, wondering where and how we might comply with the instruction to “find a crowd.”

Our second challenge, however, was not technological, but the scale, layout, and character of Abu Dhabi itself. The city’s fundamental unit, the superblock, equivalent to about twenty Manhattan blocks, meant that our group quickly dispatched with task cards without entering different environments. The superblocks are too long to rely on directional cues like traffic signals and street signs more frequent in traditional European cities. Corners are made for careening cars, not for folks to congregate. While there are small squares of benches and a few parks, there are few gathering places ripe for people watching. Superblocks also contain little variation. The row of buildings fronting the main roads gives way to an interior of parking lots and building backsides featuring more of the same kinds of shops as in the front. I suspect Debord could not imagine an oil-rich, start-up city like Abu Dhabi populated with so many low-income guest workers all in need of copying and typing services, tailors, cheap watches and cell phones, and juice and shwarma stands. Finally, walking on interrupted sidewalks along main roads chocked with reckless cars—especially while attending to a hand-held device—can be a risk to life and limb.

How, then, do you create a successful dérive in this city?

This was the group’s challenge. The deck had to be general enough to give rise to varied, random journeys and specific enough to be more interesting that setting off on one’s own. A dérive provokes attention to both permanent features of the city landscape and the flow and tenor of a place’s people.  So what kind of cues and visual elements should be used? Architectural elements or culturally specific features? What “instigators” were likely to provoke encounters that were both innovative and acceptable in a place where the police frown on taking pictures of government buildings? I also found myself wondering, Why do a dérive at all? What’s interesting or pleasurable about being told what to do by an unknowing deck? 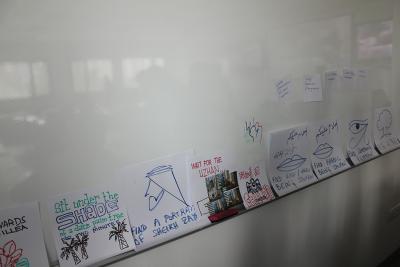 The cards the students and faculty developed, which can be viewed here online, show remarkable creativity and insight in tackling these issues. They absorb the natural and man-made landscape–“Find a palm tree and sit in its shade, listening to the rustling of the leaves”; consider religious and cultural influences–“Find something that is ‘Ladies only.’ If you are the right sex, check it out”; and engage with local populations—“Hang out in a shop selling tea. Maybe get a chai.” The cards are specific but allow plenty of space for spontaneity. Following instructions, we realized, makes overcoming ennui so much easier.

The Abu Dhabi deck is still being integrated into the Derive website, and without Internet access on my mobile I can’t use the app here anyway, but it’s important to remember that a dérive is just a tool. As such, one should be able to extract its key features and improvise.

Usually I prefer a route, a destination, because it allows my mind to wander while my feet direct themselves.  This, however, is antidérive. Before the workshop, I had not made much Debordian “progress” in recent walks. I had not let myself succumb to the randomness that would provoke new observations. I’d come to think the available observations exhausted.

Another late afternoon, again heading out into the day too late wrestle much from it, my skin goosebumped in a rare, cool breeze. I decided that, at the very least, I would walk in the sun, wherever that took me. One simple, instigating condition. A decent distance later, having kept to the south side of the street, an intersection of tall buildings thrust all possible directions into shade—except for that patch of low…houses? Were these single-family houses in an area I’d always thought to be rambunctious with apartments and offices?

Yes. And the deeper I penetrated, the traffic noise faded and was replaced with glimpses of domestic life: a father wedging his daughter into a car seat, a scholarly Muslim man with his hand wrapped around a briefcase, a three-spigot metal fountain outside the gate of a house, inside the gate an open door revealing a tiled entryway. I passed several signs for embassies, including one country I had not known existed. What about these scenes was shocking? Simply that I had not imagined such quiet recession inside the city’s superblocks. Abu Dhabi has ample luxury, if you’re able to pay; it’s ease that’s infrequent. It was ease that I had not found.

Debord says a dérive may have one of two goals: “to study a terrain or to emotionally disorient oneself.” They go together, though, don’t they? It’s the emotional disorientation that leads to study, though perhaps not in the dramatic or systematic or sense Debord had in mind. Learning and adaptation take great strides on the backs of such miniscule discoveries as mine, this neighborhood pocket of villas, schools, and embassies. In my case it was unexpected comfort that I discovered via disorientation. When I returned home, I looked out our highrise window and saw what I’d previously overlooked, where I had been—a pattern of low-lying rootops and narrow streets lying patiently in wait.