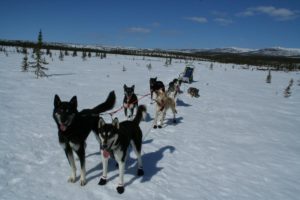 How long have you lived here? 10+ years

Best time of year to visit? Most people visit the Denali region in summer for its (relative) mild climate, tourist infrastructure, and obvious charms like the midnight sun. But summer also means mosquitoes, crowds, and more overcast weather. My favorite month is March: full-on winter, often with the deepest snowpack of the season (great for skiing & dog-mushing), and 12-plus hours of gorgeous winter daylight. Also, if it’s not snowing, the skies are crystal-clear for views of the Alaska Range by day, the aurora borealis at night. Be warned, though, I am a winter-lover so I am biased. And it can be -40F in March…

Tundra and sky. Healy sits in the taiga, or boreal forest at the northern end of the Nenana River canyon, a cleft in the Outer Alaska Range. Taiga is a Russian word of Turkic origin that means “land of little sticks.” I live about six miles NW of Healy (pop. 990) on a tundra bench where you see mountains to the south and east and open tundra and huge sky in all directions. It’s hard to explain how vast it feels. Also striking, if you know where to look, is the view to the east where you can see both the largest coal mine in the state, and a new wind farm with 12 wind turbines. It’s a mash-up of the 18th and 21st centuries.

2) Historical context in broad strokes and the moments in which you feel this history. . .

Recent human history: Healy was settled by a family that started a coal mine on a rich seam across the Nenana River. It has morphed a bit from those origins but can still feel like a company town.

Natural history: The effects of glaciation are obvious everywhere—huge gravelly river bars, kettle ponds, and erratics (boulders left behind when glaciers recede). Natural history is also recent history: this fall month we had a 6.24 earthquake, epicenter about 100 miles south. Whoa.

Alaska’s deep roots in indigenous subsistence practices influence the whole state’s food culture; local and wild food is a big deal to residents, increasingly so in the 12 years I’ve lived up here. One statistic I’ve read is that rural residents of Alaska harvest 22,000 tons of wild food per year, or an average of about 375 lbs per person. Across class, ethnicity, and political affiliation, people participate in food-gathering rituals: salmon fishing; hunting for moose, caribou, Dall sheep, and grouse; foraging for blueberries and low-bush cranberries; raising chickens; keeping bees; growing gardens; canning and preserving. Gathering and preparing wild food is one of my favorite things about living in Alaska.

Of course, there are Doritos and Pilot Bread too, and Alaska is far from food secure. A huge percentage of our food is produced thousands of miles away and groceries are expensive. But the conversation is definitely shifting. There’s even a CSA in our watershed now, off the electrical grid and built entirely by hand.

4) Local politics and debates frequently seem to center on . . .

Federal wilderness, state land, and wildlife management issues. Alaskans live closely with wild creatures, and we treasure them as neighbors, but we also hunt and trap them and protect ourselves from them (bears kill chickens; moose threaten sled dog yards, etc.). So wildlife management & preservation is a constant discussion. Another big issue is energy production and extractive industries. Fracking, coal bed methane, a gasline, a dam, coal mining, dirty power plant emissions, and a wind farm have all been debated in the decade I’ve lived here. It’s very similar to what the rest of the country is grappling with: the constant balance of meeting the energy needs we’ve become accustomed to with figuring out more harmonious, reasonable ways to live. I really value our local citizens council, made up of residents, and integral for keeping tabs on the issues that affect our bioregion.

5) Common jobs and industries and the effect on the town’s personality. . .

Healy has two main industries, polar opposites. One, as I mentioned, is the Usibelli Coal Mine. The other is the Park Service, which manages Denali National Park. Healy is a mix of miners and “parkies,” groups that generally have pretty different politics. But the divide is less stark than it might seem. A friend of mine’s father worked at the mine his whole life and she was a seasonal ranger in the park for years. People up here are complex; though we are passionate about things we disagree on, a small, remote place requires neighborliness. Despite social bifurcation, we play on the same hockey team, send kids to the same school, use the same library and health clinic, go to the same fundraisers. We rely on each other. You help a neighbor put a roof on their cabin with a “sled-neck” on one side and a “granola” on the other. A recent funeral for a beloved local woman drew a cross-section of people that conventional wisdom says can no longer be in the same room. Fairbanks, the nearest city, is two hours away, and if you need a ride to the airport or your car breaks down in the winter, nobody withholds aid because of politics. Up here, physical survival often still trumps ideology.

Christine Byl is the author of Dirt Work: An Education In the Woods, which was a finalist for the 2014 WILLA Award.