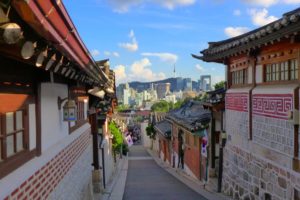 How long have you lived there? Outside of my schooling years (elementary school to university), and a year in Rome, I’ve lived in Seoul all my life. So that would make it over half my life?

Best time of year to visit: I wouldn’t miss the autumn for the incredible mountain foliage throughout the country, as well as in Seoul.

1) Historical context in broad strokes and the moments in which you feel this history:

Korea has been divided into the North and South since the Korean War. The division is much more resilient and much more sharply isolated than East and West Germany ever was, and its traces can be seen in peoples’ lives and in the country’s politics. I feel it most through my North Korean friends who have fled to the South and through acquaintances and family friends who have still never been able to meet their family members living in the North for over fifty years, and probably never will. It is impossible to live in Seoul and not be aware of the paranoia and misunderstandings that happen on both sides. Most recently, while waiting for a bus returning to Seoul, I saw dozens of separated elderly family members at the Hanhwa Resort in the Seorak Mountain area in Gangwondo, the province in South Korea closest to North Korea, waiting to be reunited with their North Korean relatives for the first time since the war.

2) The most striking physical features of the city are:

I cannot think of Seoul, or South Korea, without associating it with mountains. What I love most about the city, and what distinguishes it from cities it is often compared with, such as Tokyo, is that it is built around and through mountains. Nearly each neighborhood has a small residential mountain or steep hill near it, or is even built along the length of a mountain. Even the university where I teach is framed on two sides by a mountain and is actually built along what must have once been a small mountain. There is still a wooded area in the center of campus that preserves the original topography, which is one of my favorite places on campus to pass through and say hello to a boulder or two.

3) Common jobs and industries and the effect on the city’s personality:

Occasionally it feels as if most people either work for or within a Samsung- and Hyundai-related industry or aspire to work within these conglomerates. This is hyperbolic, and yet, most of the country’s largest conglomerates have some association with these two companies, and thousands of other small firms depend on the country’s two largest firms for the bulk of their orders. There is even a local term called, “Samsung Gonghwa-guk,” or the Republic of Samsung, as a direct result. In reality, of course, the city of over 12 million people is made up of diverse personalities and fields, but the perception of these supersize conglomerates having enormous influence over the nation persists, much like the military industry in America casts a vast shadow over the economy. I’m not sure how it affects the city’s personality, except to say that the city does seem divided by those who are tied to these vast corporate structures and those who freelance and live a liberating and more precarious life. This reflects how I perceive Seoul through my crooked vision, and maybe reflects the way I view all cities and societies in general as divided between those who exert power, those who desire, are complicit, or are pressured to comply to that power.

The city seems to be built metaphorically around food, which is also a synonym for pleasure. One can have a meal with friends, then move onto drinks and order a snack, which is essentially as large and filling as another meal. Food doesn’t feel like food unless the table is heaped with options, in addition to something spicy. Each quiet neighborhood will have dozens of tiny eateries, a few fried chicken and beer joints, a bar, and the local convenience store that stays open for 24 hours with tables outside and up front so residents can buy a cheap snack and drink together. Once you hit livelier, more traditional nightlife districts, the number of 24-hour establishments is endless. As Seoulites like to say, NYC feels like a lower-key version of Seoul.

5) Local politics and debates frequently seem to center on:

Local politics and debates frequently seem to center on the same thing that the politics and debates focus on anywhere in the world: gaining power and positions within the Senate, the municipal government, and so forth. All subjects are essentially an excuse, a vessel and a means toward gaining and retaining this power. Even the great catastrophe of the Sewol ferry that sank last year in the East Sea and included dozens of student casualties on a school trip, has descended into a game of finger-pointing, and even strategizing to either use or deflect the victims’ families. The latest “subject” that seems of national concern is the lack of jobs for graduating college seniors, which is directly tied to the stagnating economy. The window of time for college students to prove themselves in Korea is very narrow, and in one of the most academically competitive climates in the world, it’s been alarming for me to see students at Korea’s top universities unable to find employment. It’s certainly a concern for many today, but whether the actual politics and debates really care is doubtful.

Krys Lee is the author of a forthcoming novel (Viking, August 2016) and the story collection Drifting House, which was awarded the inaugural Story Prize Spotlight Award and the 2014–2015 Rome Prize in Literature.