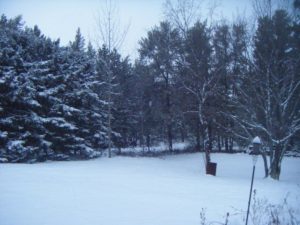 How long have you lived here? 4 years

Best time of year to visit? July for warmth, October-May for snow.
1) The most striking physical features of this city/town are . . .

Along the shores of the inland lakes and rivers, where the fishermen fish, fisherman blood and whitefish viscera.  In fact, the other day, night-fishing during a waxing gibbous moon, I impaled my thumb on a fish-hook, while a red-headed woodpecker spat at a dark-eyed junco—the birds, and the spitting itself, were both striking and physical. I bandaged my wound with a tuft of foraged pinkstink dung moss—another one of this area’s most striking physical features. The new spring flies, which are also one of this area’s most striking physical features, were having a field day.
2) The stereotype of the people who live here and what this stereotype misses.

Because we have a bit of wildlife up here, and because we talk a lot about rabies (it’s common to hear such a “rabid” conversation in the supermarket produce aisle over cantaloupe squeezing), the stereotype is that we fear rabies, but we don’t—not even from bats so much. The lack of fear may due to the fact that the six-page Department of Natural Resources Wildlife Division Report #2946, dated May 20, 1983, on Rabid Bats in Michigan’s Upper Peninsula is an abridged version, the fire and brimstone bat-rabies rhetoric having had been combed-out of the original unabridged version, which I have had some trouble getting my hands on. That’s another stereotype.  That we have trouble getting our hands on things. That’s usually because of the frostbite, though.
3) Historical context in broad strokes and the moments in which you feel this history. . .

Though the U.P.’s last copper mine closed in 1996, from 1843 through the 1920’s, pure native copper just about leaked from the earth up here, exploded from it, and towns were established and boomed, and folks ate food and drank liquor and men spread their legs and women spread their legs and with food and liquor and spread legs made descendants who can visit these towns in the name of communion and reunion and union and none, and we call these gatherings heartfelt and we call these gatherings historical, and we use words like ancestry and inheritance and we stand on the rock piles and bluffs and tailings of Central Mine and Gay and Mandan and Cliff and Delaware and Phoenix and we eat pasties not because we need to, but because they are some sort of souvenir, some kind of shaft that leads, definitively down, toward something like heritage or lake-bed, something makeshift, but geologic and collapsible, and we pretend that these towns are not popularly preceded by the word ghost. I feel said history most when I’m fishing at night in Bat Lake, because I can see the mine from here, the red lights of it.
4) Common jobs and industries and the effect on the town/city’s personality. . .

The U.P. pasty is very popular.  When compared to the Cornish variety, it contains larger chucks of vegetable, a higher ratio of vegetable to meat, encased in a thinner crust. The U.P. pasty is thin-skinned, even in all of this winter, the weather, and the water of Lake Superior, closer to the blood.
6) Local politics and debates frequently seem to center on . . .

Bats and bat-rabies, again.  There’s still a lot of talk in the bar-booths about the rabid silver-haired bat of Escanaba which, in 1968, ignited an epidemic with legs—the sort of epidemic the DNR is compelled to call “unfortunate,” inspiring them to devise all sorts of contemporary rabies tests for bats, using such classic methods as “impression smears of brain material,” and “3-pound coffee cans containing chloroform-saturated cotton balls.”  This is local politics at its most Chiropterac.