Part 2:  Where I Live and What I live For

Inspired by rereading Thoreau’s Walden for the first time in 30 years, I am writing a series of essays—an attempt to sample Thoreau, and swing the rhythm. I want to honor the young idealist with echoes of his aphoristic style and, at the same time, challenge his lofty ideals with the experience of an older woman.  Click here to read Part 1.

In the early years of our marriage, Andy and I used to rent a house for two weeks in the summer in Lubec, Maine, as far Down East as you can go and still be in the U.S. It was a canning town—sardines. We thought of it as a paradise that was our secret. We could ride our bicycles out to lighthouses in two different directions, walk through a bog full of the carnivorous sundew and pitcher plants and cross the bridge to Campobello Island, New Brunswick, where, sitting on the cliffs, we see could see Finback whales spouting and diving on the horizon. When we started going there, only one canning plant was still in operation. The last year we visited, that too was closed. On our walks through town, we found that nearly every other house was for sale; but when it came down to it, we couldn’t buy one. We’d always be from “away,” but we’d lose our status as strangers. And, there were the seven hours of highway between me and my sisters.

On the road, I want my family. Once home, I wait for strangers: the knock early in the morning to announce I’ve won the sweepstakes; the door breaking down at night, sending me under the bed. We all wait—for angels, for extraterrestrials. In towns like Lubec, they think of cities like Boston and Cambridge as communities of strangers, but in my over-plotted life, I’ve found them rare as intimates: so we qualify them as  “real” friends, and “complete” strangers.

For as long as I can remember, I’ve wanted a getaway: a mountain cabin, a beach shack; a Walden. I grew up as one of five sisters in a small house. My parents enforced a primitive communism. We handed down clothing, shared books and toys. My mother used an egg timer to give us equal time with the basketball. If there were one cookie left on the plate, she would divide it into five pieces (in my drinking days, I indulged nostalgia and bought my whiskey in fifths). I can’t remember having a thought of my own until I went away to college. In my early imaginings, I lived in the wilderness alone with miles between my nearest neighbor and me. As a Christmas present one year, my mother gave me a subscription to National Wildlife. I remember reading an article on edible plants and thinking I would need to memorize it.

I can’t think of Emerson’s call to self-reliance without remembering, along with the excitement, the fear and loneliness of leaving home for the first time, the struggle to claim the “I” and think of myself in the first person. Reading the Transcendentalists for the first time, I wondered how I could get through a semester, much less four years of required reading.

I tried so hard to wring Emerson’s “Nature” of meaning that I couldn’t enjoy the twists and turns of its sentences, but slipped from abstraction to abstraction, attaching only to the quotable aphorisms. I identified with the dunders, the “little minds” of  “unrenewed understanding.” It would have helped if I had read the essay out loud. I think it might have helped too if I had grown up listening to the rhetoric and rhythm of sermons, but the necessary gesture when leaving our Catholic church was genuflecting to the altar not shaking a preacher’s hand. I even self-forgetfully genuflected to the movie screen during my first week at college when I went with a roommate to a matinee of Woodstock.

By the time I graduated, I was full of myself, convinced that I was jigging to a whistle at a frequency few could hear. In fact, I’ve struggled my whole life to separate myself from the corporate personality of “the sisters.” I’ve understood only as I’ve gotten older why throughout my life I’ve resisted joining a club or supporting a cause—I’m already committed. As a college student in the early 70s, this fear of enmeshment overrode the real guilt I felt at not being part of the organized resistance to the Vietnam War.

Fairhaven, our getaway now, is on what we call here the “South Coast.” Our town is on one side of the New Bedford Harbor, the city of New Bedford on the other. Depending on where you’re standing, the Harbor is either an estuary of the Acushnet River or an inlet of Buzzards Bay. I can walk down to the bottom of our parking lot and look across the river to the fish-packing plant and an old mill building now converted to apartments. I can step out on our fire escape and look past the bridge and across the harbor to the fishing fleet docked on the New Bedford side.

Looking at the map of Massachusetts, Cape Cod is an arm stretching east and then flexing to the north. Buzzard’s Bay is the armpit. No one admits to seeing a buzzard here. As the story goes, the captain of the first boat to enter the harbor mistook a cormorant for a buzzard.  When we were younger, my sisters and I avoided the Bay and drove the extra hour down the ocean side of the Cape. There we would walk miles down the beach looking up at the mansions built on the bluff and the shacks built on sand, always on the outside looking in and feeling the sadness of the visitor.

At my age, I’ve given up illusions of ideological and personal utopias, communities of enlightened men, visions of myself walking on the beach alone with my dog. Here in Fairhaven, we walk through town past the VFW, the motorcycle repair and body shops, the marina advertising itself as “owner recommended,” past the shipyards, rigging lofts, welding shops and dry docks. We look through the chain-link fence at piles of stacked propellers, each with the name of its boat scrawled on the blades in black marker, “Zeus” on top of “Fatima.” Behind another, huge spools of nylon twine in all gauges and colors are unwinding. We can walk down the street of summer “cottages”—mansions with their own docks—and all the way to the outer harbor. Or we can walk over the bridge to the news store that sells everything from porn and fishing magazines to literary journals and, in the next block, the strip club with a marquee that advertises “pajama parties” and “prime rib dinners.” A few minutes beyond that and we are in downtown New Bedford. 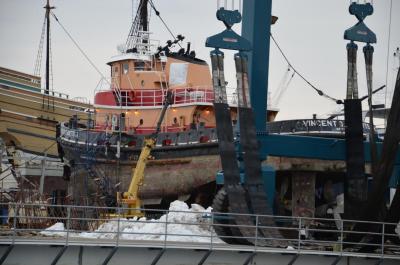 On Saturday afternoons, we stand at our front window and wait for the brides. Henry Huttleston Rogers, a local boy who left the whale oil business and split for Pennsylvania once petroleum was discovered there, came back as an executive of Standard Oil and, maybe feeling guilty, donated a number of buildings to the town, including the high school. Wedding parties from Fairhaven, New Bedford too, line up to have their pictures taken in front of the Tudor-Gothic building with its red brick, gabled roof and copper cupolas, downspouts and gutters. During the summer, we’ve seen as many as five wedding parties in turn.

It took me a long time after I started coming to Fairhaven to recognize that what I felt here was ordinary happiness. I am fascinated by the stories of those middle-class students of my generation who in their struggle for civil rights and to end the war became committed radicals, stealing munitions from a National Guard armory, handling bombs that did or did not go off, shooting a policeman while robbing a bank to buy arms for the struggle. Those not caught went “underground,” adopting the rude habit common among epic heroes of allowing themselves to be entertained in foreign ports without identifying themselves: the shipwrecked Odysseus in the court of the king of Phoenicia wanting to know what his reputation was among strangers; Aeneas hiding behind pillars in Dido’s palace listening to the women gossip about him. Somehow, a quarter century after the war ended, they emerged as gourmet cooks, soccer moms, and math teachers. What gave them back their ordinariness? I believe it was as much the places where they settled down as the time that had passed.

Weekends are a time to lose the “I,” a little practice for death. In late middle age, everything is a sampling and enlightenment, a thank you to those whose work I riff on. It is in Fairhaven that I finally learned the difference between flotsam and jetsam. Jetsam is what is thrown into the water; flotsam what floats off the back of boats. We clean up both from our beach: the beer bottles, boots and air conditioners; the old buoys, rope and netballs. I’ve started collecting fragments of china in different patterns and displaying them on my kitchen counter. I like to think they are flotsam from an old shipwreck or maybe jetsam from the 19th century when women would throw their dishes into the sea, believing them to be contaminated by a family member sick with TB or scarlet fever. The past is a backwash we pick through; the moment, a tide that claims our remnants.

Anne Welch lives in Cambridge, Massachusetts but is at home on the South Coast of the state in Fairhaven/New Bedford. She credits studying the descriptive language in Darwin’s Voyage of the Beagle and Huxley’s The Crayfish for teaching her to write with precision and consider her essays as experiments. Her essay “Lady Undressing” received special mention in The Pushcart Prize XXIV and was listed as a “Notable Essay” in The Best American Essays 2009.