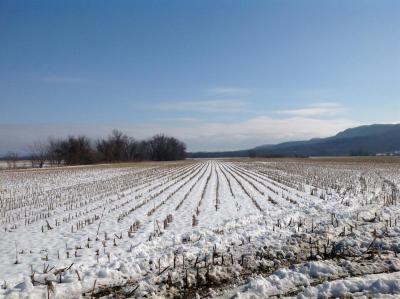 Beyond the bridge of Highway 91, beyond the levee and the last line of houses at the outskirts of town, civilization goes to rural scenes. First you pass a patch of low trees; then a small paddock and barn where two horses live; and then you come to the cornfields — wide, flat, golden and stubbly by the riparian woodland of the Connecticut River. I’ve always wanted to come to these fields to see the stars, but the landscape is lonely, and I would be afraid to come alone at night. 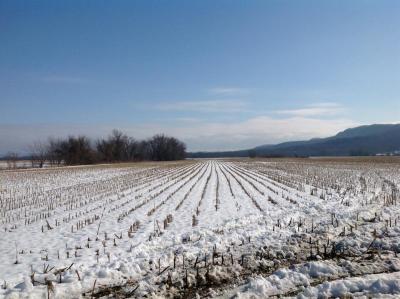 Just beyond the Connecticut, the Holyoke Range climbs abruptly. Standing on the riverbank, you can gaze over the wide, swiftly flowing dark water to see Summit House perched at the top of its steep rise. From Summit House, you can look down from the balcony and watch the teenagers on their ATVs barreling down the muddy tracks of the cornfields.

ATVs are a common sight here. Today, at the start of my walk, I encountered several small ones rattling by, manned by a couple of imps no older than eight. Their parents lounged beside their pickup trucks and talked and waited for their children. As I made my way along the dirt track into the lonelier fields, three larger ones roared up behind me. I resent when they do that. No matter how far I stroll, they always seem to find me out; and they unnerve me, they are so big and so inescapable, driving me down, their occupants bulked and masked under their helmets and thick coats. I paused on the icy track, waiting for the riders to choose a side, and then withdrew cautiously to the other one. But as they drove by, they peered through their visors to make eye contact with me, and raised their hands in greeting. So I greeted them in return, and felt less uneasy – even a little sheepish for my fears.

The prize of the walk, though, came as I was approaching the river. By its banks lies a smaller field, offset from the others and bare of corn stubble; in summer it probably bears potatoes or cucumbers.  As I walked past it, I heard another pair of ATVs charging up behind me.  “More?” I thought, grumpily.  Then I heard a rough bark, and then another.

I turned and, tearing across the field, at top speed, lanky and long-legged, tall and lean, came a full dog team harnessed to the front of an ATV. They raced toward me, beautiful, sleek, their faces in the most enormous of grins. Their tongues lolled a mile, flapping backwards from their parted jaws from the speed of their running. Their eyes bulged so wide the whites shone. A couple were huskies, but others represented a variety of dog types: all big and slim, a motley but muscular crew.

I stood aside to let them pass, marveling at a scene that seemed to belong to Alaska more than rural Massachusetts. Two adults rode the first ATV, one leaning over the handlebars, the other half-standing and holding the driver by the shoulders. They raised their hands to me in a high salute. Behind them, a smaller ATV held a couple of teenagers. I waved in delight.

After rounding the bend they paused, perhaps to let the dogs rest, because the team looked exhausted. But the dogs didn’t want to stop. For a moment they stood patiently. Then one or two let out impatient barks. They began to jump in their harnesses, to strain forward, to leap. So their people returned to the throttle, and off they raced:  around the field, down into the hollow at the far side and, returning on the opposite side, up a low rise, the dogs stretching and leaping to surmount the slope. Then they were gone, like hounds of the underworld vanishing into a barren landscape, only the very tops of their heads visible above the far hedges, and then at last not at all.

Naila Moreira is a lecturer and writing counselor at Smith College in Northampton, Massachusetts.