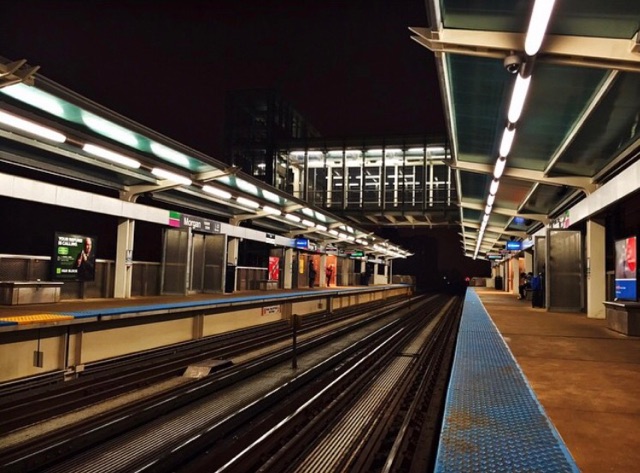 Tonight the boys swaying in the northbound train car

stitched into their puffy jackets—

I don’t get the reference, though I am old enough

to remember the winding ramps of old Chicago Stadium,

old enough for old logos to be cool again, for home

to be a place I visit, and names I once heard called

The passengers keep their heads down

as one boy hefts his weight until his chin trembles

just above the bar near the train’s dim ceiling,

and I root for him to hold on

as his friends count down the seconds

for the whole car to hear,

his feet just inches from the floor.

There’s that prayer that asks

who will die before his time

and how many will be created; who will rest

and who will wander, who will enjoy tranquility

in the coming year, and who will suffer.

I have lived in three cities

and Chicago, you are still

gold and sleepless. I will come back home

until there are no faces left

for me to recognize—and then

for the tunnels, the stone stadium ramps

that I remember, and the passing stations

whose names I know.

Grady Chambers was born and raised in Chicago. Poems of his have appeared in or are forthcoming from The Adroit Journal, Ninth Letter, Diode Poetry Journal, Barrow Street, Midwestern Gothic, and elsewhere. He lives in Oakland, and is a 2015-2017 Stegner Fellow at Stanford.