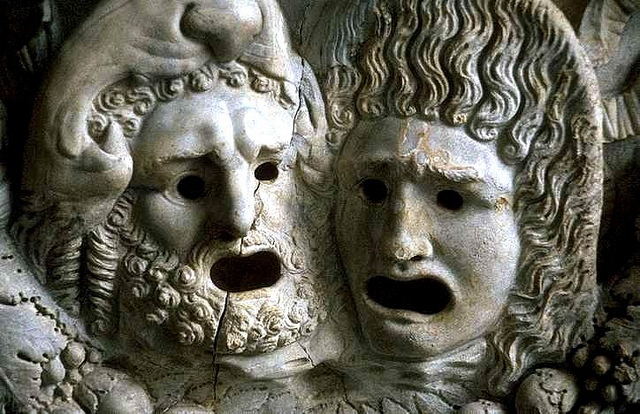 Tiresias, in all matters sacred you are ever-present
as the eunuch in rites of fertility
virile only in speech
you cut a waifish glance
at the cameras
escorted before the Assembly
to receive due punishment

the andron shuts in
its flash of medals

Tiresias, the scrolls in the library
cannot be burned
by the invading Goths
like papyri endlessly scrolling down and up
invisible          electric

Codex suggests an end (a teleology?)
but here we are        you say
in the age of immortal beauty

Sandeep Parmar’s second collection of poetry, Eidolon, is forthcoming from Shearsman Books in 2015.

But my wife’s fear of dancing
bumps the turntable.

her freshly Botoxed face.”
In one sparkly, pink

headphone bud out the other.
With my thumb, I trace a key

on her butt, can only curl
her hair while striking a pose

in the flamingo stance—the irony,
transparent like a silver wax LP.

The other day as I was searching for a book
To lend a friend who was reading once again
The plays of Aeschylus and Sophocles, I found
A tattered copy of “Reading Greek Tragedy”
By Cambridge Professor Simon Goldhill.
And as I was reminiscing through the text,
A letter I had written twenty years ago
Fell out between the pages into my hands,
A letter I had written to my puzzled parents
After spending a shortened week with them
At their condominium in Florida.
The Letter refers to “the whole wonderful mob,”
Which indicates my sister and my brother,
Were there together with their families.
I had always been a mystery to them all,
Tall, good-looking, erudite, and yet
Incapable of finding a foothold in the world.
And as I re-read the words of this old letter,
The mood of my visit revealed itself to me.
I must have been a “pill” the whole time,
As my acerbic mother would insist,
Enough so that I felt it necessary
To make some kind of half-hearted amends.
I was in year one of graduate school
In Classics, reading Ancient Greek,
And Latin history and philosophy,
All day, making sure that I was done by ten,
So that I could go to my bar, the Marlin,
To drink and smoke the night away with friends.
Each morning, I would dutifully start my day
By teaching first year students Greek at nine,
So I honestly couldn’t comprehend
Why on earth my advisor might feel the need
To warn me that certain department heads
Had some concerns about my drinking.
My mom and I hadn’t fought about that, thank god;
Instead I had been giving her a hard time
About the decision she had made to shun
My absent older brother and defend
His former wife and his “disputed” child,
His daughter, whom my brother disavowed,
Reserving her attention for a girl
She hardly knew, her granddaughter,
At the expense of her troubled oldest son.
The letter didn’t spell out any arguments,
And stopped just short of an apology,
But asked my mom to put aside her fear
“It takes my judgment much more seriously
Than I take either it or me,” it said,
And reminded her of our consanguinity,
And that independence was a quality,
Together with dispassion and panache,
Nurtured in me by them and only them.
The whole epistle sounded a bit odd.
It didn’t fit my recollection of that time,
And didn’t fit the image of myself
Which I had since remorsefully preserved:
Someone arrogant, defensive, and partially deranged
By alcohol.  Instead, there was a studied grace,
A balance and maturity of thought
Of which I never gave myself the credit,
And only after reading it the second time
Could I hear the Cicero and Seneca in it,
As if the letter had been engendered
And ennobled by a kind of ventriloquism
As if the words of Socrates and the stately prose
Of Roman authors had endowed my mind
For a time with a wisdom alien to me,
The only thing not seeming strange
Was that I never sent it.

Keith Dunlap’s poems have recently appeared or been accepted for publication in Borderlands: Texas Poetry Review, The Brooklyn Review, The Caroline Quarterly, The Georgetown Review, and elsewhere.

Even if you slowly scrutinize Audubon’s
Plate 4 (1827), it’s hard to see
the rattler preparing insidiously to appropriate
the eggs of Northern Mockingbirds and
presently the mockingbirds themselves.
A trumpet vine obscures the threat.