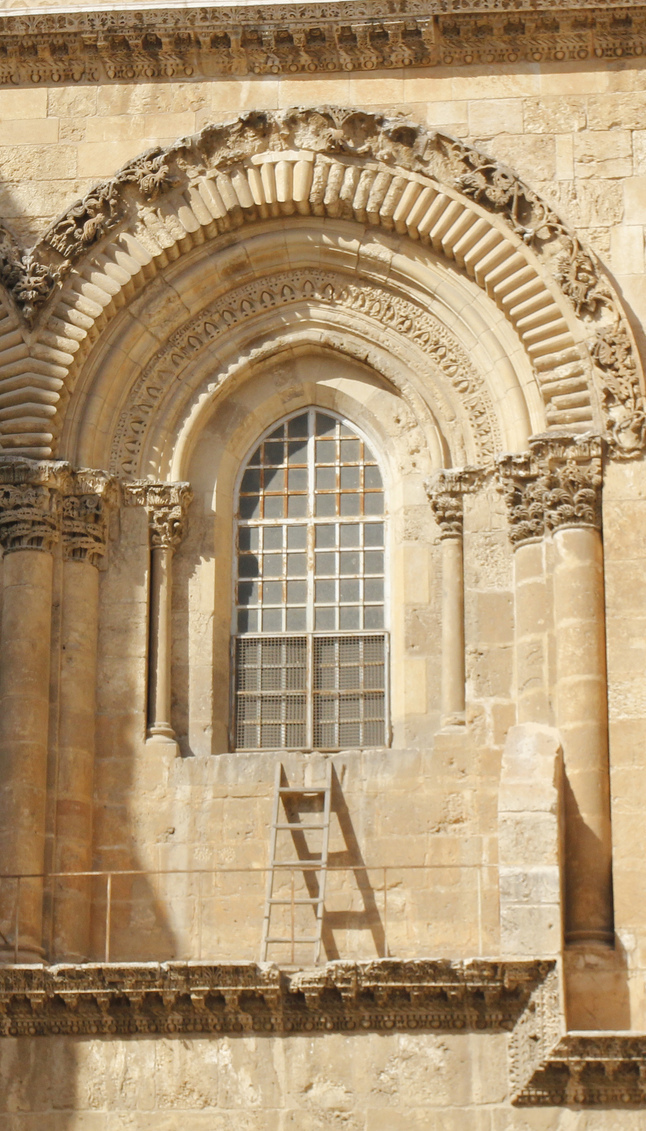 The story of the Immovable Ladder is this: it was left on a balcony of the Church of the Holy Sepulcher in Jerusalem by a careless mason in 1750 and has sat there ever since. The six orders of monks, in whose ruthless stewardship the church is kept, have divided the church into blocks of turf, which they guard with fervor, and sometimes with fists.  It’s unclear to which sect the balcony (and by extension, the ladder) belongs. Any attempt to answer that question would be a threat to the delicate status quo that keeps the monkish violence at bay. And so the ladder sits. Undisturbed.

The reality of the Immovable Ladder is this: like so many things, what was once an honest curiosity became with the years a self-consciously maintained quirk.  The ladder is not immovable. It has been moved, several times, though it is not polite to say so. It was even stolen, and then returned as though it was a piece of art.

At the corner of Salame St. and Har Zion St. in Tel Aviv, atop the roof of a small store, is another small, wooden ladder.  It isn’t visible from the street. I spied it from the window of a bus.

Seeing it, I thought of the Immovable Ladder, for this ladder too had a look of dreaminess and obstinacy about it.  When I got home Google Street View confirmed for me that it has been there for at least three years.

One is remembered, the other forgotten.  One is an imitation, the other genuine. One has been preserved, and the other simply remains.

It wasn’t until later that a third ladder came to my mind, this being the ladder that Jacob saw in his dream, with angels climbing up and down it.

And then I climbed another rung in this progression of thought and remembered the ladder I built with my father in the basement as a child, because I had a wayward obsession with the idea of having a simple wooden ladder like the one in my favorite TV show, which the characters were always using to climb in and out of each other’s bedroom windows.

I wanted that ladder, and the promises of an idealized fictive childhood it entailed.  The metal ladder in our garage made no such promises. It belonged to reality and looked nothing like the ladders one saw in TV shows or in cartoons or in one’s dreams.

Once we finished building my ladder, I leaned it against a tree and admired it.  There wasn’t much else to do with it. It wasn’t tall enough to get into a friend’s bedroom window – and besides, things like that only happened on TV.

And so I left it there against the tree – where it stayed for years.  It fell prey to lichen and rot but continued to stand. Eventually I stopped noticing it, and then we moved out of that house.

I can think of nothing so simple and practical as a ladder, and yet I cannot think of a single ladder in my life that is not locked in a dichotomous relationship with some other, imagined dream ladder.

All ladders, then, are like Jacob’s ladder – transports to an Other Place on the high end, rooted in dirt on the low.

This is true even of the simple, honest ladder on the storefront roof at Salame-Har Zion, though it was innocent of such nonsense until the day I passed by on a bus, staring out a window, and took notice.

Matthew Schultz is an American-Israeli author living in Tel Aviv. His book of essays, What Came Before, is forthcoming with Tupelo Press. Matthew’s work has also appeared in Best American Nonrequired Reading, Ecotone Magazine, and elsewhere. Follow him on Instagram @matthew_a_schultz.