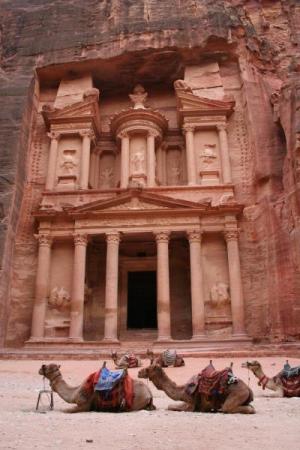 Two hundred years and one month ago, Swiss adventurer-scholar Johann Ludwig Burckhardt rediscovered the ancient Nabatean city of Petra, forgotten about by Westerners since the Crusades. Described in an 1845 poem by Brit John William Burgon as the “rose-red city half as old as time,” Petra was a gloriously wealthy city with an ingenious water system whose 1,000-year history and acres of archeological treasures are being excavated by a crack team at Brown University. A profile of the city in Smithsonian magazine convinces that Petra deserves its place as one of the New Seven Wonders of the World, alongside Machu Picchu and the Great Wall of China.

Burckhardt, charged with finding the source of the Niger River by the African Association, set off in 1809 and traveled through Syria, Palestine, and Arabia for three years before detouring to Petra in August of 1812, where he determined to locate the rumored ruins of an awesome treasury. As cover, he wore Arabic dress, spoke the language, and declared the purpose of his journey the sacrifice of a goat at the Jebel Haroun, traditionally known as the tomb of the prophet Aaron, brother of Moses.

After Burckhardt died of food poisoning in Cairo in 1817, his papers were donated to Cambridge University, who recently spotlighted this collection. In his published travel diary, Travels in Syria and the Holy Land, Burckhardt writes of Petra:

I was without protection in the midst of a desert where no traveller has ever before been seen; and a close examination … would have exited suspicions that I was a magician in search of treasures.

Most widely glorified as the holding place of The Holy Grail in Indiana Jones and the Last Crusade, Al Khazneh, or the Treasury, of Petra, is still gorgeously preserved and visited in high numbers, as evidenced by this YouTube video of cute cats in the old city and this slicker Japanese video of a walk past the strikingly carved buildings and through narrow streets just wide enough for a camel.

Welcome to the new Downtown of Amman.

Behind the giant colorful billboards that fence the area with illusions of the future, there is nothing but dust, cranes, holes and workers shipped in from faraway countries, their sweat rung out of them without consequence.

Bustani and his translator Thoraya El-Reyyes talk about rendering the story from Arabic into English in a lively exchange with ArabLit founder M. Lynx Qualey. About Bustani’s straightforward literary style, El-Reyyes says:

I was lucky with Hisham’s work because he doesn’t use the flowery prose that so many Arabic writers use. This flowery prose may read well to an Arabic reader, but it is difficult to translate this style into English without it sounding cheesy.  Actually, I think the whole concept of “cheesiness” doesn’t really exist in Arab culture — it is practically impossible to even translate the word cheesy. 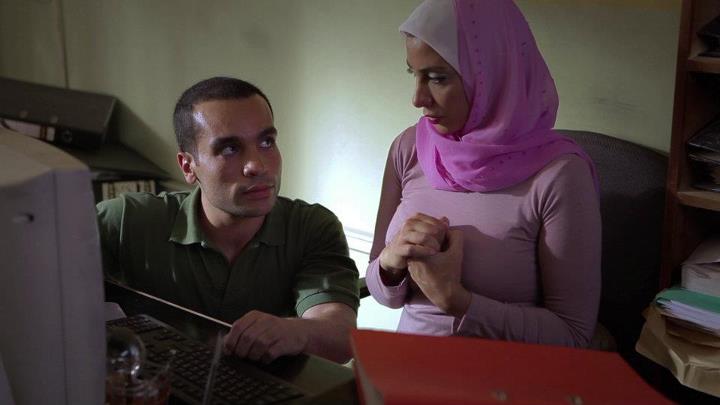 Marking a big jump forward in the Jordanian film industry this summer is the new release When Monaliza Smiled (Lamma Dehket Monaliza), a romantic comedy about a young single Jordanian woman seeking to escape suffocating expectations by securing an office job, where she falls in love with a low-status Egyptian coworker. Directed by Fadi Haddad and produced by Nadia Eliewat, the movie weaves in moments from classic black and white Egyptian films. Shot in four weeks with just $170,000, most of which came from the Royal Film Commission of Jordan, the film’s depictions of Amman are vibrantly sensory. In a review for Jordanian website 7iber.com (the name comes from the Arabic word for “ink”; the numeral 7 represents the word’s first letter “haa”), Naseem Tarawnah writes:

We get to see characters climbing the spiraling steps that line the hills of the Capital, women dodging glances of neighbors, the tiny eateries tucked away mid-stairway, and the abandoned old cinemas of Amman. At one point, Monaliza and Hamdi take a bus ride through west Amman, starring wide-eyed at the neon lights of cafes filled with the affluent; a stark contrast to their more immediate surroundings.

In less auspicious recent news, Jordan’s King Abdullah last week put his royal seal on an amendment to the country’s press and publications law that requires websites to register and obtain a license and makes website owners responsible for readers’ comments, according to Global Voices Online. In protest, many websites went black on August 29, and some protestors carried a mock coffin through the streets of Amman on September 12.

From Petra to Amman to cyberspace, Jordan reveals, writes, films, reads, watches, listens, and walks the streets in protest and for pleasure.

Jennifer Acker is the Editor of The Common and is a Faculty Fellow at NYU Abu Dhabi in 2012-13.