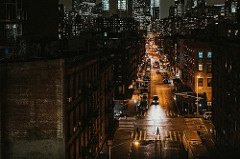 No mystery if the cats gather as this strange encounter
should have come to have emblematized the city:
for of all those who passed and paid homage to their peer
only you remained, after the room was clear.
The way is unsteady, past the museum of thoughts
that jostle the aftergoers after midnight,
but the way home straight: one shot of hammering train,
then silence. You enter the unexpectedly grand
unflowering existence, emptying your hand,
and admiring the disorderly filaments,
exacerbated desires the morning must put away.
But now: the full confession to the stranger.
The night drives like a rocket to its danger,
apart from the world, and with nothing to regret.

At Karnak the boy king was buried alive.
The burial party silenced. Three thousand years passed.
At the last moment of the concession to dig
the sixteen steps were discovered. The unbroken seals.
The mummy walked. Who saw it went insane.
The Lord patron died of a mosquito bite.
Ten years passed. The annual expedition
of British complained about the Cairo museum.
A stranger was found there at night, by the scrolls of Amen-Ra.
A beautiful aristocratic Egyptian woman
sleepwalked out of an international cocktail party,
was found unconscious on the steps of the Museum.
A guard was dead, and the old ageless guide
requested once again to be let inside.

Manhattan in the rain. I couldn’t speak
when Uncle Sid drove me in from Rockaway.
What did I want? To visit the punk rock shops.
The statue of liberty seemed oxidized and locked,
too fleeting, like shops I only saw when they were closed,
left for another lifetime. What would we have said if we talked?
Head of the Vice Squad. My mind was exploding with vice.
When I came back from England I was lost,
and sat in my Aunt’s house in Far Rockaway
watching Abbott and Costello night and day,
as vacuum cleaner salesmen, rival clans,
detectives, photographers, victims of circumstance.
I pilfered the attic for Pogo and Mark Twain,
ate seven kinds of cereal (she had three sons),
and saw Mrs. Wiggs and the Cabbage Patch again.

Ben Mazer is the author of two new poetry collections: Poems and January 2008.