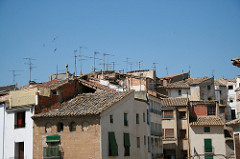 June’s consuming,
stripping down darkness
to its thinnest hours,
swallowing sleep. Not
the fireflies, not the moon,
not the deer stripping
apple trees, not the cemetery
stones beyond them, are as ravenous
for my wakefulness.

First light and the Harvard landscaper
comes to plan dawn memories
for this place—“a past
you’d have planted had you lived
here last century.” So,
apple rows, lone maple
in the field, low stonewalls
along the meadow’s fringe…
and were it possible, the whole
site tinted in daguerreotype…

By noon, the brass
knocker, brilliant sunlight, and Waldo,
the town’s oldest drunk and
bricklayer, whose chimneys are guaranteed,
he says, to outlast him. A hundred years
ago, says Waldo, your land was town
center, those crossroads outside your door
the hub, Ben Ober and Cemetery roads.
Ben Ober, the most feared logger
in the county, but his industry
kept the townsmen alive until they died,
and went down the other road to the plot
cemetery, just there beyond your apples.

Ayup, too many bugs down by the river,
so folks moved higher up where the breezes
kept them only half crazy from black flies.
And right there on the corner stood a general
store, a tall farmhouse nextdoor, two barns,
three outbuildings. And that farmhouse stood
until the Second World War called those farmboys away
and returned them so lazy we bore them
straight to the cemetery over there,
the honored dead of Johnson, Vermont.

By ten o’clock twilight, Waldo
fits the last brick, picks up
his pay, snorts at the Ivy Leaguer’s
plans, and scrams, shouting back,
“The winds are so big here
the last house lasted only thirty
years. But my chimney’s
still standing. Anyway,
thanks for the drinkin’ money!”

So, this land’s been spoken
for. And Waldo’s knock was louder
than any surviving chimney—
the kind that usually says
a home, tumbled or burned, once stood here—
that knock opened the past, welcomed
the ghosts, and made it too late
for dreaming “mown corridors” through highgrass
and “pasture rooms” where a picnicking family
with a thatched basket of bleu cheese and Chablis
might spread its blanket and make its ample table.

No, June says join the night
thinning between one day and another,
join the stories older than yours,
in which the nightdeer coring the apples
and stripping the trees come forward as
excoriating ghosts whose harsh breaths
say Shame! or Live! when the wind comes up,
and blow what’s left of the plot cemetery’s
breath into these fields—and the deer go on
grinding their jaws, and the full moon
goes on behind clouds, and the night sky
is both overcast and bright enough
to see ghosts by but not bright enough to see
beyond them toward the land’s future shape.

Neil Shepard has two recent books: a full book of poems, (T)ravel/Un(t)ravel, and an offbeat chapbook, Vermont Exit Ramps. His new book, Hominid Up, is due in 2014 from Salmon Poetry Press (Ireland).