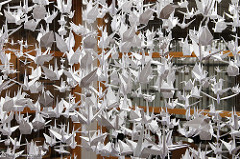 The Cat’s Eye Nebula—one could begin
there as a way of showing how being
folds in upon itself, always to form
new configurations. That’s where we’re from,
the vast compounded into the covert
as if all were the sum of a hidden vector;
and why I ply my art without a staple,
shaping each shear assemblage of plates
into what I wish, these bursting petals
out of a glue-less flatland that I wrap
to sculpt into their own particular warp
in space and time. With me, all reduces
to a page of elementals, rescued
into some new panoply, secured
for the time being in situ—my own seducer,
enwound by the delicacy of my desire,
the artifice in which I would reside,
and do. If they remain merely these brief
renderings, they keep nonetheless the fiber
of things passing, like late afternoon pools
after showers that disappear in loops
of process, lithe, un-regarded spools
that only seem intricate cuts, heart-
less, the inevitable goings of the earth.
With every misstep, with every fraught lapse,
one seeks a new ordering, sudden leaps
of the unforeseen that answer pleas,
or appear to, a twist before which failure pales.
I venture the fold, the pleat, the scar,
the code by which geometries of arcs
come clear to the mind, with every edit
harboring evidence of a new tide,
the saint behind the stain, or at the fringe
a center plain to the patient finger—
the weather’s wreathe of incipient snow
in which spring’s last, early layers are sown;
which is not to say in the hour of the wolf
there is no bitterness in the flow,
or the looking back brokenly at the last,
resolving then into a pillar of salt,
the fleeting prospect that was Lot’s
true inheritance, his marriage to the lost.
To make these creased tessellations rife ores
out of which fish swim blindingly from roes
and all of that flaming to a rose—
is to conjure skin that skeins without a sore
as seconds famish, flourish to an era.
What I want to say, is that all we are
at core is something like an attending ear
and the world an infinitely facile veil,
the migrant medium of where we live.
Think of an expanse of winter field,
its impression that, in time, nothing’s filed,
that all that was there quietly rinses
away into the whiteness, like resins
glazing in sunlight. A song of sirens
could not be more vagrant, its dis-ease
harrows and lures us as, at the seaside,
one hears a hush from the deepest shelf
that calls to every increment of flesh.
It is the lone presence of the sensual
through which the spirit sings and unseals,
like those paper butterflies a king saw
in his dream, saw they were what he was.
Hardest hatreds, scattered threads, trash, despair—
I fold, and sink, and sound, until it’s praised.

Daniel Tobin is the author of seven books of poems, Where the World is Made, Double Life, The Narrows, Second Things, Belated Heavens (winner of the Massachusetts Book Award in Poetry, 2011), The Net (forthcoming, Four Way Books, 2014), and From Nothing (forthcoming, Four Way Books, 2016), along with the critical studies and Passage to the Center: Imagination and the Sacred in the Poetry of Seamus Heaney and Awake in America. He is the editor of The Book of Irish American Poetry from the Eighteenth Century to the Present, The Selected Poems and Lola Ridge, and Poet’s Work, Poet’s Play: Essays on the Practice and the Art.  His awards include the “The Discovery/The Nation Award,” The Robert Penn Warren Award, the Robert Frost Fellowship, the Katherine Bakeless Nason Prize, and creative writing fellowships from the National Endowment for the Arts and the John Simon Guggenheim Foundation.

Listen to Daniel Tobin and R. A. Villanueva discuss “The Origamist” on our Contributors in Conversation podcast.