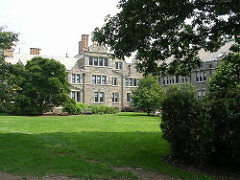 Not cool for September so we walked
slowly, slowly to cross the still-green campus
gold-struck in morning’s light.
That’s the kind of phrase I’d have used,
years ago, an undergrad arriving in town
the same year that you’d left. That morning, though,
no matter how it looked, the light
seemed less bright to me, still reeling
from an early call. You’d stayed up
half the night, couldn’t swallow; couldn’t
sleep. Paged, your doctor put in a quick prescription.
We’d pick it up and make it back in time
for class—classes really, that had been
blended to create more “student contact.”
They filed in, settled; then you spoke, offered
a reservation with the grace that
few give to apology: you hadn’t written much on the city—
(that year, our college’s Symposium theme)—
but believed in the importance of place,
of knowing and living with the past,
even when it’s invisible . . . the coffee
and pastry order I’d placed weeks before
hadn’t been filled. But you—not long from
a second round of chemo for a rare, aggressive
cancer, family fate, head silk-wrapped—
almost engulfed by the executive
room’s power desk and chair,
commanded our suburbanites’ attention
as you described the essay as a “slice of mind,”
face lit by standard-issue florescent track lights
that flickered on and off. You took questions,
same ones I’m sure you’d heard before,
pleased, and answered kindly
even though you knew then you didn’t
have the time. No lunch—you couldn’t eat. A long
day required rest. Later you’d read.
For backdrop, the room’s wall
of expansive windows revealed some
greatly contested soccer game below. Every
once in a while we’d catch crowd cheer,
the blast of a horn. It didn’t matter:
in that hour the silence of Levittown,
the home of your Pennsylvania childhood,
came alive with questions whose answers
it took a life’s time to find. My notes,
that day were sketchy: Witness
to—restorer of—a family’s complicated history,
the problem of new suburbs,
feeling lost and placeless . . . Deborah,
something struck a nerve. You’d never know
the lives of those you’d touched:
the bio major whose blue collar roots
were sketched out warmly with great care;
the ROTC girl whose memoir took
first prize for Humanities Research.
That late September night, there would be
no faculty dinner, just a few of us
gathering in The Spice Company’s
cocktail lounge. Conversation carried on:
you laughed along, sipped hot water
from a cooling cup. A colleagues’
bumbled “Please, come back and
visit soon” broke our party up.