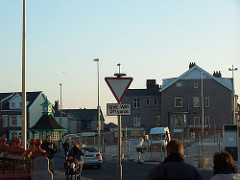 Not apocrypha, as in Scipio salting
the Carthaginian fields, a curse
on re-inhabitation; not the blacklisted
feature nor Jagger’s salute

to the working man, but that
which purifies, preserves, seals
a bargain, signifies wisdom, intelligence,
and virility—. Or secrets

salted away, as in the ambition
a friend says she quickly learned
to kiss goodbye given that whole days
pass in the absence of any civil

workplace exchange. Work
that’s meaningful, the new wisdom goes,
is work that’s done with the hands. And here
I know I’ll just have to defer, cross-cut

to conversations I overheard,
how they talked and sipped—mother,
aunt and uncle, looking back from
their vantage point on my backyard deck

to the hometown an ocean away,
looking back to the gilt light of after the war
of before the closure
where mates from the mill are afforded

a moment to take a break from the line.
Salt of the earth, give you the shirt
off their back, everyone someone
you knew to nod to. And if those

smiles stay stuck in the space
of a frame tacked over my desk
almost half a century after the photo’s taking,
am I to believe it’s nothing more

than a publicity pose? Who’s to say
camaraderie doesn’t come from double-shifts
under blackout conditions, that
forging steel tubes for the allied

under the ocean petrol pipe line
might account for some lingering
civic pride? The photograph does not

necessarily say what is no longer, but only
and for certain what has been. It reminds us
of its mythic heritage: group view
of the busted back, close-up of singed

coveralls—these are trims from the story.
With a simple click I can access the media
archive—exterior shot of the town
on a wet day, interview with the Labor MP

speaking on behalf of government agencies,
which cuts to a view of workers
who talk about the social consequences
of closure. And here, in this late luxury,

I’ll try to construct my own sottonarrativa,
a smaller current in the larger river; I’ll step out
of the shower, humming a little
Vie en rose or the Kinks’ Get back in Line. I’ll thank

my stars there’s no union man in sight
as I wander the aisles, considering
the virtues each—coarse, finishing, flake,
gray, grinder, sea, smoked, or Sicilian—in

search of the imported butter that makes
my shortbread especially toothsome,
and caramels fleur-de-sel.