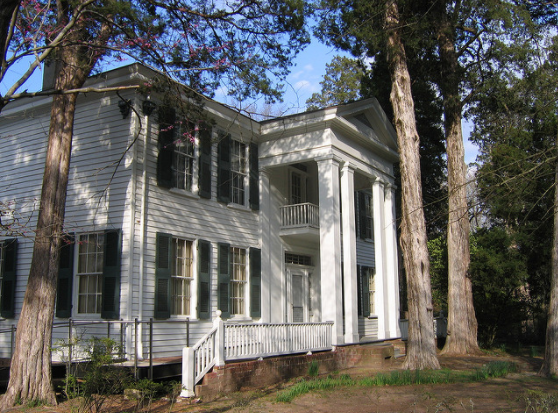 Today’s dispatch from Gregory Curtis was originally posted on The Mailer Fellowship Blog, which features essays from students and teachers at the Norman Mailer Center and Writers Colony in Provincetown, Massachusetts. Curtis is a mentor to the Colony’s non-fiction fellows.

I like visiting writers’ houses. You see the spaces that enveloped their imagination day by day. You see the furniture they sat in and the paintings and photographs on the walls. You see the dishes in the kitchen. You see the books on their shelves and the bed they slept in. It’s possible to assume too much from all this, but what’s the point of going at all if you don’t make some conclusions from what you see?

So, driving to the Mailer house in Provincetown from Austin I stopped along the way to see William Faulkner’s house in Oxford, Mississippi. I awoke early in Oxford the morning after the long day’s drive from Austin. Armed with the excellent pamphlet of walking tours from the Oxford Visitor’s Bureau, I parked my car near Faulkner’s house at 9am, an hour before the house would open, and set out to walk around the neighborhood. The sky was overcast and threatening, but I left my umbrella in my car anyway. Why? I walked about five blocks to the house where Faulkner lived as a boy. It was one story but shapeless and rambling in all directions. There was a huge, verdant lawn and thick trees and bushes and a car and yard tools here and there but no one around. Dense woods came right up to the back porch. A doe emerged from between two trees. She regarded me intently before turning calmly and disappearing into the woods.

Just a short walk away I found a large Greek revival mansion set way back from the road. The walk to the door was lined with immense trees that obscured the front of the house. Otherwise, the huge, grassy lot was empty. The house stood in splendid isolation. According to the visitors’ guide, this house may have been the inspiration for the house in “A Rose for Emily”. It certainly fit the description. I thought of her in the living room telling the delegation from city hall, “I pay no taxes in Jefferson.”

I felt a few drops of rain. Now the sky was almost black. I began walking back to my car, but the rain came harder and then harder still. Lightning flashed and thunder boomed from just a block or so away. I took shelter under a pine.

Just up the block I saw a carpenter’s van and a pickup with a load of lumber parked in a driveway. That house had a long front porch that curved around from the side to the front where three workmen had taken refuge. It appeared that they were renovating the empty house. “Can I come up there?” I shouted to them.

I ran to the porch without getting too wet. Two looked to be twenty-five or so. The third, at least twice their age, sat on one of the porch rails. He was slack, expressionless, silent. One of the younger two, with a chubby, round face and a stomach that pushed out a little over the belt of his jeans, looked me over, not in an unfriendly way, trying to place just what a stranger was doing there out walking along the street in the rain. “Are you visiting your children at the University?” he asked, nodding his head as if he were kindly offering me this way to account for myself.

I said that I had just stopped in town to see Faulkner’s house.

“They say that place is haunted,” the second young one said. He was average height but handsome and athletic with short, dark hair and a bit of stubble on his chin. “I don’t know myself. I’ve never been there, but that’s what they say.”

By now the rain had slackened just a bit. “Got to get my bird,” the dark-haired one said and dashed off the porch.

The chubby one was shaking his head. “If that…,” he said, but he didn’t finish his thought. In a few moments the dark-haired one returned at a run carrying a yellow shoebox which he set gently on the floor of the porch. Inside were some strips of torn newspaper and a tiny black-gray ball of down with a – relatively – immense beak open wide.

“It’s hungry again as usual,” he said. He dropped a few bits of bread into the chasm formed by the beak. Then the beak closed and disappeared somehow into the murky down. “I found it in the road,” he said to me.

“That is the ugliest thing,” the chubby one said. “You couldn’t pay me to touch that thing. He picked it right up.”

“You’re supposed to put them back in the nest,” the dark-haired one said, ignoring his partner’s comments. “I think I can find it. That’s not true that the mother leaves if you touch the nest. That is false information.”

A small, sporty car turned into the driveway. A stocky, teen-aged girl got out and ran up on the porch. Ignoring all of us, she went to a bench, which I hadn’t even noticed, around the curve of the porch where another young girl, whom I hadn’t noticed either, was lying. She was fleshy and curvy, barefoot, wearing shorts and a halter. Eula Varner! The two girls conspired in whispers and laughter. Then the stocky one ran back to her car and drove off, leaving Eula’s avatar – to use a Faulknerian word – lying on the bench as she had been all along.

Well, the rain stopped and that was about all of that. I thanked all four – in recognition, the impassive older man raised a single finger of his right hand, which was resting on the porch railing – and walked on thinking I’d learned a few things about Faulkner just by the proximity, even before I got to his house.

Gregory Curtis’s books are Disarmed: The Story of the Venus de Milo and The Cave Painters: Probing the Mysteries of the World’s First Artists.