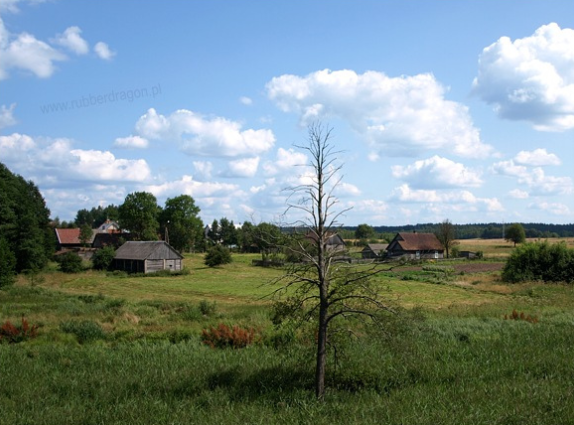 These parachutists were members of the cichociemni, “the Dark and Silent,” an elite troop of soldiers specially trained in London who trickled back into Poland as specialized reinforcements. They would land, slightly disoriented from their fall, and village men would whistle through the trees, flash their faces like woodland apparitions, and guide the soldiers further. It was not uncommon to find parachutists sleeping in the palace stables, creeping through the pear orchards, or hiding in the barns of villagers, before leaving to join the rest of the army in Warsaw’s sewers and secret meeting places.

In this same clearing, Nazis shot political prisoners to death. They executed members of the Home Army. They hid the bloody bodies of Polish Opposition Movement members in piles of leaves. And the soldiers waited in the bushes, holding their breath and watching the skies.

Now, it is difficult to imagine the park and its forest being anything but calm. Now it is summer and the days are long. I sit in the darkened library, on old green armchairs in front of a fireplace. Two walls are lined with fourteen wooden vitrines filled with centuries-old books, their parchment pages gray and thin with calligraphic prayers or explanations of taxonomy and geometric functions. A red leather sofa stands in the middle, wide as a bed. On one end of the room are two spectacular Italian globes, both white and black, one of the world as it looked in the 17th century, and one of the cosmos. On the other end, three tall windows open onto the park, a balcony.

And here I cannot relinquish the cooling evening sun that combs the thick green of the lindens and the birches, as their leaves form worlds accessible only to bees. The lindens are blooming, and even through the window I can smell that thick smell of summer, a too-sweet ambrosia, a humid honey. The avenue unfurls behind the palace unbroken, like an exercise in perspective, and ends in a gap in the perpendicular trees and hedges. Through the gap, a pale green field, and farther still, brushstrokes of cumulonimbus and a smudge of darker forest. The sky is the purple-blue of cornflowers. The stillness is broken by a bride running down the green swath of grass between the trees. One more photograph before the sun sets.

Iza Wojciechowska is currently at work on a book about aristocracy, family, art, and war and the Polish palace of Nieborów.