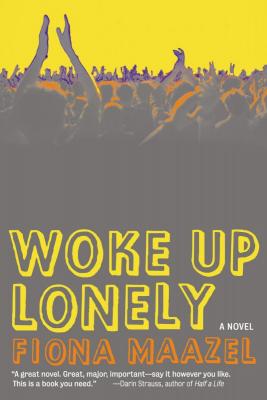 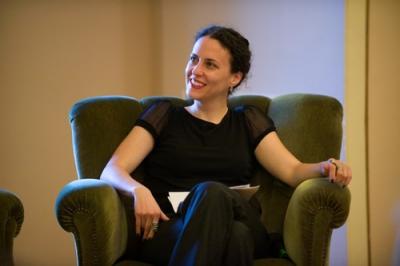 Fiona Maazel is the author of the novels Last Last Chance and Woke Up Lonely, the latter of which was recently published by Graywolf Press. She is the winner of the Bard Prize for Fiction and a National Book Foundation “5 Under 35” Honoree. She teaches at Brooklyn College, Columbia University, New York University, Princeton University, and was the Picador Guest Professor at the University of Leipzig, Germany. Nelson first met Maazel, briefly, during a book launch party at Powerhouse Arena in Brooklyn, New York. They traded a few emails and agreed to conduct their interview online, over Gchat.

S. Tremaine Nelson (SN): Haha. Excellent start. So let’s contextualize this “space.” I’m writing from a PR firm in the Meatpacking District. Where are you writing from?

FM: My apartment in Brooklyn.

SN: Do you have any books in sight or within reach?

FM: I have plenty!

SN: Are you at your writing desk?

FM: My desk, above which: bookshelves.

FM: Window to my right, but I face the books.

SN: Let’s talk about some of your favorite books? First book that made you laugh out loud, perhaps?

FM: Hmm. When I was in high school, I thought Jane Austen was pretty hilarious. Droll, wry, etc. Though I would not call her a fave, per se. Right now I’m rereading I Love Dick, to teach to my grad students at Columbia. That is a favorite. James Thurber always makes me laugh. If we’re talking contemporary writers, well, that George Saunders is pretty hilarious.

SN: Saunders is hilarious. How about Sam Lipsyte?

SN: Did you see George Saunders on Colbert?

SN: Amazing that our popular culture would actually grant a short-story writer a spot where millions upon millions of viewers are exposed to such an excellent form.

FM: It’s unheard of. But not unprecedented. I was just telling someone the other day about how after Van Cliburn won the Tchaikovsky competition in Moscow, they gave him a ticker tape parade. This was in 1958 or ’59 or something. Can you imagine? A ticker tape parade for a pianist? Can you imagine that happening today? We don’t celebrate our artists the way we used to, so it was amazing to see George on Colbert.

SN: Reminds me of the story about Stravinsky paying two guys to get into a fight during his show hoping for the publicity the next day in the papers. I’m not sure if [staging a fist fight] would work today.

SN: It would be fun to give it a try, at least. Crowd everyone into Book Court in Brooklyn, pay two meatheads to stand up and do something outrageous.

FM: And then set one of us on fire.

SN: This is something Esme, from Woke Up Lonely, would be able to pull off.

FM: In disguise, of course.

SN: In the fat suit!

FM: I love the fat suit. In earlier drafts, the fat suit stuff got a lot more attention. I spent HOURS reading up on how to apply prosthetic appliances and devoted a few pages to that material, all of which got cut.

SN: Should we talk about Woke Up Lonely for a bit?

SN: Okay, so North Korea. An unlikely, but extremely fruitful source of comedy. And a major character, the cult leader named Thurlow Dan, has connections with North Korea. Can you elaborate on how you became interested in writing about a slowly unraveling cult figure?

FM: Thurlow wants to make a difference in North Korea. To impose his advocacy of solutions to loneliness on the North Koreans by way of thawing relations between us and them. It’s a loony idea, but it’s his. I came to the idea of wanting to write about someone like him first by being interested in loneliness and a community of loners, and then in how this community would go about forging such strong ties; it would immediately veer towards cultism. Soon enough, I began to think about its figurehead and what he might be like and how anyone actually becomes a cult leader. If you are spearheading a movement whose mandate is to accost loneliness in the 21st century, chances are high that you are a deeply unhappy and lonely man, yourself.

SN: Right, manifested in the chat rooms where Helix members go for sex, companionship, seeking to transcend the loneliness.

FM: Right. I started with that and moved on from there. The speed dating, the communes. The Helix is something slightly different to everyone, which is part of its undoing.

SN: Would you say you identify with any of the characters the most?

FM: I identify with them all!

FM: Probably least with Esme. Strongly with Thurlow and Anne-Janet, Ned and sure, Olgo. Olgo is an egotist. He can’t see past himself. He shuns introspection. I get all that.

SN: What elements of the book are you most excited for your readers to experience?

FM: Probably the four short stories that close out the novel plus the coda. I think that’s the best work I’ve ever done. So much of revising this novel was trying to figure out how to get readers to that point.

SN: Were there literary precedents in mind when you started plotting out Woke Up Lonely?

FM: In terms of the nuts and bolts, I had no other books in mind. In general, I never do. But I did end the novel having the closing scene of Tess of the D’Urbervilles in mind (the scenes are strikingly similar) and a bit of Dr. Zhivago in mind for how the novel opens. But mostly, when I’m working, I live in my own hermetic universe. Nothing much else exists for me. Not my colleagues’ work or my forbearers’.

SN: Do you find yourself more drawn to writing short stories or novels?

FM: Oh, novels for sure.

SN: Is this because you read novels more?

FM: No. It’s because I like to take the long view. I like the slow burn of a novel, although I love short fiction and read a lot of it. And I think it’s harder to write. Much harder.

SN: No room for errors in short fiction.

FM: There’s no room for errors in a novel, either. I am absolutely opposed to this notion that you can get away with stuff in a novel. You can’t. Or you shouldn’t. But short fiction requires discipline and compression – neither of which is a strong suit for me.

SN: To create the full picture of Fiona, the artist, can you talk about your preferences in other media, music, film, art? For instance, do you like country music?

FM: Yes, I listen to real country music often – Patsy Cline, Steve Earle, Johnny Cash – but can’t stand that modern Nashville stuff. Country music and loneliness go hand in hand. Man on a hill with nothing but his gun to keep him warm, that kind of thing. In terms of other types of media, I just saw The Artist Is Present, about Marina Abramovic, which blew me away.

SN: Back to books. If you were trapped on a desert island, and you could only take one book with you?

FM: Hah. I just played this game with Ben Marcus. He said he’d take How to Build a Boat, which made me laugh for ten minutes. I’d take the Bible. Or the Collected Shakespeare.

SN: How about: favorite indie bookstore?

FM: Hmm. That’s hard because there are some really good ones around where I live. Word, Greenlight, Community [in Brooklyn]. Probably, though, I’d say Shakespeare & Co in Paris, which I just went to for the first time last summer. I thought it was amazing. The best of the best was, of course, Dutton’s, in L.A. in Brentwood. They had everything. The layout was incredible. Such a terrible loss when it shut down.

SN: Where are you most excited to read on your coming book tour?

FM: You know, I am psyched about every city I’m going to. Never been to Portland, Seattle, Minneapolis, or Milwaukee, so I’m most excited to go to those cities. But I love San Francisco and L.A., Boston, etc. Because I wrote a novel, I get to go to these places. How great is that?

SN: What writer, if you were to meet them today, would make you feel star struck?

Fiona Maazel’s short story “Interpreters of Men Get It On” appears in Issue No. 01 of The Common.