I hadn’t come to Mongolia seeking an education in the politics of development, but the signs of rapid, double-edged growth were everywhere. In Bayan-Olgii, the westernmost city, a huge entourage of Western foreigners driving foreign vehicles tore into the yurt camp where I stayed one night. They shook the felt walls of the camp with their shouting and drinking and ramen noodle-making, and the next morning did burn outs in the gravel driveway and honked as they left, showering pebbles over the camp owners’ barelegged children.

Around the town of Bayan-Ollgi sat multitudes of great, hulking tourist vehicles, resting at roadsides like over-fed weight lifters. They were protected by new, fat tires, for the sand, and strapped to their roofs and sides were shiny water and petrol cans, spare tires, tool kits, maps and jacks – all the accouterments of a military reconnaissance mission. I had the strong impression of being in an invaded country, watching a civilian-clothed army loot stores for bread and toilet paper. 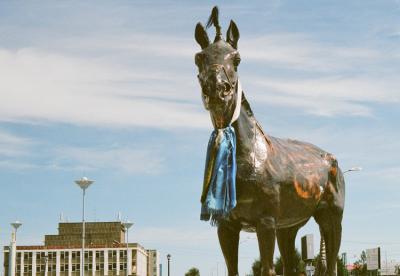 Until recently, Mongolia was a notoriously difficult travel destination, attracting mainly adventure and spiritual tourists, like the writer/psychologist couple from Texas who travelled to Mongolia with their autistic son, hoping that Shamans might ‘treat’ his autism. (The couple has since developed the “Horse Boy Method,” a way of healing autistic-spectrum children by riding them around on ponies.) But today, with Mongolia’s economic boom increasing foreign investment and foreign interest in the country, it seems that anyone with a large pack of Imodium and enough of the megabucks required to pay for a jeep, a driver and a guide, can find their way around.

After a few days in the country, it didn’t come as a surprise to me that many of the locals I met resented tourists. “Many visitors,” said one young woman I talked to on a shared sixty-hour bus ordeal across the country, “don’t try to stop and talk to us.” She had a proud chin; she was the daughter of a mayor. “And if we don’t speak English, we can’t talk to them anyway.” Fortunately for Russian-speaking me, most of Mongolia’s older folk, including the man who sold the bus tickets, still spoke the language of their Soviet former colonizers. This young woman was a Kazakh-Mongol and had learned Russian growing up on the Kazakh side of the border. Mongolia was now fiercely her home, and it seemed she wanted to defend it.

The reason for locals’ unfriendliness toward foreigners is currently the subject of a lot of debate among Mongolians themselves. This recent article on The Mongolist lays the blame at the hands of populist politicians, who have allegedly incited hatred of foreigners by portraying them as thieves “here to steal mining resources.” The nascent mining and tourism industries are inextricably linked in the new Mongolia, as the country gallops toward increased economic growth. The conduct of foreigners, mainly white Westerners, plays an undeniably huge role in the outcomes of both industries.

Many people in Mongolia live on about two dollars a day. The country also has the world’s fastest growing economy (with a 17% growth rate in 2011, 18% in 2013). So it’s an understatement to say this is a land of contrasts and extremes, where adults live in holes under the city of Ulaan Baator to stay alive in winter, as this photo essay documents, and a new class of educated young professionals moves into high-rise apartments in the capital city, as the first of the images in this NPR report show. 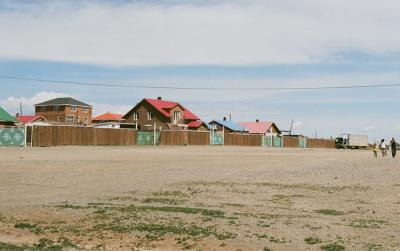 The tourism industry is growing quickly, but the current economic boom in Mongolia is really due to the country’s rapidly developing mining industry, which is beginning to exploit copper, coal, and gold deposits in the southern Gobi desert. The mines are all operated by large foreign companies, particularly American (Haliburton) and British-Australian (Rio Tinto) ones. The Oyu Tolgoi (or ‘turquoise hill’) mine is transforming Mongolia’s landscape, according to this New York Times video, which gauges local reactions to the heavy resource use of the mine and the way it is creating a cloud of dust over much of the southern Gobi. The changes are happening right now. The photos in “Though not yet Open, a Huge Mine is Transforming Mongolia’s Landscape” were taken a month after I travelled through the region last summer.

Locals, foreigners, and government officials all have different ideas about who will benefit from the booms in mining and tourism. As this NPR story reports, the mineral boom in Mongolia is expected to “more than double” the country’s GDP over the next decade. The extraction companies and government, using the expected ‘trickle down’ rhetoric, predict widespread poverty alleviation and increased living standards for Mongolians. The nomadic herders of the Gobi say it is harder to find water for their animals these days. They’ve also noticed increased respiratory illnesses, and they’re concerned that local workers are being coerced into contracts with the mining companies. The Oyu Tolgoi mine pays workers on average US$230 per month, while its forecast profit for the first year of operating is US$900 million.

Over a third of Mongolian people follow a traditional way of life. Forty percent of the country’s households make their living as animal herders. This nomadic lifestyle requires large amounts of healthy land to roam across. A sustainable relationship with the earth is central to the population’s way of life. 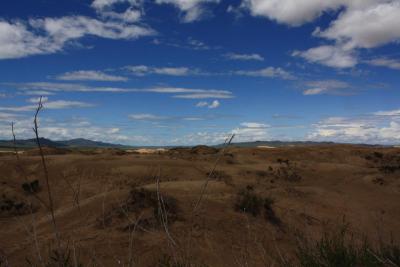 “I love my Mongolia,” said the young, proud woman on the bus ride. She offered me strips of cured horsemeat while she talked — astonishingly tasty meat her Kazakh grandmother had prepared at home. “Look at the beautiful grasslands around us,” she said, as we chugged along on the sandy gravel and chewed mouthfuls of horse. “Look at the sky. It’s so quiet. So glorious. So healthy.” Out of the window the sky really was a vision of glory: huge, wide-open, and tinted with the gentlest aquamarines and purples. There were no people visible, and only one or two white yurts. We passed by the occasional, trotting yak. Sometimes the yaks, and the camels, tried to race the bus but it wasn’t a fair race, we had too much momentum. They eventually fell behind, panting.

Photographs by Melody Nixon (excluding image of the steppe, from Creative Commons)