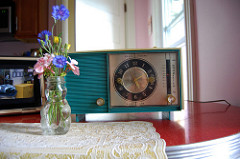 How can the one-man band disband?
They say scads of folks cried at his

Scattering. Rosa, his wife applied
The first kindle to the tinder, but

A nervous firefighter intervened
And doused his ashes-to-ashes machine

With seltzer, unsealing his fate.
Now, he slides across their ceiling like

A glum child tiptoeing a frozen lake,
Wondering what he might be to fall

Through the ether empty as a note.
They say he’s an aureate bode. Now,

She tends to her beefsteaks by moonlight,
Hoping to avoid his lowing cloud.

They say her vines sway like cobras, charmed
By her hips, that samba; her bare toes

Tune the dirt. At dusk, Rosa calls it
A night and walks inside and buries

A radio under her pillow
To catch the late scores from the coast.

Peter Jay Shippy is the author of Thieves’ Latin, Alphaville, and How to Build the Ghost in Your Attic.