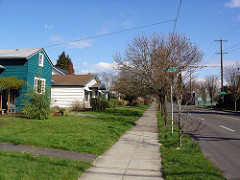 You can tell by the improved hand writing and spelling on the last two entries that Dan McGuire is on the mend. World War II was probably a break in the action for this brawler, the rare Irishman who’s nicer drunk than sober. On the left side of his nose the dome of the lower lateral cartilage has been bitten off.

I met Dan three months before when he visited the ENT clinic for help with a bloody nose. On his second visit a month ago he tried to hit me up for some Viagra and said it wasn’t absolutely certain the pharmacy would notice the prescription was coming from the ENT terminal (by regulation only a psychiatrist, neurologist, or urologist may conjure up a boner for a needy 80- year-old). I told him they didn’t have pediatric doses anyway, and he offered one-tenth of a smile, which for Dan was a lot.

He gets ahead of me down the hall, and before I even get to the office door he’s into it with my clinic nurse, Danny Avelino. At first I think they’re just horsing around, but they’re a couple of beers from really mixing it up. “Maybe I can promote a ‘Battle of the Dans’ for the Wheelchair Fund Drive,” I offered in an effort to put an end to their wrangling. For a second they looked ready as roosters.

Their dustup provides the first loud or hostile words I’ve heard in my two years providing ENT outpatient care at the Castle Point VA Hospital in Wappingers Falls, New York. The sprawling campus features half-empty buildings, dramatic views of the Hudson River and its own twenty-foot replica of the Statue of Liberty with its torch and right hand missing and a shroud of pigeon droppings. In cutting back services, the VA reduced a once-busy full-service hospital to outpatient clinics and rehabilitation beds for veterans with problems that will never go away but whose speed and agility in their wheelchairs is impressive. Nobody has all four extremities. The nursing care is exceptional, the glue for the operation. First names and hugs all over the place.

Without admitting defeat, Dan reduces his squint to half-menace and drags his total steel left knee to the waiting room while Danny helps me set up the office for the day’s clinic, putting just-autoclaved tools into the exam cabinet drawers. The nasal speculae are made of heavy stainless steel and hold their heat, so the contest is to handle and stack them casually and not look like you’ve been handed a just-hard-boiled egg. He doesn’t have the calluses to stay with me and bristles when I reward his failed effort with a dismissive headshake and an inaudible mouthing of the ‘p’ word. Danny reminds me that in Wappingers Falls, Ireland and Italy are still too close together. His medical diagnoses for patient McGuire are dumbfuck, dirtbag, shitbag, douchebag, asshole. I explain that Medicare diagnostic coding requires that you can’t have more than two bags touching and he replies that “this freeloading motherfucker dragged everybody to a hearing, on a fucking Saturday, to see if the VA should build him a fucking swimming pool at his shithole, cinderblock pigsty. Therapy my ass!”

In a generally hard-of-hearing group Danny moves the men around like a working cow-dog. A quick bark of the last name at the waiting room door, then eye contact, then perfect choreography. With slight movements of forehead, eyes and eyebrows he gets people to where they should be. No one is asked to move beyond his own speed. The position or movement of the patient’s chart in his right hand silently scolds those who missed earlier visits or are late for no good reason. Optometry and podiatry share the same waiting room, and even the guys with post-dilation shades fall right in step. Except Dan.

Once in the office Dan makes a Popeye move with his still tightly strung forearms, then noisily sucks in a scowl and holds his right hand behind him at butt level to demonstrate that Danny put a flame about that high. Dan would take a hundred blows to land one on Danny’s dimpled chin. After scanning the room for bugs, he lifts his left eyebrow and hisses in a conspiratorial whisper, “I’d like to POP that fucking guinea,” and fires off his finger at my chest to demonstrate.

“A Luger would get you anything,” he says, and nods his head approvingly. “Anything.”

“What was the best weapon on our side?” I ask.

“A Luger.” He smiles as if I missed something obvious.

“So you kept what you got off the prisoners?”

“Not many prisoners,” he says, as he pops his finger again.

Dan fought across France with the paratroopers of the 101st Airborne,  a distinguished Army unit that was at the front of most of the big battles. Their casualty rate was about seventy-five percent. In earlier visits he recounted his experiences after D-Day. Today he speaks of the last year of the war. His voice is tentative, his eyes fixed on images still fresh in his mind. His chin betrays when buddies were lost as they pushed into Germany. Dan spoke German and Polish and was on loan to Patton’s 7th armored division when Dachau was opened up. His face falls now as if paralyzed, his eyes fill with tears that  I suspect have never really stopped for fifty years.

“There was a room full of skinned children . . . and in the next room was the skin being stretched.” His eyes close. His mouth curls into a masquer’s frown. He seems fighting for air as words escape one at a time, his lips barely moving. His head turns side to side, a plea that will be forever denied. “How . . .  could . . . I dream of this . . . God’s plan? There’s no fucking plan.”

He takes a deep breath and smears his tears over his cheeks with the back of his hand. “We got into trouble at Dachau. When we saw the piles of dead bodies and the shape of those still living, we dragged the SS guards into a coal yard and started shooting them. Shot the dogs, too. We were stopped by some officers before we got very far.” He lowers his voice to a whisper and confides, “That night we shot some of them in the feet and tossed’em in with the prisoners.” After a pause he continues. “There were rumors of courts-martial but Patton squashed’em all. When he toured the camp himself he said, ‘You should have shot every last one of the bastards!’”

Dan’s November office visit, four months later, reveals that he still can’t breathe through his nose but he hasn’t had any nosebleeds. His shirt is food-stained and he smells of armpits and urine. He’s shaved just the right side of his face. He still greets me with his boxer’s stance and a little duck-and-weave and shares a story about catching a couple Germans in an outhouse, politely waiting until they had finished their business before he and a buddy  ‘hung’em up.’ They’d speared them as they opened the door and shot them while their bayonets were buried in their chests.

As I walk him to the elevator I ask if we might have dinner near his house in Beacon. He suggests five o’clock at Brothers Trattoria, an easy-to-find Italian restaurant at 465 Main Street. On the way to dinner I drive through Newburgh, where a patient, a member of the city council, paralyzed city government when the council refused to pick up his bill for lunch. Apparently Newburgh ran out of money after the demolition phase of urban renewal. Across the Hudson at Beacon they’ve preserved enough Dutch colonial red-bricks to offset the tasteless utility of more recent buildings.

Brothers has a fancy new awning and a sharp exterior that would look at home in NYC. I skip the dining rooms set with white linen and choose the formica tables and plastic grape vines of the pizza cellar, half full of families with kids. It’s raining when Dan shows up at six in the same T-shirt he wore to the clinic. No jacket. He orders before the waitress can get her pencil out, and washes down a single slice of plain pizza with a Coke in about five minutes. I ask him where he last saw action with the 101st. His answer is blunted by the finger-popping gesture and a statement I’ve heard before, “Ya gotta do what’cha gotta do,” accompanied by a dismissive shake of his head. No answers to questions about Thanksgiving or getting ready for winter, no eye contact and no goodbye as he leaves after twenty minutes, looking up and down the street as he peeks out the door, a schoolchild searching for his bus.

When he appears on my patient list four months later, I share my dinner experience with Danny. He shakes his head, and turns his mouth down around a wrinkled chin. After a deep sigh he looks away. “He won’t be showing up today. He’s a mess. I saw him a month ago in cardiology. I don’t know how he even got to the hospital. He looked right through me like he’d never seen me before. Can you believe it? I thought I’d be in his crosshairs forever but the lights are going out. I’ve never seen it go this fast before.”

“I called in a favor and he’ll get the next spot across the street,” he says, gesturing toward the Soldier’s Home on the Castle Point campus. “They’re losing  a couple boys a month so it shouldn’t be too long. Turns out Dan’s got a lot of  medals . . . I mean the big ones, not just the I-was-there, unit-citation, candyass, bullshit medals. Two fucking Silvers! They should count for something.”

Patrick Stine was the last head and neck surgeon to serve in Vietnam. “Dan McGuire” is his first published piece.