We’re starting 2021 with a Friday Reads packed with recommendations set everywhere from the wilderness of British Columbia to modern day Nigeria. Recommenders from the TC team reflect on how their recent reading tackles issues of gender and sexual identity, strained familial relationships, and of course, a classic murder mystery or two.

Recommendations: My Cousin Rachel by Daphne du Maurier, We Have Always Lived in the Castle by Shirley Jackson, The Reconception of Marie by Teresa Carmody, The Wild Heavens by Sarah Louise Butler, The Death of Vivek Oji by Akwaeke Emezi 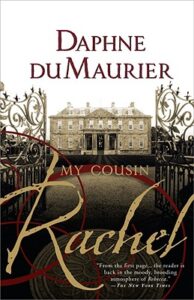 Over the past few years, I’ve read several contemporary books that draw on the aesthetic of mid-twentieth century gothic obsession: slick foreign vacation spots, devious women and dismissive men, a fixation on the lives of friends, families, strangers. These contemporary books felt labored and a bit silly, and made me wonder if I’d outgrown my teenage love for gothic-tinged fiction. Perhaps, I thought, I should accept my growing predilection for more sensible stories, ones with subtextual emotions and understated plots.

But then this fall I picked up a copy of Daphne du Maurier’s My Cousin Rachel, one I’d snagged at a used bookstore before the pandemic, and I remembered why this kind of fiction taps into the dreary and dreamy part of my brain. Like du Maurier’s more famous Rebecca, My Cousin Rachel takes place in a manor house in the British countryside and involves wealthy people with dark secrets. Main character Phillip despises his deceased cousin’s wife, Rachel—for isn’t she simply trying to steal his fortune?—until he falls in love with her, until he comes to despise her again, because perhaps she is trying to steal his fortune after all. This is melodrama, of course, but the power shifts are crafted with the care of a Sally Rooney novel, the setting details would put Emily Brontë to shame, and far from belabored and forced, the obsessions and the plot turns feel predestined. Who wouldn’t fall into hatred and love and then hatred again with this mysterious half-Italian widow? Reading My Cousin Rachel was a reminder to seek out the best versions of the kinds of books I love, and also a reminder that good fiction must never feel forced: a story needs to be airtight and inevitable, especially if it involves assignations in midnight corridors, impatient vicars, and symbolic dead bodies floating in rivers. Rather than making you raise your eyebrows, it needs to make you mutter of course while you pull the blanket tighter around your shoulders. 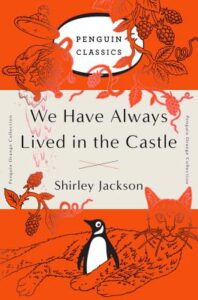 Shirley Jackson’s We Have Always Lived in the Castle; recommended by Franchesca Viaud (Volunteer Reader)

Mary Katherine is eighteen years old. She lives with her older sister and uncle in a large house on the outskirts of town. Mary Katherine, like her sister and her uncle, is a Blackwood. The Blackwood family is despised. We as readers don’t know why, at least not at first. We first follow Mary Katherine along her trip into the village to buy groceries. The townspeople stare, mock, and strangely enough, chant while Mary Katherine keeps her chin parallel to the ground and soothes herself by picturing them dead. We don’t know if we can trust Mary Katherine, a girl who is at once childlike and overwhelmingly angry, or if what she says happened is actually what happened. We do know that something isn’t right, both with the townspeople and most certainly with Mary Katherine herself. For a second, or maybe several, we think maybe she isn’t the hero of this story, and that maybe the townspeople are right to hate her. As the family’s history is revealed, we learn that besides Mary Katherine, her sister, and her uncle, the entire Blackwood family was poisoned at the dinner table some years back.

Mary Katherine’s sister is suspected of the crime for a number of honestly rather logical reasons, and is arrested then acquitted—a progression of events that the townspeople take great offense to. They express this by terrorizing and ridiculing the Blackwood family, with Mary Katherine bearing the brunt of their nastiness. Through Mary Katherine’s recounting of events, we get the sense that every day is much like the last, and that every day will continue as it has forever and ever. No one is more pleased by that prospect than Mary Katherine. That is, until cousin Charles arrives and brings with him something different—the very last thing Mary Katherine wants. She’s forced to protect what remains of her family against the threat he poses. “I’m going to put death in all their food and watch them die,” Mary Katherine says of her plans for the townspeople. The most interesting aspect of We Have Always Lived in the Castle is the way Shirley Jackson makes evil ordinary, transforming it into something as banal as folding laundry. But amidst the ugliness in this story there is magic, magic that appears to be both real and imagined. 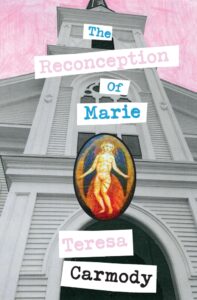 Even if you were never a precocious preteen from the corners of the Midwest’s smallest town with a head full of ideas and a soul of vim and vinegar, this book is still for you. Marie is smart. Too smart. Amidst a household of born-again Christians, she takes the Lord’s work on the road, evangelizing her schoolmates and often herself. She’s got guts like an intuitive car salesman and the intuition of a burgeoning therapist—with a psychological sleight-of-hand she coaxes her unknowing friends into signing the deal of a lifetime. Well, the deal of this life and the next. Set against awkward middle-school friendships—Who’s your crush this year? You can only be in our friend group if you like a boy, but not the same boy as Jennifer, okay? —Marie desperately wants to know herself, in God’s eyes and everyone else’s. With the relatable earnestness of an 8th grader, in that tender sweet spot between naïve babe and newly-minted adult (with just enough space for a hearty set of convictions laced with hormonal anxiety), Marie tries to disentangle her body, mind, and soul.

Reconception is an experiment in the synapses that inform your identity: gender, religion, geography, sexuality. Author Teresa Carmody draws on passages of scripture, diary entries, vociferous prayers, and vaults of maxi pads to narrate Marie’s childhood in Western Michigan’s Bible Belt. Carmody excels in the exquisite pain and humor of existing during puberty. Her Marie is as matter-of-fact about the objective Divine as she is sure that gossip is sinful…but she does it anyway. (Hey, Jennifer gossips too!) Marie’s precision of mind feels like a spiritual spreadsheet. Carmody writes her heroine as a meticulous thinker, a girl who diagrams her sentences like a switchblade (included in-text for your English class throwback!). Eliding the genre coming-of-age novel, this book makes you feel like you’re coming of age as you read it. Marie is still the anxious presence in the back of my 35-year-old mind dressed in adult clothes and driving a 13-year-old Honda CR-V. She cuts deep. I cackled my way through this gorgeous book, pausing to cry and cringe and reflect. This Midwestern gal feels the cut. And boy, it smarts. 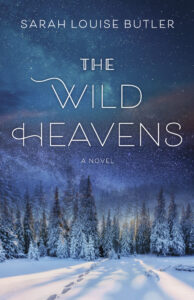 Once in a while, I come across a book that begs to be read slowly, one that calls me to immerse myself in the landscape and befriend the characters. The Wild Heavens, Canadian author Sarah Louise Butler’s debut novel, was such a book for me. Last summer, the world was in the throes of a pandemic and we were asked to stay close to home. With nowhere to go, I escaped to the hammock on my deck and delved into fiction. The Wild Heavens was a welcome respite from the worry and confusion around me. I delighted in every single page.

Aedan Fitzpatrick, a well-respected veterinarian, has dedicated his life to finding the big-footed creature he is sure inhabits the wilderness around his cabin in the interior of British Columbia. Since the day he first set eyes on the large tracks and caught a glimpse of a furry human-likeform, he has become obsessed with seeing him again. When his daughter dies in Ontario, Aedan adopts his young granddaughter and raises her on his remote property. Sandy grows up roaming the woods, swimming in the lake, and playing with Luke, a boy her age who lives with his mother on the same property. The search for Charlie, the name they’ve given the elusive creature, becomes an obsession for all of them, and ultimately, the quest to find him leads to tragedy and changes their lives irrevocably.

Butler’s prose is clean and precise. She writes about nature with attention, detail, and a reverence that stirs awe in this reader. She notes the presence of tiny mushrooms and lobed lichen, the swoop of a downy woodpecker, and the calmness of the lake in a way that caused me to pause and breathe deeply. This is a book to savor. Even if there hadn’t been a global pandemic, I would have carved out the time to linger in these pages and wallow in the beauty of the natural world Butler describes. The Wild Heavens is about mystery and love, ache and grief, and the quest for what we feel is true. The intricacies of a life in the woods are woven together in such a beautiful thread that you can’t help but weep when it is all over. This is a beautiful book! 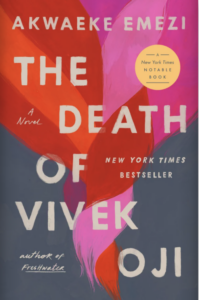 To be drawn into The Death of Vivek Oji is to be immersed in the life of author Akwaeke Emezi, and the life of his family in modern Nigeria—from his distant father, Chika, to his overbearing mother, Ahunna. The reader must encounter a range of emotions to uncover why and how protagonist Vivek’s dead body ended up on his mother’s doorstep. From the first page, Emezi’s words are moving and powerful, full of details on how Vivek’s parents met, what drew them together and, ultimately, what drew them apart.

Emezi’s book brings care and sensitivity to the subject of gender identity and what it means to live an authentic life. As Vivek’s parents come to understand, he has been hiding secrets of his own. What’s most powerful is that only a few chapters are told from Vivek’s point of view. By including multiple narrators, including Vivek’s cousin Osita, Emezi paints a fascinating portrait of someone who was often misunderstood, but longed to be understood, and loved, by all. Throughout the book, Emezi’s words force readers to consider a question: What is it like to lose someone you thought you knew, but didn’t know at all?