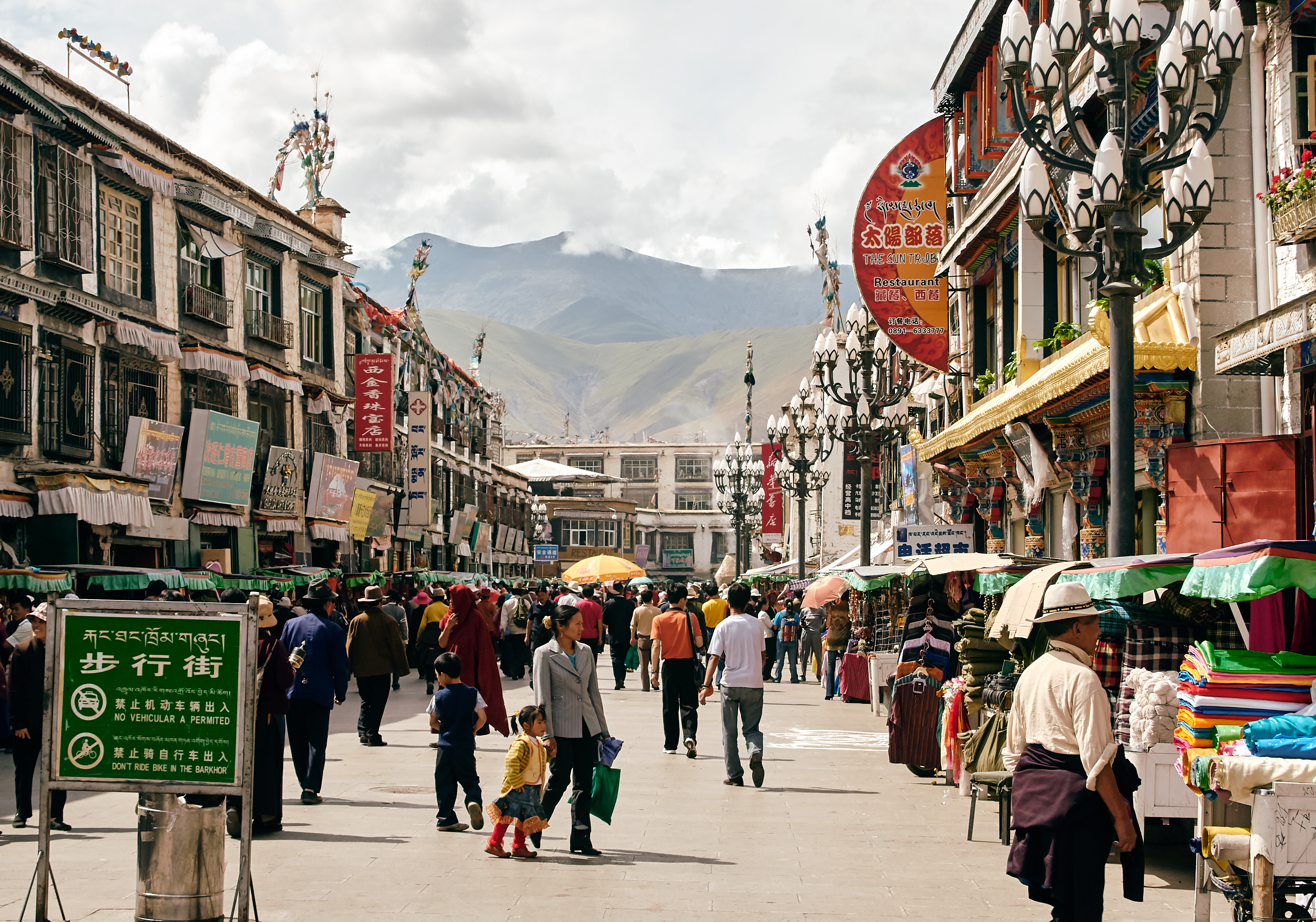 When I wrote to you previously I was living in Darjeeling. I had by then just begun my transformation into a Chinese person. There is truly no weight in this world so burdensome as nationality. However, since on the whole there is little inquiry as to whether or not someone is of the so-called “Chinese” nationality, I have managed just fine. You no doubt remember giving me the nickname “the Wandering Jew” in our preparatory school days. It would seem that at long last I have come into my own as this “Wandering Jew,” just as you foretold. Yet, this Tibetan Lhasa alone has come to suit me well, though it is not for love of the weather or scenery. In truth, it is for the delightful practice of considering sloth not a vice, but a virtue.

You, being learned, surely know the name given to Lhasa by Pandita Atisa. However, Lhasa is not necessarily a town of shit-eating hungry ghosts.2 In fact, it possesses a certain charm, which rivals even that of Tokyo. Still it is the sloth of the Lhasan townspeople that must be regarded as a heavenly spectacle. Even now, the wife is, as ever, indulging in a quiet siesta, knees spread motionlessly akimbo in a doorway scattered about with barley straw. This is not just in my home—in any given household, there are undoubtedly two, three people asleep in each entryway. A scene so awash with serenity could not be found anywhere else on this earth. What’s more, high overhead, the faint, pale sun above the towers on the Lamaist3 temple glitters idly off the snowy peaks that envelop Lhasa.

I intend to live in Lhasa for at least a few more years. Besides this delightful practice of sloth, I have perhaps become more than a little taken by our wife’s charm. Her name is Dawa, and she is known to be the local belle. Her height is just above average. Her face, like the name Dawa (Dawa means “moon”), is that of an exceptionally kind woman—with eyes squinted in a bright white band running beneath its filthy facade. I have made some mention already of there being, together with me, four husbands. The first husband is a peddler; the second a corporal in the infantry; the third a master of Buddhist painting in the Lamaist tradition; and the fourth is myself. Though nowadays I am not without occupation—somehow or other I have ended up as a local barber of some reputation.

You, so upright, surely cannot help but scorn someone like me who has resigned himself to polyandry. However, if pressed, I would say all forms of marriage are based solely on convenience. The monogamous Christian is not necessarily any more virtuous a person than we heathens. Though in reality, both polyandry and polygamy are no doubt present in any country. Indeed, monogamy is not completely absent in Tibet. It is merely held with a certain disdain by its name, rukuso minzu (rukuso minzu means “abnormal”4), in much the same way that we have earned the scorn of civilized nations for our polyandry.

I do not feel the least bit inconvenienced in sharing a wife with three other men. I am sure it is the same for the other three. She loves all four of us husbands equally. While still in Japan, I of course shared a single geisha with three other men. Yet in comparison to that geisha, Dawa is some kind of Lady Bodhisattva.5 In fact, the painter has given Dawa the apt name of Madame Lotus. Her image, even now with a nursing child in arm beneath the riverbank’s weeping willows, must be said to bear a halo. The child, who must be about six years old now, is one of three. Of course, no one bothers trying to figure out who fathered each. While the first husband is called “father,” we other three are called “uncle” just the same.

Still, Dawa is a woman. She is not without her missteps. It was just two years ago now that she deceived us with the sales clerk of a merchant who sold coral and the like. The first husband, who made this discovery, came to us in private to consult about some sort of remediation. On hearing this, the second husband, the corporal, was infuriated. He proposed we immediately cut off both of their noses. You, of such mild manner, will no doubt find fault in such a crude proposition. However, the cutting off of noses is a form of vigilante justice in Tibet (for instance, like the muckraking of civilized nations). The third husband, the painter, then began merely sobbing in bewilderment. I subsequently made the suggestion that, after we three had cut off the nose of the clerk, Dawa’s punishment be left to her own sense of remorse. Of course, no one really wanted to cut off Dawa’s nose. Thus the first husband, the peddler, quickly assented to my plan. It seemed the painter might have felt some compassion for the poor clerk; however, he too in turn expressed his agreement so as to not anger the corporal. Finally the corporal, at long last after thinking it over, with a deep sigh remarked that “there are children to think about” and decided reluctantly to abide by our plan.

The next day, the four of us easily bound up the clerk. The corporal then took my knife and in our stead unceremoniously sliced off the clerk’s nose. Make no mistake—the clerk shrieked and cursed and snapped at the corporal’s hands. Though he still wept with gratitude for the peddler and I, who applied a styptic to the wound where his nose had been sliced off.

You, astute as you are, can surely guess for yourself as to what followed. Dawa has loved us four with fidelity ever since. And we too—it goes without saying. In fact, just yesterday the corporal even confided in me that “as I think on it now, as bad as things were, at least we didn’t go and chop off Dawa’s nose.”

Dawa, who has just now awoken from her nap, is about to take me out on a stroll. So, in wishing you well across distant seas, I will bring this letter to a close. In the home gardens of Lhasa, the peach flowers are in the peak of their bloom. Though today, no fortunate winds blow. From here, we intend to head to the stockades where an illicit couple who married as cousins are on public display before their imprisonment….

Note: Original title Dai yon no otto kara, published in March of 1925 in the Osaka Daily, Sunday edition. The story is a fictional account based on several travelogues of Japanese men who traveled to and returned from Tibet, in particular that of Kawaguchi Ekai (see his Three Years in Tibet).

[1] Transliterations of the Tibetan are consistent with their phonetic rendering in Japanese, which was then unstandardized.

[2] Atisa Dipamkara Srijnana (982–1054) is known for coming to Tibet from an area in modern-day Bengal in order to reintroduce Buddhism after a period of supposed moral and spiritual decay. On arriving, he is reported to have likened what he saw to the realm of hungry ghosts—a state of beings who have been reborn below humans in the hierarchical, six-fold cosmos adhered to in most Buddhist traditions. They are said to starve but, through various physical impediments of their state of being, wander the earth unable to sate their appetite.

[3] “Lamaism”—from the Tibetan name for a teacher or master, “lama” (bLa ma)—was a term used in both English and Japanese to refer to various forms of Tibetan Buddhism until the mid- to late-20th century.

[5] In Japanese “nyobosatsu,”—literally “female bodhisattva”—which can refer to either an enlightened being who has not yet become a Buddha, often in female form or a colloquialism for a female sex worker.

Ryūnosuke Akutagawa (1892–1927) was a Japanese author known for his short fiction, including “Rashōmon,” “In a Grove,” and “Hell Screen.” His writing is deeply informed by an interest in pre-modern East Asian literature, Christianity, and his travels in China during the period of Japanese colonization. Akutagawa is also the namesake of one of Japan’s most coveted prizes for new and rising authors.

Nathaniel Gallant is a graduate of the University of Michigan with a master’s degree in Japanese studies, for which he researched intersections of modern literature, translation, and Buddhism in East Asia. He is currently an independent translator of literature and philosophy, concentrating on representations of Asian religious traditions in the modern world.