I’d had grander plans for the day, of course, plans that involved walking through Bur Dubai, the old city, and the souks in Deira and visiting the beautiful Jumeirah Mosque, but the mosque tour was early, at 9:45, and nearly a 40 minute cab ride away… and then there was the heat. Even sitting in the shade in early morning, I was sweating.

No, we would not be setting foot on city sidewalks today. This was a blow to my touristic romanticism, my plan to experience the places where some semblance remained of the daily life that had characterized Dubai before the race to the top. Before the spectacular towers, malls, and hotels upon which superlatives are pinned.

So the question became, which mall should we go to? The Dubai Mall had one of the biggest aquariums in the world, featuring the single largest piece of plexiglass ever made, plus an underwater zoo; while the Mall of the Emirates boasted an indoor ski slope. Also, a Shake Shack. We took the path of least resistance – a disturbingly frequent occurrence in Gulf humidity– and decided on the Dubai Mall because that’s where our friends were headed. We briefly considered a twofer, stopping first at the Mall of the Emirates for a peak at the snow and a burger, but we settled for a drive-by, pointing at the shiny metal zigzag stretching from way up high down to the ground: the bunny slope. 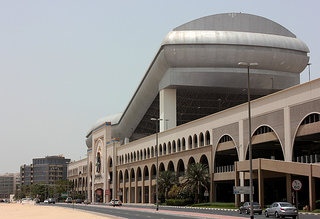 E11 is the highway connecting the gleaming Emirati sisters Abu Dhabi and Dubai. The former is more sober and was slower to develop while Dubai wears shorter skirts, though both have grown so rapidly no royal parent could possibly keep up. The 150 kilometers between the two are blown by desert sand and handfuls of scrub and punctuated with sudden electrical towers or a bridge careening inland. On the other side, the teal and sparkling Gulf. There’s talk of a high-speed train linking the two coastal cities. Now, a silver-bullet monorail begins some kilometers outside Dubai and shoots alongside E11 into the center. Despite evidence of the global financial downturn, such as the number of To Let signs hanging on the glassy sides of empty buildings, coming into Dubai on E11 passing the Burj Al Arab, the Burj Khalifa, and the Emirates Towers feels like an event, as so many arrivals do.

Since the mid-1990s, oil-rich Dubai has embarked on a series of megaprojects, staking its claim as the newest and worthiest center of global capital and luxury tourism. In the absence of the historical and cultural achievements of Arab cities such as Cairo and Beirut, Dubai has seized upon building the best and biggest as the most effective way of joining the international scene and leaving behind its modest origins. Asian cities like Hong Kong and Singapore are no strangers to this endeavor, but Dubai may have surpassed them on the scale of “spectacular urbanism.” In his 2009 book, Dubai: Beyond the Spectacle, Yasser Elsheshtawy applies French theorist Guy Debord’s definition of spectacle—a cultural force that becomes objectified, iconized, and renders its audience passive—to urban architecture and examines the city’s astonishing explosion. Dubai, almost more than any other city, Elsheshtawy says, “has made the spectacle its raison d’être.”

Among the spectacles: the Burj Al Arab. (Burj is tower in Arabic; abraj the plural.) When it was finished, in 1999, it was the world’s tallest hotel and remained so for ten years (now it’s in the top four; at number one is Saudi Arabia’s Mecca Royal Hotel Clock Tower, nearly twice the height of the Burj Al Arab). The hotel’s distinctive sailboat outline and exclusivity—its (debated) seven-star rating and location on an artificial island accessible only by boat and helipad—make it visually and practically different from any hotel that had come before. 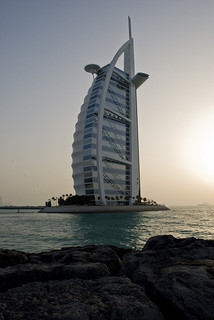 Palm Jumeirah was designed to be the world’s largest man-made island. A coastal construction far south of the pearling and fishing village that was the entirety of Dubai until the 1960s, the island is shaped like a palm tree and extends 5 kilometers into the sea, with seventeen huge fronds branching off the main trunk and encircled by a protective barrier “reef.” Home to the Atlantis hotel, whose architectural style is termed “Arab eclectic” (read: Alladinesque), Palm Jumeirah Island is visible from the moon, intentionally so. Another fronded island, Palm Jebel Ali, is under construction just down the coast.

The Burj Khalifa, opened in 2010, is the tallest man-made structure in the world. Its new-fangled “skin” reflects desert heat and glare, and the inspiration for its stepped profile is supposed to be the Hymenocallis flower, though that narrative, Elsheshtawy points out, was added after the building’s design was submitted.

Dubai’s impressive megastructures certainly have great implications for the city’s image, and for the monied investors whose confidence is buoyed by the iconic status of their dirhams at work. But the fantastical buildings also affect visitors. They enforce the impact of arrival—beholding a site that exists nowhere else in the world. Simply laying eyes upon the spectacle, even glimpses between skyscrapers or through a car window, can be the fulfillment of a kind of pilgrimage.

Pilgrimage takes many forms, Australian writer Shirley Hazzard says in her exquisite, compact book of ruminations on the city of Naples, The Ancient Shore, written with her late husband, Francis Steegmuller. While pilgrims of the past endured “much solitude, silence, inconvenience,” this is far from the case for travelers to the urban frontiers of Dubai, and Hazzard clearly views the short-lived “jaunts” of modern travelers who arrive “in haste, in crowds” as a significant experiential downgrade. Such rapidity of arrival means “Destiny has no time to set her wheels in motion.” However, Hazzard does allow for the possibilities of even the most fleeting sight-seeing. “Since there has been a goal,” she says, “there can be revelation.”

“Revelation — so inalienable an element of travel that there is even a luggage of the name — takes multiple and often inward forms. Many a traveler departs in the hope of defining an elusive self or mislaying a burdensome one, of being literally carried away. Literature has prepared us to expect the release of new aspects of ourselves in the presence of the fabled and unfamiliar. Simply by looking upon given scenes and monuments human beings have been known to become happier and wiser. …

“Even the tourist who only glimpses, from a sealed bus, the Eiffel Tower or the Colosseum, seeks his particle of the holy relic of the world’s experience. And how much passion and event have been invested in those famous sites that they should continue to yield meaning — even to the millionth and most casual eye — with unstinted generosity.”

Hazzard is talking about European pilgrimages, travel to places that have “long and greatly been,” and it is the artistic inspiration of past centuries she evokes. No doubt she would abhor Dubai’s flaunted consumerism, but I’d like to suggest that, brash materialism notwithstanding, travel here in the emirates is a peer around the bend into the future, no less a stimulus to the imagination than the relics of the past.

The Dubai Mall is a very, very nice mall. It did not appear to me in our wanderings to be an architectural wonder, but fountains rushed pleasantly down walls and natural light poured in, and it was absolutely spotless despite being thronged with people. Numerous touchscreen directories allow lost shoppers—i.e., everyone—to search for stores by type or by name; the screen then charts a red route from here to there, noting necessary escalators. Still, we managed to spend 40 minutes getting from the bookstore to the movie theater —with only a simple espresso stop in between – when the two are in fact on the same level and just a brisk seven-minute walk apart. The aquarium, I regret to say, was old news, because there was also a stunning array of fish and sharks and stingrays at our ridiculous hotel. Our desire to marvel at sea creatures behind glass had been fully sated. 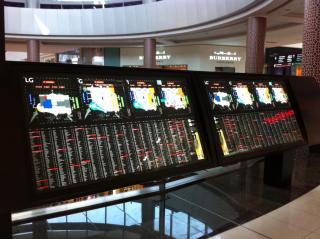 The Mall has 450,000 square meters of gross leasable area.  Compare this to the 260,000 square meters of same in the Mall of America in Minneapolis. Outdoors, the Dubai Mall has “the world’s most spectacular fountain” with sprays of water 150 meters high, “more than a thousand unique water expressions set musical pieces, and over 6000 light and color projectors.” Also advertised: an ice skating rink, and Dubai’s “only indoor-outdoor streetscape under the only retractable roof in Dubai.” As these boasts and the annual Dubai Shopping Festival indicate, retail experiences define the city.

After ravenously feeding our hunger for print books (the heavy stuff was shipped from the States by boat and would not arrive for several more weeks) at the mall’s single purveyor of non-greeting-card printed matter (out of 1200 stores), we settled in for more than two hours of rollicking fun watching “The Bourne Legacy.” The theater’s plush seats were packed with a diverse urban crowd; the picture and audio were impeccable.

If this sounds like a disappointingly suburban weekend for a city with so much bizarre and obscene promise, it’s partially true. Our exposure to the spectacular was minimal, and not much was revealed to us about embedded ways of life or evolving thought. As Hazzard says about discovering Naples’s ancient charms, “One needs leisure; one needs imagination. And something more: vulnerability. Vulnerability to time interleaved; to experiences not accessible to our prompt classifications, into the impenetrable phenomenon of place, which no one, to my knowledge, has ever explained.”

Luxury, offered in abundance in Abu Dhabi and Dubai, is not leisure. Leisure is unhurriedness, being free of schedule and comfortable of body. So the more leisurely and vulnerable explorations of Dubai—the walks that get closer to and then go beyond the spectacle, into the older and plainer parts of the city transformed, in Elsheshtawy’s words, through their cultural mix “into a set of vibrant spaces that underpin a humanity and spontaneity”—will have to wait for cooler weather. This is okay; there will be a next time. This first jaunt was the Dubai album’s opening snapshot. The second trip, then the third, can be interleaved with the first, and in this way a slower and more involved narrative made.

On the drive back along E11, after zooming through the nighttime desert, seeing natural forms and green-lit mosques I’d missed during the daytime drive to Dubai, as we entered Abu Dhabi I knew what we were passing not from maps and roadsigns but from previous experience. Experience is accruing. Several blocks before our own tower, I knew we were arriving because I recognized shops and landmarks. That peculiar chest tightening that signals familiarity—I felt it. Though I cannot yet use a laden term like home, this simple recognition was sufficient. We had gone just far enough to experience coming back.