MN: You grew up in Brooklyn, so would you define yourself as a “Brooklyn writer” more than a “New York City writer”?

PL: I would define myself as a New York City writer, Brooklyn being part of New York City. I was in Brooklyn during my childhood, but Columbia College took me to Manhattan and I lived most of my adult life in Manhattan. It’s only in the last eighteen years that I’ve returned to Brooklyn. I keep being invited to write about Brooklyn now and participate in Brooklyn literary events but I don’t actually think there is a Brooklyn style of writing. The forces that go into making a New York writer prevail in Brooklyn as well — a certain approach to stress, impatience, and stoicism. And a humor, which is sometimes a gallows humor.

MN: In your essay on the High Line, you describe modern-day Manhattanites as narcissists compared to their earlier, more productive counterparts. What do you mean by this?

PL: In that essay I say that New York has evolved from being a manufacturing center to a place that sells its own self-image — but perhaps that’s more of a marketing strategy than narcissism. I do long for a period in the past when New York felt more like a working-class city, and when actual goods were manufactured, not just services, real estate, finance, or Wall Street… That is a New York problem that promotes provincialism, which is too much focusing on self-image.

MN: You said that New York is in all of your writing. Have you had to cultivate awareness of place throughout your life as a writer, or has that awareness come to you naturally?

PL: I think that when I was a child I knew nothing else than my environment – I didn’t understand that there were any other ways of being. I grew up in a ghetto in Brooklyn, and I wasn’t aware there could be anything else beyond the inner-city ghetto life. Then I went to Columbia University as an undergraduate and I felt very much like I had a chip on my shoulder; that I needed to be faithful to the old neighborhood, the old ways, to a less privileged environment.

I began writing in my teens and by the time I was twenty-one I was committed to being a writer. I naturally wrote and set everything in New York City because that was what I understood. But it was a more unconscious process. It wasn’t until my mid-thirties, after I’d published a few books, that I became much more aware of urbanism as a subject. I took some classes in architecture, the history of cities, and urban policy, and began writing consciously about public space, and about ways to promote urbanism. Jane Jacobs’s The Death and Life of Great American Cities and Robert Caro’s The Power Broker went a long way towards pushing me in this direction.

MN: This literary journal takes its inspiration in part from the English communal village green, an open-air space that was used by villagers for grazing animals and meeting. Do you think public parks in New York City function like the commons of old England?

PL: One of the great attributes of city life is that there are public spaces that operate as the equivalent of English commons. I don’t find the High Line to be one of them. The High Line is too much a conduit, a “people mover,” rather than a place to congregate.

An example of a park that functions as a commons is the old City Hall Park in lower Manhattan. This park takes the run-off of humanity from all the streets around, it has lots of benches and people use it all the time. It functions very efficiently and prettily as a place for people to gather, to rest. So it’s not moving you on. Part of this is because City Hall Park is for the locals, it’s at-grade and is integrated with the neighborhoods around it; the High Line is for tourists, it doesn’t have that much to do with the surrounding area. 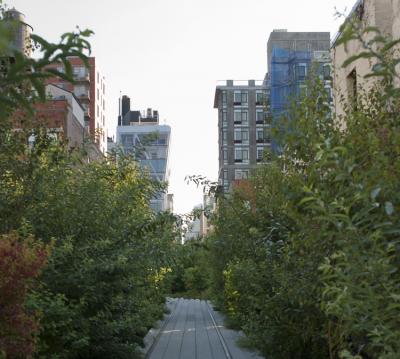 MN: Both the parks you mention regularly install or perform public artworks. How do artworks affect the public’s use of, and relationship to, communal space?

PL: Usually public artworks have to be somewhat abstract in idiom. In City Hall Park they often have abstract sculpture, partly because Mayor Michael Bloomberg is an art lover and has advocated this. I very much like the idea of sculpture and public art works. Sometimes I feel there’s a precious quality in some of the art works on the High Line, an intimation of some theme that’s metaphorical, but that no one passing quickly by is going to get. But I’m glad for the use of public art in the High Line because the park needs every bit of variety it can get to prevent it from being a horizontal escalator. The art gives you a chance to look left and right. 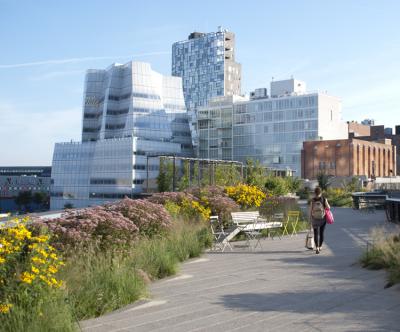 MN: How do you think the public uses, or relates to, communal space when the art-form on offer is literature and writing, rather than sculpture?

PL: I’ve read a fair amount in open spaces. Sometimes the wind competes, sometimes helicopters. You can never be sure you can hold an audience — people will move on the fringes of the event and then move off, which can be dismaying to the reader. It’s not the ideal way to listen to love poetry, let’s say.

Yet reading in public is an oddly self-congratulatory format. People feel good about listening to literature, the writer feels good about contributing to the general cultural level. But it’s a kind of trade-off. In bars, I was competing with drunks and the football game. It’s hard to create a hushed, intimate atmosphere in such a place.

MN: Do you go to parks to write?

PL: I never write in parks. I go to parks to enjoy the spectacle of humanity, the trees, the play of water, and so on. So I write at home, I write at my desk. I don’t write in cafes. I do feel that writing is a solitary act and I don’t want to feel that someone could be looking over my shoulder.

MN: So what does it mean to be a writer – someone bound to reflect, to look inward or at the very least be alone and quiet during part of the day – in a place that celebrates exhibition and extroversion like New York City?

PL: New York may celebrate exhibition, but it’s also, famously, a place of solitaries. It’s no longer a paradox to be alone in a crowd. Many people come to New York City to escape the intrusiveness, the nosiness, of small town life. They come for anonymity. The city certainly offers opportunities for solitude — as well as loneliness and lonesomeness.

MN: Is modern-day New York City a difficult place to be a writer, or an easy place?

PL: For me it’s a great place. But of course I know it fairly well, and I understand it a little. I have always resisted this scenario about the death of New York, or the idea that it had lost its soul, or any of that. I think because I have lived here all my life I find such narratives sentimental. New York is too complex, too various, to die or to lose its soul. That is, some parts of it die and others are reborn.

You also have different immigrant groups bringing different vitalities to the city. I was recently out in Flushing, in an area that is almost completely Chinese, and it really was like being in a foreign city, it was very exciting. I love that reinvention quality of the city. And I do think New York is a city that immigrant writers are drawn to: Russian, Chinese, Haitian.

New York is filled with people who are very talkative, which is always good, because the universe of words bounces off you here and you can steal more easily other people’s witticisms. This is a place that encourages wit. I think it’s a great place to be a writer.

Melody Nixon is a New Zealand-born writer living in New York City. She is working on a collection of lyrical short prose pieces investigating place, home, and identity.

Phillip Lopate is the author of a dozen books, including Waterfront, Being With Children, Portrait of My Body, At the End of the Day, and Notes on Sontag. He has also edited The Art of the Personal Essay and American Movie Critics. He is a professor at Columbia University School of the Arts, where he directs the MFA nonfiction program, and he teaches at Bennington’s low-residency MFA program.