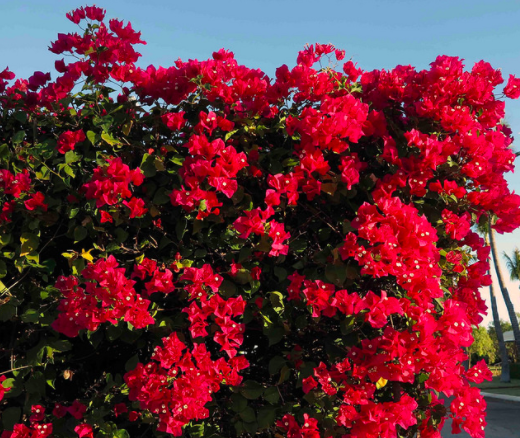 The high stone wall guarding Gabriel García Márquez’s vacation house in the hills of Cuernavaca, Mexico was a foot thick and topped with broken glass. Bougainvillea spilled over the top and formed a magenta canopy over the wall’s wooden door.

I stared at the buzzer and intercom, my Spanish-language copy of The Incredible, Sad Tale of Innocent Eréndira and her Heartless Grandmother gripped to my chest. Up the street, my friends Honoria and José leaned against the hood of their Dodge Dart. Honoria gave me a sympathetic smile. José, a housewares salesman, gestured me forward.

“I can’t,’’ I shouted, my black hair sticking to my neck as the afternoon sun beat down. “I’m chicken.’’

It was 1991 and I was in Mexico to bone up on my Spanish. Honoria and José were my host parents, and though simpatico in every way, they couldn’t relate to my literary crush on García Márquez. I asked them, doesn’t everybody fall in love with a book? While I was reading One Hundred Years of Solitude, I slept with it under my pillow, to absorb every last particle in my dreams. With each of his books, I fell deeper under his spell until the books and the man had blurred in my heart. I thought I’d burst when Honoria said: “We’ll take you to his house and you can meet him yourself.”

I brought my quivering finger to the buzzer and imagined the scene that might unfold if he answered. “I love you more than any author on earth,’’ I’d gush. “One Hundred Years of Solitude has the best opening paragraph in literature. And thank you for inventing poor little Eréndira. And regarding Love in the Time of Cholera! I wanted to kill that creaky bachelor but I give you credit for making me hate him…and will you please sign my book?’’ Then I’d collapse at his feet, sobbing, and wait for a benediction. He’d ask me to rise and invite me in for a glass of aguardiente.

But it could go the other way entirely! What if a maid came to the door? “Fifty fans have already been here today. Come back tomorrow.’’ Or what if his wife Mercedes answered? “Ay, dios. Not another one. Stay away from my Gabo! Stay away, I say!’’ Or, worst of all, what if The Maestro himself ushered me in and one thing led to another? Was I really prepared for a May-December fling with my idol? Had I come all this way just to inspire a few pithy lines in some future book, like….Memoirs of My Melancholy Whores? My skin tingled with alarm. I looked at my friends again. José swatted air as if to say, you’ll never do it.

Truth be told, I would have had a heart attack if García Márquez appeared at his door. All I really wanted was to blurt out my feelings, meet his eyes, and flee. For what business did I have bothering a Nobel laureate? I was a nobody from the wrong side of Los Angeles. I come from a long line of border hoppers, schoolyard athletes and bad cooks. A dot in his galaxy of a million dots. Not to mention my Spanish was terrible under pressure.

But this isn’t what I was thinking as I stood outside his door. I was thinking, it’s me, Gina, one of your biggest fans. Open up! Put me out of my misery. Give me something—anything—to cherish the rest of my days.

I played out the ridicule I’d have to endure if I chickened out. “She didn’t have the nerve,’’ José would say back at the house. Honoria would be kinder but resolute. “That was her only chance. Our car won’t make it up the hill again.’’

Determined not to live with regret, I plunged my finger into the buzzer. I stepped back and waited. All I could hear was the soft rustling bougainvillea above my head and the far-off call of somebody’s macaw. Emboldened by the probability that nobody was home, I buzzed again. Still nothing. I pressed my ear to the door and listened. Nervousness gave way to disappointment. Wait! What was that? A tiny scratching sound. I closed my eyes to hear it better. Yes, I knew that sound. I had a brother in pest control. The muffled sound of herbivores munching is distinctive. Gabriel García Márquez had termites!

I opened my eyes, which were now blurred with joy. As I pictured those puny bugs devouring their banquet in woody seclusion, the enormity of my discovery began to sink in: The man was human, and he’d tackle his problem like anybody would, with profanity and the right bait. That I was there to bear witness to his humanity was a gift more valuable than an autograph could ever be.

I was going to knock one more time but decided he was already inundated with enough pests. Instead I kissed the door and walked back to my friends, who immediately misread my flushed cheeks and wet eyes.

Honoria chimed in, “At least you tried.”

Gina Lujan Boubion’s short stories have appeared in The Antioch Review, Reedmagazine and others. A former newspaper reporter, she lives in New York City and grew up in Los Angeles, where her paternal grandparents settled after leaving Sonora, Mexico during the Mexican Revolution. She holds an MFA from Bennington College.