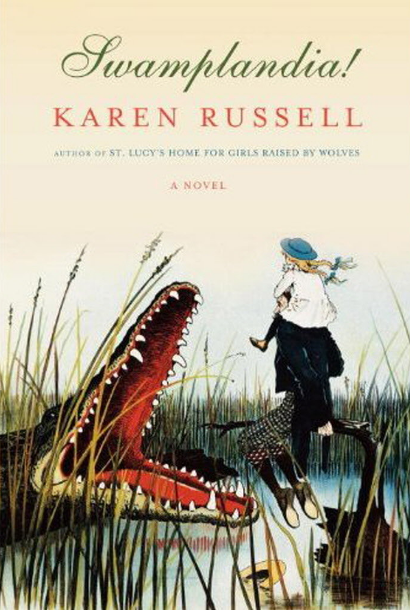 Book by KAREN RUSSELL
Reviewed by RACHEL B. GLASER

Karen Russell’s novel Swamplandia! (based on one of the stories in her collection St. Lucy’s Home for Girls Raised by Wolves) is the mystical coming of age story of Ava Bigtree, a skilled alligator-wrestler at her family’s failing theme park in the Everglades. Setting plays an important role in this book, and made me notice the settings within a setting. Swamplands, swamp flies, buzzards, and a feverish humid mud mash surround the narrative. Since Swamplandia!, the Bigtree’s theme park, is also a family history museum (Ava’s mother’s wedding dress is on display among other exhibits), family is a setting. The conflation of family and place familiarizes the wildlife around the reader (Ava calls all their alligators “Seths”), while also revealing the darkness and wilderness of a family.

The book begins with the aftermath of the death of Ava’s mother (the legendary wrestler of Seths, who died of cancer). “Nobody had told Granpa Sawtooth that our mother was dead. I could feel the secret rolling between the four of us like an egg in a towel.” The death of Hilola Bigtree seems to break down communication in the family. Eventually every remaining Bigtree has scattered, lost in their own plans. Ava speaks of waiting for her sister, “I lay awake awaiting for her return until 3:22am. When you are waiting for somebody for that long, your ceiling fan can whip ordinary air into a torture.” By this point, her sister is dating a ghost. Her father has left in a last ditch effort to raise funds for the park. Ava’s genius brother, Kiwi, is working minimum wage in a truly hellish atmosphere. The most precarious moments of the story come when Ava sails with an ominous stranger to the entrance of the Underworld looking for her sister Ossie, who has left to elope with her dead boyfriend.

Russell’s Ava is a well-spoken girl of thirteen. It is difficult to remain unmoved by her bravery, which is established in the opening pages. She is fearless in her alligator wrestling, her love, and her honesty. “Later I had to raise the baby rats she ate, and why I thought one creature was my beloved pet while the other creatures were food is still a mystery to me. That was my first clue that love can warp a hierarchy; the whole pyramid flipped on its head.” The writing in Swamplandia! is playful without being lighthearted, as when describing the early moments of Ossie’s beau, “So this kid had missed it totally, then, his windy little interval between birth and death.”

The book falls into an alternating chapters pattern, following the characters, each humbly plotting their own precarious steps forward. But again, the settings are what most impressed me, especially “The World of Darkness,” a rival theme park, a horrid, plausible place that represents the coldness of commercialized fun. In a larger sense, Swamplandia!’s defeat against this slick, heartless competitor speaks to the fall of small, independent businesses. Also, in some moments, the savage unpredictability of nature both thrills and scares the reader, a reminder that a mutation can be as interesting as it is terrifying.

The book earns its weirdness, and actually has room for much more. Russell so comfortably sets up Ava’s unusual school-less adolescence—her family’s innovative way of life, the possibility of spirits (the stories of ghosts are explained at length), a “library boat” bobs in the water—so I was disappointed when the weirdness didn’t stretch into even stranger territory, a place the reader couldn’t look back from. Russell works in the other direction, the way of reality, a far more familiar feeling then some of ideas she plays with in the middle of the book. To fault the book too heavily for this might be to ignore what Russell has succeeded in creating: the vivid culture of family, the unraveling of economic and natural terrors, all within an uneasy weave of realities.