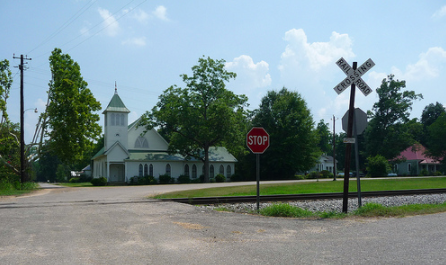 By JASON TUCKER
Your mother and I were made in places that will never be your place. Northern she and Southern I are about to start raising an Upper Midwestern you. At least while these jobs hold out.

I get hung up on all the things you’ll have and all the things you won’t in one place or another: which murky histories will conspire to give you which habits; which rules of which people will fence the limits of the world you’re capable of dreaming.

Places give you more than somewhere to live; they give you somebody to be. Even if you refuse the gifts, they all leave you carrying something.

When you meet your only grandfather left living, you’ll understand he didn’t really belong to the place of his raising—not like you’d expect. He didn’t interrupt other people’s lives. Never went to church. Never acted on public issues. Minded his own damn business. He wasn’t so much a citizen of Perry County or Alabama, even though the only thing holding the whole state together is its contradictions. He never considered himself a citizen of anything but his own property.

He’d hold out a hand—hard as a knot of lightered pine, hanging his fingers as loose as they’d go—and move it in a small circle over the kitchen table to indicate our surrounding woods and the few acres he’d cleared out to live on. Yeah, he talked about white folks like we were them, and he talked about “niggers and Mexicans” like they were made out of something else, even if they were made here, but to tell you the truth, I can’t think of more than a couple of people whose company he could stand at all. He didn’t have the kinship of farm-family or the fellowship of the United Mine Workers like my mother’s people. There were never ancestral lands or grand traditions, and so the only thing to defend was whatever property you could claim for yourself. Daddy’s more the frontier homesteader type, the type you think of when you think about the West. That makes sense. Way back when a Tucker first came to Perry County, this was the West. 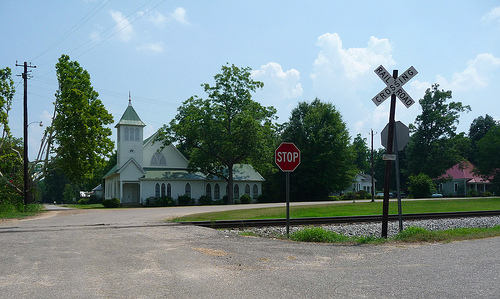 I’ve decided the tension between two things defines that place. Conformity here is the pressure that loose collections of people put on each other to think and live the same. Cussedness is a distinctly Southern backlash to that—the entirely individualistic impulse to tell everybody, “get off my land and go fuck yourself.”

Daddy worked at a small auto body shop for years until his paychecks started bouncing. Then he built his own shop behind the house he and Mama have lived in since I was three. He keeps extra “No Trespassing” signs.

Mama followed Daddy to Marion and stayed out of work until I started school. Then she got a job at the state liquor store. Since agriculture collapsed and manufacturing didn’t have far to fall anyway, government, oddly, is the biggest boss here. Together, they stayed out of politics and kept improving the house and beating back the wilderness in the evenings and on the weekends.

I loved our place. Even though there were so many sharp and hostile things, it was a proud intimacy to know snagging briars, to notice and avoid poisonous things, to trick the uninitiated to tasting a wild green persimmon, to share territory with all four of the continent’s poisonous snake species, to rank insects on a scale of the pain they could cause, to know the relief of walking barefoot out in the open ground of tall thistles and sand spurs and wild Cherokee rose and into the soft, damp needle carpet under the loblolly pines. Deer, turkey, red foxes, barred owls, and other wild things made the place seem fuller on the rare days they’d reveal themselves. I also loved my Nintendo and my comic books and the air conditioner.

I remember walking in the one-acre garden, carrying a sack of seed corn too big for me. At merciful sundown, the hot pain draining from the air and settling into warm exhaustion, the heavy dark smell of new-plowed ground, the riot-loud smells of all the wild plants already so violently alive, the thick carpet of insect noise, the hum of the distant air conditioner, the dog patrolling for snakes and other dangers, out in the hardwoods a single whippoorwill hollering something that sounded the opposite of lonesome, it felt like world enough to keep anybody alive.

Then when I was about thirteen, I came near a misty-eyed rage and said to Mama, in Daddy’s hearing, that I wanted something better than working on cars for a living. People and jobs had been slowly leaving. A lot of life seemed to be retreating. Restaurants closed. The hospital closed. The barber died.

I also said I didn’t want to go to war and die for no goddamn reason other than the want of other work. When I got older, Daddy said that if you do something well enough, people will come to you. That was the optimistic side of his cussed side. It also lined up with his desire to never leave the small territory of his control. I wanted a lot more control over myself than I could get there. He could respect that.

For thirty years, Mama’s been waiting on him to retire so they can move back near what’s left of her family forty miles north—forty miles over a personal border between the edge of derelict plantation country to the start of coal country. She goes to church, but mostly because other people are there. She helps in the nursery while the rest are in the pews getting sermonized. I’ve seen her get so lonesome she could cry. She’d name the song sometimes when she’d try to laugh about it.

For a while, they watched a family of red foxes that took up on the place. Then we had things to talk about. Daddy shot squirrels for them. Then he bought them dog food. They played in his sprinkler. When the kits got grown, they all left.

If we lived there, despite people still there to love, I’d worry about the distant hospital, the schools, the water, all the missing and broken things, and I’d worry about you. How terrible I’d feel to hear “nigger” come out of your little-girl mouth, as it eventually would. And I don’t like the Jesus they’ve got down there. He’s not so nice. It’s easier to hide you from him up here.

I’d worry how crazy you’d go, like we can all go, in such solitude that we forget there are other people in the world, that you being alive matters even if nobody and no Jesus is watching, that the whippoorwill isn’t actually thinking about you.

I hope it’s true that the more borders you cross, the more can choose what to carry and what to throw away. As long as we remain itinerant teachers, raising you to feel owned by no particular region, I hope you’ll be made into a broader kind of American, maybe even a global citizen. I can say these things now, before you’re born, while we can persist in the illusion that we can choose things for you.

I look forward to you adopting some of this Midwestern sincerity and earnest courtesy. But there are things this place can’t give you. It’s southern conformity I want to keep you from. It’s a little of that southern cussedness I’d want you to take—the defiance of just about anybody who wants you to do just about anything.

You’ll be a child. I expect you’ll take to that pretty well. It will charm me. It will horrify me. Don’t worry about me. Just don’t lose it later.

Be a wild civilized thing. Be a cussed nurturer. Be the best of all our contradictions, and know that when we include your wondrous mother, this isn’t the half of them. May your first words not be “Mama” and “Daddy” and “princess.” Say “newspaper.” Say “Telecaster.” Say “whippoorwill.” Say “screwdriver.” Say “vote.”

It’s okay if your first word calls the dog. Your Mama was the same way.

Of course, this is just a start. We haven’t even started about her side. It’s complicated and sad and wonderful too. Tomorrow night. I promise.

Jason Tucker received an MFA in nonfiction from Ohio State University and currently teaches writing at the University of Wisconsin in Eau Claire, where he lives with his wife and partner in writing and teaching, Amy Monticello.