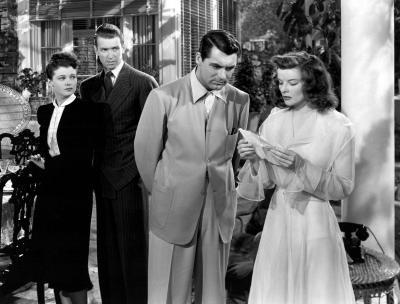 And yet there’s something at once unique and familiar about The Philadelphia Story and other films of the era. When someone speaks in a quick patter, with a sideways quirk of the mouth, we recognize the accent of Golden Age cinema as certainly as we would our own hometown drawl. These films show a land of greyscale parlors crowded with lace and knickknacks. Night brings music; vowels and lighting alike are softened; champagne flows freely. These endless drawing rooms are populated by men with slicked hair and double-breasted suits accompanying women in high heels and cocked hats. These characters are wedded to this invented place—it feels as if they would crumble to ash if brought into the “real” world. But from the other direction, from the viewer’s point of view, the barrier is reassuringly permeable; I’ve never watched The Philadelphia Story without feeling actively welcomed into its world.

As I see them, The Philadelphia Story and films like it are a lesson to writers in creating place rather than simply reporting on it. Although it bypasses Philadelphia’s actual local flavor, the film is a loving portrait of the imagined space of the Golden Age screen—with its own ethos, accent, history, and regional customs. It is, as Tracy Lord notes, “our place,” existing only in fiction and yet real enough that the viewer can have deeply felt experiences there—can be almost nostalgic for it. 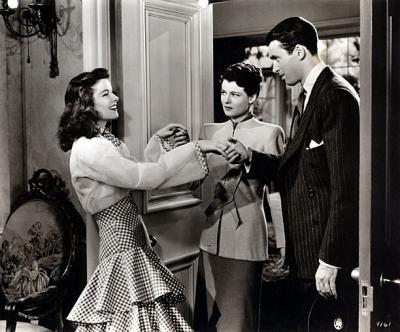 It strikes me that the vibrant and moving use of place in any work of fiction is at least partially dreamed up this way. In “Flood Control,” my goal was to evoke the spirit of a WPA-era Montana shantytown—an effort in which period research, though invaluable, could only get me so far. Even if I had walked the dirt tracks of 1936 Fort Peck myself, doing so would have been less than half the battle. The Philadelphia Story reminds us—and it’s worth remembering—that in privileging place in our writing, we commit to something rather more, or at least different, than straight journalism. We commit to evoking, for the reader and in ourselves, homesickness for an imagined world.

Olivia Wolfgang-Smith is the author of “Flood Control” in The Common’s Summer Fiction 2012 issue.

Photos from The Philadelphia Story