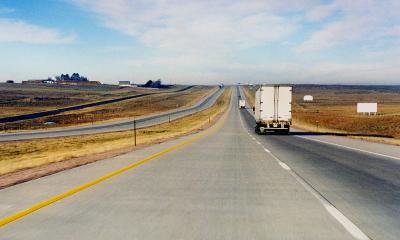 Four days a week, I drive the fifty miles between Omaha and Lincoln on Interstate 80, a line of pavement that stretches across the entire country, from Teaneck, New Jersey, to San Francisco. In Nebraska, the interstate follows the old Oregon Trail the early settlers bumped along in their horse-drawn wagons filled with household goods that shifted and creaked as wheels churned over the uneven ground.

Fields roll away on either side of the road. For much of the drive, the tallest structures are grain elevators with their rounded columns and water tanks supported by steel poles. As I pass the farmhouse just beyond the weigh station, I always check to see if the little black calf and the three white goats are grazing in the yard.

East of the Platte River, the lighthouse of Linoma Beach pokes its tower above the trees. 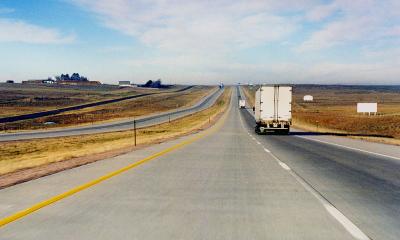 More than fifty years ago, my father helped build the Interstate on either side of the Platte. He did some surveying; he pounded stakes into the ground; he helped tear out weeds–buffalo grass, milkweed, wild marijuana–growing where the asphalt would be laid.

Now he’s almost eighty. He’s become increasingly absent-minded. He forgets things he knew the previous day, such as the fact I have a dog. He’s met the dog, he’s called her by name, and moments after he scratches her ears, her existence slips from his memory. He has to be reminded. He has problems with cars: he’ll leave headlights on overnight and kill the battery. Two months ago, he parked in the lot of Gateway Shopping Center, went into Penny’s, and, once inside, forgot what he’d gone to buy. He left the store and couldn’t remember where he parked. He walked home—five or six miles—and told my mother he’d lost the car.

After that, my mother curtailed his driving privileges. He can still drive in town—going on specific errands to specific stores—but not on Cornhusker Highway and definitely not on the Interstate. So, in the early weeks of spring, I bring him news of the road.

He nods. Gas is always cheaper closer to Omaha, he says.

I describe how this morning’s rain was so heavy that it left water standing in the ditches on either side of the interstate.

That’s good. We need the moisture.

We do need the moisture:  Last summer marked the worst drought in Nebraska since the 1930’s. By August, the Platte River had shriveled to a trickle.  Weeds sprouted in the exposed riverbed. You could tell the irrigated fields from the un-irrigated; the irrigated corn was green, the un-irrigated was brown, its leaves withering on the stalks.  The dying plants rattled in the hot wind that never seemed to cease. On the drought maps, most of Nebraska was covered with the color of old scabs, the indicator of “exceptional drought,” the worst category. In the ditches on either side of the road rose buffalo grass, switch grass, Black-eyed Susans, the familiar prairie plants that survived despite the lack of water, but by August they’d become the colors they normally turned in autumn after the first frost, already dying.

But this spring, there is rain, enough to saturate the ground and leave puddles glinting in the gullies. The Platte rises against its banks. The fields are too wet to plant, but that’s a problem the farmers, for now, gratefully accept: it’ll dry up soon enough, we tell each other. Right now, in this wet spring, we think anything is possible. It might rain more. It might rain, at the right time, all summer. We hold out hope that everything will grow and thrive. The corn crop might set new records of production. Vegetation will fill the pastures, and tomatoes in gardens will swell in their skins. This may not be the last summer my father is permitted to drive at all. This may not be the last summer he remembers my name.

Amy Knox Brown has published the story collection Three Versions of the Truth and a poetry chapbook, Advice from Household Gods.