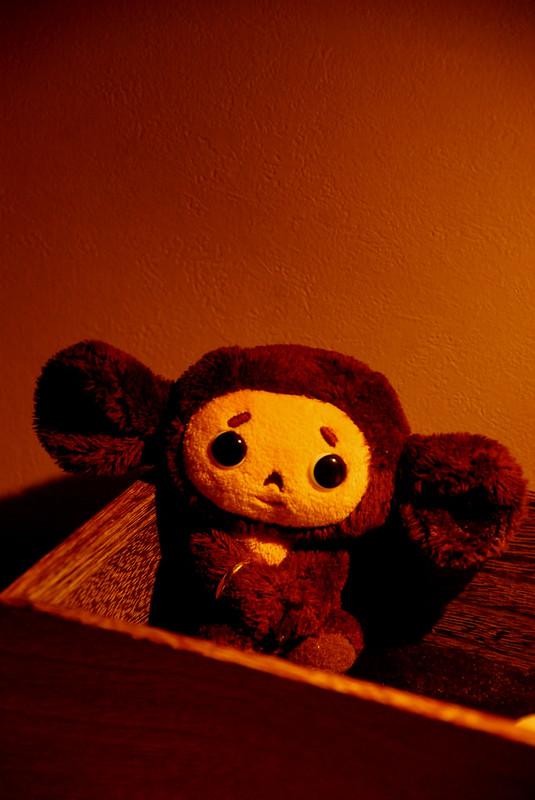 It had been fifteen years since my family left for the US, but my grandparents’ room in Gomel had not changed. I sat on the same Soviet-era sofa, holding the same replica of Cheburashka, my childhood-favorite TV character. The occasion of my visit had prompted Dedushka, my Belarusian grandpa, to take me to the village where he was born, now dilapidated, to generations of ancestors’ graves, through documents that told something of our fragmented history. One evening Dedushka donned his army uniform, and presented me with a newspaper clip detailing my father’s death. My grandmother was quiet, resigned to the shadows of old books and toys.

Dedushka began, “Your father was an army doctor when he was deployed to Chechnya. After days of fighting, he and the others were trapped in a building surrounded by snipers, searching for the right moment to evacuate several Russian men who lay bleeding.”

I stared at Cheburashka’s innocent round eyes and oversized ears. In the story of Cheburashka’s origins, a bear-like creature is found in a box of oranges. The time spent in the box has made him dizzy, and when he tumbles out he is given the name of the one who tumbles, Cheburashka. But nobody can tell what kind of animal Cheburashka is, and so he is abandoned. Rejected by a world demanding clear categories, Cheburashka eventually finds a friend in Crocodile Gena, the kind-hearted intellectual from the local zoo.

I remembered Cheburashka’s story as I listened to Dedushka and was reminded that I did not fit the box of the dutiful daughter, that I had never mourned my father, only the knowledge of what happened before he died. The military portrait my grandmother had given me lay at the bottom of a drawer.

Dedushka marched across the room in his uniform: “For several days your father’s unit waited. Finally, they decided to move. Poshli! Let’s go, your father said as he pushed the body of a wounded man toward the helicopter.”

I heard the words like a story about a stranger. The only memories I have of my father I cannot disentangle between dream and reality. One time he fetched me out of a snowdrift after I had sled down a hill into a wall of white and cold. When he saved me he only laughed—I cried. Other times we guiltily ate chocolate before dinner, always when my mom wasn’t looking. And there was a dream (was it a dream?) in which he gave me a broom and lifted me above his shoulders so that I could sweep spiders from the ceiling.

“Sniper fire sent shrapnel ricocheting off the walls toward his head. By next morning, when help arrived, both the wounded and doctor were gone.” The light of early morning was filtering through the curtains when Dedushka finished. We had been sitting there for several hours, though the story had not seemed long. But for me it was incomplete, so I pressed: “Who was the other woman my father loved?” My grandparents nodded disconcertingly. They had heard rumors.

“We did not know, we did not know,” Dedushka sighed. “But at the funeral we saw these… two women sitting by the coffin…” He broke off confused, adding that my mother should not have taken that trip to the Black Sea.

I remember afternoons spent watching my father’s lover comb the strands of her long blond hair—silk from silk. We lived in the same double-family military dorm during the early years of post-Soviet Russia. One summer my mother and I went to visit family and the beaches of the Black Sea. But the other woman stayed. “For your dad, falling in love was easy,” my mom explained.

My mother was beautiful too, her hair dark, eyes coquettish. But my father didn’t care, at least not that summer, at least not enough. Before he left for Chechnya at the age of 25, he said goodbye to my mother. I peeked between the wooden bed frame to watch her give him a polite kiss, because she already knew that whether or not he returned, they would not be together. Bud ostorojno, be careful, she said. I imagine the other woman kissed him without the same restraint.

Many years later I was still dreaming of him lifting me to sweep spiders off the ceiling. Dream enthusiasts say that one who sees spiders is an outsider. I was always an outsider to my father’s story. My mother only told me hers. She said my dad was going to leave us, but I had never heard him or the other woman he loved tell their stories. And I had never mourned my dad because I’d only mourned his plans to leave. For years I had been trying to forgive the man I only knew through others’ renderings, asking myself whether I was just another woman my father had loved, and whether I was any better than him.

In that room of the orphan doll and my father’s story, Cheburashka became a hairy blur. I had never cried for my father. Now I cried because of the women he’d loved. I cried because I was nearing the age when he died. I cried because I was the same. Since that summer with my mother on the Black Sea, I had grown up, had my own relationships, lived their bittersweet summers and mistakes. As I cried, pressed in embarrassment between my grandparents, I understood I was just the daughter of two imperfect humans, tumbling in search of a Crocodile Gena who would accept me.

Natalia Magnani is a writer and anthropology professor born in St. Petersburg, raised in New York suburbs and educated in Cambridge pubs, now residing in the Norwegian Arctic. Her prose runs parallel to her academic wanderings about memory and meaning making, and has been published in Meat for Tea: The Valley Review, Skipping Stones, The Blue Hour, Bare Essentials, and The Afterlife of Discarded Objects.