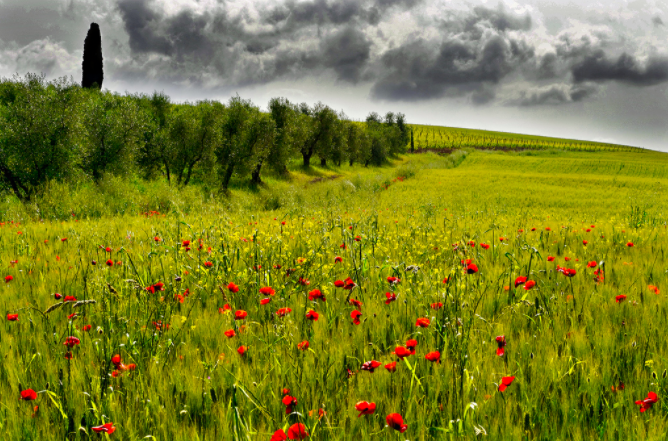 Dear Helen,
Coming down to Italy on the train from Belgium, some inspectors entered my cabin and started going through my things. They found a little packet of nutritious grasses, meant to be stirred into a glass of spring water and downed before a marathon. They said, “What is this?” I said, “Grass.” They looked at me strangely, but no Midnight Express ensued. In Florence (little like a flower, much like a hammer), I asked the shapely cappuccino-maker “Che ora tu liberatore?” which means, I found out later, not “What time are you free?” but either 1) nothing, or 2) “What time are you open?” Got a phrase book after two days of smiling and pointing. Now I speak long sentences which mean things that no one understands. Slept in a decaying vineyard first night out of Florence. Put on four pairs of pants, eight shirts, underwear over my ears. Should have brought a sleeping bag but figured I’d have a girlfriend. When I arrived in Siena, I found a field behind a condominium and slept there that night and for the next four nights. Got a bed in the Ostello della gioventu when the rain got serious. The beauty of this place would knock the stuffing out of an olive. A presto.

In Piazza Del Campo, the bricks zigzag
across the square in an exact pattern.
They have lain this way for centuries.
They do not touch each other,
but there is something between them,
something no one notices
but everyone understands.

The bond between the people of Italy is strong. They are connected by invisible strings. If they allow you into this network, you too are made strong. If you speak Italian, you have a chance to get in. I would go for a lovemaking language, but the women won’t let you woo them unless you’re part of the network of strings. Lots of young people here. But they take their personalities from the ancient walls and walk in stately manner through the streets. It’s good to see their faces not worn by care. The strings transform the terrors of life. I’ll stay a month, a year. Or leave tomorrow. Or stay forever.

Eric,
The people of Tuscany, far from being beyond description, fit nicely into the frames of language. They are content, they are brunette, they are at a becoming weight, they are polite, they are fashionable, they are asleep.

Eric,
It was a winter wonderland this morning when I got up to get up on the mic. Snowed three inches, those big wet flakes that stick to trees and cars and big-bottomed women. A festive feeling was in the air. The Italians are normally pretty subdued. I think they welcomed the chance to throw snowballs at each other. I walked around Piazza del Campo practicing the song a little and thinking about what may come.

Jock Doubleday has written plays, screenplays, country and rock songs, science-fiction and children’s stories, a manuscript of poetry, and a book on the relative safety of childbirth locales. He is presently writing a play titled Their Town, a screenplay titled Zero Hour, and a science-fiction novel titled The Songs of Nowhere. He has published other excerpts from The Ridiculous American in The Common Online.