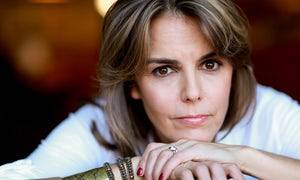 Jennifer Epstein’s new novel The Gods of Heavenly Punishment (See Review) follows her acclaimed 2008 debut, The Painter From Shanghai. Epstein, a former journalist, is also adjunct professor of writing at Columbia University. She lives in Brooklyn. We met when our children were in kindergarten together at PS 29. We began this conversation over borscht and pelmeni in a neighborhood restaurant February 21 and continued via email. An edited version follows:

Julia Lichtblau: I’ve known you for seven or eight years, but please tell the folks out in literary-magazine land how you came to be so immersed in Asia as a subject?

JCE: It started when I was a student at Amherst College. As a sophomore, I was trying to decide where to go for junior year abroad. I loved Jane Austen and other English writers and always thought I’d end up in London. My dad talked to me about rethinking that plan. He encouraged me to go someplace where I would learn a language and would challenge me. On his urging, I looked into the Japan program. Amherst has a relationship with Doshisha University in Kyoto. It was founded by an Amherst graduate in the late 1800s. I went and lived with a Japanese family my junior year. It was intense, but amazing. It made me think about how really, truly different cultures can be, how they communicate and clash.

JL: How long did you live in Asia?

JCE: Tokyo for five years and Hong Kong for two years. When I graduated, I had a degree in Asian studies. I spoke decent Japanese. I got a job reporting for Knight-Ridder Financial for two years. After that, I went to SAIS [Johns Hopkins School of Advanced International Studies].

I worked for the Wall Street Journal in Tokyo for a year. Then I got a job in television for two years in Hong Kong. That’s how I got immersed in the history and cultures of Japan and China.

I don’t think I was really done with them when I came home in ’97. One can study any country endlessly. I could have become an academic. But my first love has always been fiction and literature. I thought it would be more interesting to explore those places through story-telling.

JL: Where did this story come from? Your first book was set in China. Was this one of those novels you’ve been working up to since you started writing fiction?

JCE: I’ve known all along that I wanted to write about Japan because it was the place I’d studied the most, the place I knew the most about. But it was a little like writing a memoir. I felt I didn’t know enough before.

My husband [Michael Epstein, a documentary film-maker] kicked it off. He has been working on a film on the Haditha incident in Iraq. [In 2005,  twenty-four unarmed Iraqi civilians were shot by U.S. Marines after a Marine was killed by a roadside bomb. All charged were acquitted of manslaughter.] One of the questions that came up in an interview with a military lawyer was how do you define a war crime?

Around the time of the Tokyo firebombing, the laws surrounding the collateral killing of civilians in war were murky and fairly undefined.

Today what we did to Tokyo and and sixty-six other Japanese cities would be considered a war crime.  Technically, the stated goal was to attack the military infrastructure in Japan (which was supposed to be largely housed in civilian areas). It really was simply indiscriminate bombing of civilians with full knowledge that hundreds of thousands of those civilians would die gruesome deaths. We killed more people in three hours of firebombing than with the atomic bomb in Hiroshima. It was the first use of napalm. We used Flying Fortresses, the most advanced and largest aircraft available. And we bombed from a lower altitude, 4,000 to 8,000 feet, versus 15,000 feet or higher for the Doolittle raids. In the Doolittle raids, the accuracy was not so great. The Doolittle raids in 1943 were the first attempt at bombing Japan directly, as well as the first U.S. response to Pearl Harbor. We learned a great deal from how little damage they actually did.

When I started researching, I knew immediately this is the subject. I knew I wanted to tell the story from both sides. It was a just war in some ways, but this was not just.

JL: How did you research it?

JCE: There are a lot of accounts, first-person accounts. For example, I read The Night Tokyo Burned, by Hoito Edoin; Hiroshima, the classic New Yorker piece about the atomic bombing. [Note: The entire Aug. 31, 1946 issue of The New Yorker was devoted to one piece by John Hersey describing the bombing from the perspectives of six survivors.] I read novels, Black Rain, by Masuji Ibuse, about the Hiroshima bombing. I went to Japan and interviewed three women who survived the firebombing.

JL: How did you find them?

JCE: I had an amazing researcher, Yuko Sakata (also an MFA graduate, translator, ballet dancer, and writer), who found the Tokyo Air Raids and War Damages Center, this amazing archive center dedicated to documenting the firebombings. They have records, tried to get compensation for victims. They’re quite activist. I arranged interviews with these women. They’re in their eighties. Their life mission is to tell their stories

JL: In both your novels, your Asian protagonists have an attraction for the West. Does that make it easier to capture them?

JCE: Yes. I’m interested in where cultures connect. Even the Americans–except Cam Richards, who had never been outside the country before joining the Army–-all have cross-cultural connections.

JL: What do you think is most challenging about capturing characters from another place, another culture? What, techniques, do you feel have been most effective as a writer in doing this? What did you have to overcome?

JCE: The hardest part is giving yourself permission to do that. Certainly with The Painter From Shanghai, I felt a lot of hesitation about stepping into the personality of a 19th century Chinese prostitute. But fiction is very forgiving–not that you should abuse it—but it allows you to make assumptions about a greater truth.

Some people were outraged, though. One particular class of Chinese students wrote in response to an interview that this was an example of how Americans vulgarize everything. I think they had studied with a French woman who had written a history of Pan Yuliang they considered definitive. One quote I thought showed how they misunderstood: “Mrs Epstein: The Painter From Shanghai is a pure fiction and is not informative!”

I also had a lot of Chinese readers. A Chinese reporter, Rong Xiaoqing, who was writing for the South China Morning Post and Sing Tao newspaper interviewed me. I was very nervous, but she gave the book a generous review.

JL: You’ve often said you don’t think of yourself as a short-story writer, yet there is almost a quality of short stories to each segment. They have an autonomy to them. Do you think of them that way?

JCE: I see them more as novellas. It was an exercise for me—to try to see if I could write in a different form, with different points of view. I’d done that in an early story set in Pompeii—it was one short story where I felt I sort of succeeded.

JL: Did you always conceive of this book as structured that way or did you initially choose to have a single protagonist?

JCE: The proposal I delivered was nothing like the book. I wrote the firebombing scene first. That led me to Dugway Proving Grounds and to this Czech architect, Antonin Raymond, who built these model Japanese houses to test-bomb.

JL: In some ways, Anton Reynolds is the most surprising character in the book. He’s cold, almost amoral, yet not entirely unsympathetic.

JCE: When I found him, I said to myself that’s just crazy. He lives in Japan for 20 years, he builds the Imperial Hotel with Frank Lloyd Wright, then he comes back to the States and helps the bombing, then he went back to help rebuild. What that’s about?

I met my editor after she’d read that chapter, and she said, “That’s fascinating, but what’s he doing here?”

He felt that the war was a terrible mistake, and the Japanese had brought this on themselves. I got a sense of him as a person from papers, from his accounts. He wrote a book, Antonin Raymond: An Autobiography. He was artistic, sensitive, parts of him were almost comical. He was torn. He felt the sooner we get the war over the better.

JL: Still, he didn’t need to do that. Why would he make that decision?

JCE: One thing they didn’t understand at the time was that carpet bombing doesn’t make people surrender. Atomic bombs did. But there was no answering that.

Also I’m sure people questioned his allegiances. I would be surprised if on some level he didn’t feel he had to demonstrate his patriotism. He was a naturalized citizen. He’d lived 20 years in Japan. He was someone who really felt that he knew best.

JL: You mention in the afterword that the character Hana Kobayashi was inspired by the memoir of New York Times reporter Helen Meirs’ year in Tokyo in 1935. Can you tell us more about her book and how it influenced this character?

JCE: There was a character in her memoir that I based Hana on. The woman had gone to London with her family when her father went there with a large trading company in the late teens. The parents came back but they left her in a private boarding school for close to a decade–if not a full decade.

[Regarding Hana] Here’s a woman who had been abandoned by her parents in a London boarding school for ten years. They bring her back and think they’re going to marry her off. She is a Western woman, she has English ways, and an English accent. No one would want her.

Julia Lichtblau is Book Review Editor of The Common. Her work is forthcoming in the American Fiction 16 Prize anthology and has appeared in The American Scholar, Blackbird, The Drum, Superstition Review, Narrative, and The Florida Review, among other publications.