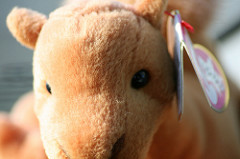 Mischka is that animal: he’s a little Russian bear less than a foot long, who used to squawk when you turned him upside down but who now only rattles, whose glass eyes have grown milky as if with cataracts, whose red sewn nose has all but rubbed off and whose faded fur is worn almost to the weave everywhere except under his arms and between his legs (a fact I found significant, somehow, as I approached adolescence). I was given him by friends of my parents when I was less than a year old, and he has been my bedmate, on and off, ever since. It’s true that he’s spent the last decade in a cloth storage bag under my bed, along with a couple of ancient but beloved sweaters I can’t part with and some infants’ clothing; but I imagine that at any time I might retrieve him from his exile and restore him to his place upon my pillow. He is not in any sense banished, and his place in my emotional firmament is secure.

Not so with Koala. I’m not sure now how much I ever liked him. Why then, you might ask, does he leer at me from the corner of the bedroom armchair, and willfully shed dusty fluff upon its elderly upholstery? Why should he see the light of day when Mischka uncomplainingly resides virtually sub terra? Koala is a more complicated creature altogether.

Koalas are, of course. They’re cute and we like to think of them as cuddly, but the one thing we know is that they aren’t at all. They’re actually quite vicious. They have sharp teeth and claws they aren’t afraid to use. They also have strangely shriveled brains, fingerprints very like humans’, and bifurcated penises. They’re marsupials, which makes them more special than bears, because bears can be found on the majority of continents and marsupials only on one.

My Koala is, of course, Australian. Australian like my childhood. We moved to Sydney when I was four and a half, and left when I was nine. For many  years—disturbingly, for most of my youth—I described that time as the happiest of my life. I can’t remember who bought me my Koala, but I know exactly where he came from: a spinning rack in the gift shop in a fancy hotel in downtown Sydney (perhaps the Hilton?). I see it perfectly in my mind’s eye, its glass walls giving onto the corner of the lobby and its lone salesperson cramped behind the little counter. When I went back to Sydney in my early twenties, I stood in that shop and remembered the sight, the touch, and the thrilling acquisition of Koala, the near-disbelief and delight when he became mine.

In spite of my initial passion, I could never love him as I ought. Not even from the first. Aside from general facts about koala brains and penises, there are relevant facts specific to my Koala. One is that he’s made of genuine kangaroo fur. That’s why he’s so soft, and that glorious red-brown color— and these were the qualities that so attracted me at first. But even when young and relatively oblivious, I was distressed to learn that Koala’s coat had previously been worn by someone else, and that someone else had died for him— and by extension, for me. Then, too, his claws are made of sharp, hard plastic. I’ve always imagined these are a good reminder of the genuine article. It was disconcerting to snuggle up close and have him reciprocate by scratching me painfully across the collarbone. But his fatal flaw pertains to his form: Koala is a puppet. His head is disproportionately large—in fact, you could say he’s all head—and his body a flat sock of kangaroo hide. Those nasty claws await human animation. That head is unyielding—not at all what you’d expect from the goofy expression of his widely spaced eyes—and his body limp. You hug him and there’s nothing there.

There was a period around the age of eleven or twelve—by which time we lived in Toronto—when I kept a lot of stuffed animals piled on my bed.  I worried about moving them at bedtime, but ultimately there wasn’t room for all of us. Koala, like Mischka, then spent much of his time on my pillow; but only Mischka stayed all night. Then my parents moved to Connecticut and I went off to boarding school and initially not even Mischka came with me, because  I wasn’t sure that it was acceptable for teenagers, and more specifically  American teenagers, to have stuffed animals.

Coming to the United States from Canada, I had many anxieties about how to belong, and didn’t want to be caught in bed with a shaming plush creature.

In my parents’ new house, the animals largely stayed under the eaves in cardboard boxes with my name on them. Mischka escaped, and sat on a shelf in my room, or in a drawer in my dresser, or sometimes on my pillow, in the years that followed. But Koala did not merit a thought.

At some point after I finished college, my parents asked that I do some culling of those boxes. (My sister, whose sentimentality far outstrips mine, simply claimed the boxes of her childhood and carted them around the world with her. In Moscow, years later, her children played with her dolls and read her books when they were small. Her big honey-colored French bear, Nounours, whose head fell off quite dramatically and had to be re-stitched, sleeps on my niece’s bed to this day.) I threw out a lot of things, although I don’t remember what; but apparently Koala survived in the smaller, more compact re-packing; and was thus eventually shipped back up to my parents’ country house in Canada. He came out of his box there, but barely: into a cupboard with old skates and my mother’s peau de soie wedding dress and some threadbare quilts wrapped in dry cleaners’ plastic. We gathered in that house for holidays—so many squabbles, so many tears, and even a few good times—over years I barely realized were passing. I was an adult; then I was married; then I had children of my own; and time seemed the way clouds look when you see them from the airplane window, fluffy and insubstantial and always the same.

Here’s the thing: it wasn’t. It took us a long while to notice: the faltering, then the unraveling, were so incremental. By the time we knew we’d reached the point of no return, we were well past it. These were the years we didn’t go to the house at all, and I thought of it as the Ramsays’ place in To the Lighthouse. I remembered the shawl wrapped around the boar’s skull, and wondered what was coming undone while we were away. Through it all, Koala lurked in the cupboard with his eyes wide open.

After my father almost died, and when we all knew it wouldn’t be so long until he did die (but before we knew what would kill him), we took my parents up to the house. None of us acknowledged that it was the last time he would go. He was enormously courageous. It was hard work. He insisted upon sleeping in his bed, but negotiating the stairs was, as Martin Amis has written of his own father’s manoeuvering, a work of colossal administration. When we were leaving, my father wouldn’t let us throw out the food in the refrigerator: “We’ll be back very soon,” he said, “we’ll be back before Christmas.”

Two years later, when he was dead and my mother dying—a tentative but elegant husk of herself, her sweet smile vacant—we returned north a penultimate time to say good-bye, to pack up what could be salvaged from our abandoned history. The dismantling of the house—a house I never liked, mind you—remains for me an agony for which there are no words.

What ended up in my care is like flotsam after the tsunami. Much of it has no explanation (why my grandmother’s hideous stained glass gnome, but not the collection of Beatrix Potters? Why my father’s school notebooks but not the copper pots?), but simply by surviving, it has become important.

Otherwise, my past is gone from this earth. These are the fragments I have shored against my ruin. Their significance is simply that they are here. Like the Roman coins in glass cases at the museum: they aren’t necessarily the finest, but they are what has endured.

My prickly, unsatisfying Koala is, like the stained glass gnome, a marker of what once was. For all those years, I didn’t miss him; and now, moth-eaten,  he lies disintegrating on the armchair, eyeing me in his foolish way, his enormous chin upon his sunken breast, more dismaying and less loveable than ever he was. But I cannot throw him away. Not yet.

And I worry: what will it mean when I can?

Claire Messud is the author of the novels The Woman Upstairs, The Emperor’s Children, and When the World Was Steady.