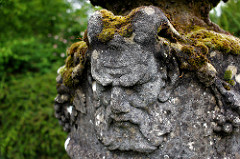 Had a kind of tabloid curiosity and mean prurient desire
to hear the very worst. Make the blind man tell us everything
They said as one—for of course they were a chorus—make him
spill his guts about his mother-fucking patricidal brother-sister
Fathering accomplished from the very womb that bore him.

Make him tell us how the goo of his eyes smelled like vile jelly
running from the brooch he used to gouge them on his thumbs
And palms, and make him tell us why his swollen pierced ankles
never healed once the king he’d murder one day (& he’s done it now)
Left him on a hillside outside Thebes and what it’s like to stumble

As an exile place to place and why he wishes he were never born.
Sophocles himself was born at K.H.—the Horse Hill Rider’s
Riding place—& not Agora Hill (kolonos agorias) in Athens proper
out of which came Theseus to chastise the old men in the chorus
And at last to organize the rescue of Antigone (there beside

Her father!) who’d be briefly caught and kidnapped soon
by Creon and a group of louts. Tell us all the dirt on Oedipus
Shouted the old men; we’ll put it in our paper, put it on T.V.
Easy, Geezers, warned the noble Theseus; we can have you all
Arrested well before your kommos—that’s your dialogue that’s coming

With the Tragic Hero in a meter that I never learned to scan
in school. Anyway, you’ll all end up as Roman property and bound
To the soil that you think you’re so in love with by about AD 300
or in a 1950s working-class ghetto high-rise served by Hellenic
Railways, which will never whisk you out of there, and accessible

From Avenue Konstantinopoulos just in case some literary scholar
might come visit. Let me know then how it feels.
It may feel better not to have been born, but I anticipate a bit like
Old Tireseus. Try us at our web site: [email protected]
That’s an oracle you might well consult from time to time.

It will tell you that your sacred grove is a polluted slum where
nightingales don’t sing, there’s no laurel blossoming, no olives offered
By Athena to the riders of Poseidon’s horses flashing eyes and sparking
hoofs off paving stone. But never mind. Your editor himself insists
That the author of your most famous version lies buried somewhere

With good peace right after a convincing victory in bad times
but because he hosted once a doctor called Asclepius, gave him just
Exactly what you can’t or won’t provide—the wine & olives, lamb & peppers,
fresh fruit and (why not) a pretty girl, or (why not) a boy.
Anyway, Asclepius fucked the girl or boy or both and drank the wine

And ate the olives and the lamb, the peppers and the fresh fruit
and ended up Director of the most corrupt insurance scam in Athens,
Old geezers treated for the same thing—impotence—no matter what was
wrong with them and any sweet young thing appearing in the ER
Complaining of desire sent upstairs at once to see the CEO.

But on with it. He’s still got Polynices yet to deal with, and Creon too.
Do the kommos and return the whole proceedings to your sponsor:
Everybody wants a piece of him, his body for a blessing in whatever earth.
And yet he’ll seem according to the Messenger’s last speech more
Like mist evaporating off the sea in sunlight: Kind of up and disappeared,

He’ll say. He like I mean seemed to vanish then and there while thundered
Zeus and howled Antigone a lot and beat her breasts and wailed like
And walked around in circles saying sorry Oh she’d lost it to photographers,
and he himself just nothing of a sudden just a nothing suddenly and he was
Gone man and nowhere when he’d just before been right there and then.

But before that magic, this: The dreaded kommos and the who who who
are you before the owl of Athena on its bough and I am Oedipus and
Aoiiiii please the gods not him and yes the final ordure of all outrage
swellfoot father of my sister I am he you loathe and who men have
Called pierceankle angle-prized and angel-priced I will be but what you

Make of it when nobody looks for me and nobody asks my poisoned name.