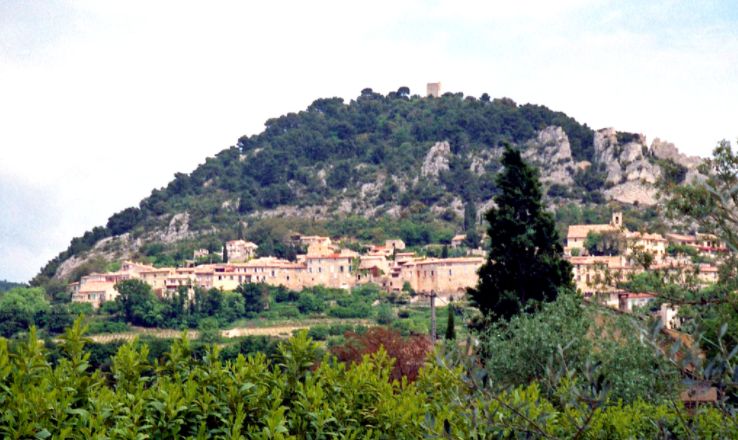 David and I leave our children, thirteen and ten, watching television in our rented house in Barjac, a village in southern France, to go hiking. They often fight like scorpions in a jar, but are best friends right now. “Bye,” they wave, eyes screen-ward. We don’t expect to be long. But after ten days of family vacation, we crave time alone together.

Summer’s at its ripest, an oozing, cracked tomato. Sumptuous white light drenches everything as we drive out of town. A recent storm left a presentiment of autumn cool that cuts through the afternoon heat. Les aoûtiens, French August vacationers, are back at work and school. We Americans have an extra week.

We park below a hamlet and climb ancient steps to the church, whose garden overlooks the meandering Cèze River and checkerboard fields of sunflowers. Their faces, brown and hangdog, no longer turn sunward, belying their French name, tournesol. We descend, poaching yellow figs with magenta centers from overhanging trees. Blazes mark a trail between lichened walls, which we take. It goes up hill and down dale, through a wood of live oaks, and eventually leads to a tunnel formed by a dense mass of arching black branches. They are thin and whip-like, almost leafless, a plant we don’t recognize. From inside, we see only indications of the trees beyond. Add thorns and an ability to crunch intruders, and this tunnel could be a prince’s last ordeal before reaching his enchanted beauty.

We emerge onto a beach of round stones sloping to a green pool, gold-edged like an enamel bowl, facing a white, limestone cliff. The Cèze. We’re wearing swimsuits under our clothes. David takes his off, daring me to do the same. I decline, but then change my mind. We’ve seen no one since some workmen near town. I slip my suit off underwater, leaving it within reach, and join little black fish swarming David. When he realizes I’m naked, he laughs, kisses me. I explore the pool until he shouts a warning. A man with a dog. While I wrestle my suit on, he disappears into the woods. Quelle discrétion.

The river’s much colder since the storm. We emerge, dress, and re-enter the tunnel, laughing about what the kids would say if they knew their parents went skinny-dipping and almost got caught. David’s five yards ahead.

An unseen animal rustles and thumps in the leaves beyond the branches. A squirrel or rabbit? Then I hear a low, feral growl. “Did you hear that?”

We keep walking. A second growl, louder. A clear warning. It sounds like some sort of wild cat, which is absurd. There can’t possibly be dangerous carnivores in this region, which has been farmed for more than a thousand years. But it would be stupid not to take that growl at face value. We turn back. “Don’t run,” I whisper.

Once at a dinner, a friend of a friend proudly recounted an Amazon vacation where he encountered leeches, tarantulas, piranhas. “That’s why I like the south of France,” I said, which got a big laugh. That’s my idea of a vacation. Excellent food, history, art, scenery, and zero chance of encountering nature in the raw, though we did find two tiny scorpions in our Barjac house. We put them in a butter dish, where one ate the other. Maybe it’s that I came late to some important things (marriage, children, writing) and have too much left to do to risk an early, gruesome death for a frisson. Or maybe I’m chicken.

Back on the beach, we reconnoitre. Our phones don’t work. The hiking map shows no other path out. The left bank’s densely overgrown. The cliff ends in trackless woods, according to the map. The river’s shallow ahead. Maybe we can wade to safety. We squelch along, but the water deepens rapidly. There must be an alternative to swimming out. This is the south of France, not Amazonia. I think of the kids, getting hungry and irritable in front of the tube.

Forty thousand years ago, woolly mammoths, rhinos, lions, and bears roamed this part of France, the northern Gard. The Grottes-Chauvet, which contain among the most fantastic prehistoric paintings discovered, are a few kilometers away. Cro-Magnon man killed these monstrous beasts with stone arrows and spears. Today, homo gallicushunts for sanglier (boar), in the fields using beaters in traffic-orange vests to flush them out. The cars line country roads early on weekend mornings. Alternatively, you can get your boar already ground and stuffed into saucissons from a charcutier at Barjac’s market, who ropes in customers with bawdy songs and dirty jokes, samples and un petit coup de rouge. The only animals I have ever killed for food are lobsters whose claws are immobilized with elastics.

We reconsider the tunnel. Maybe whatever-it-is has left. Peering into the murky opening, we lose our nerve again.

Back on the beach, we see a man wading toward us. Like the proverbial silent native, he doesn’t acknowledge us, but walks up the bank and into the supposedly impenetrable woods. We splash to where he disappeared. The “woods” are a band of old trees between the riverbank and fields. Sure enough, there’s a path, which farmers, lacking a road, use to move between fields.

A half-hour later, we ford the river on stepping-stones below the village and regain our car.

“You’ll never guess what happened,” we say to the kids, when we get home. We tell them about the mysterious growl, the faulty map, the secret road, trying to convey our fear to them.

“Cool,” says Gabriel. They turn back to the TV.

Julia Lichtblau’s work is forthcoming in the American Fiction 16 Prize anthology and has appeared The American Scholar, Blackbird, The Drum, Superstition Review, Narrative, and The Florida Review, among other publications. She was a finalist for the Fall 2016 Narrative contest, one of two finalists for the 2015 Kore Press Short Fiction Contest, and twice finalist for the American Fiction Prize. She is the Book Reviews Editor for The Common, and covered international finance in New York and Paris for BusinessWeek and Dow Jones Newswires for 15 years. She has an MFA in Fiction from Bennington College and lives in Brooklyn, N.Y.