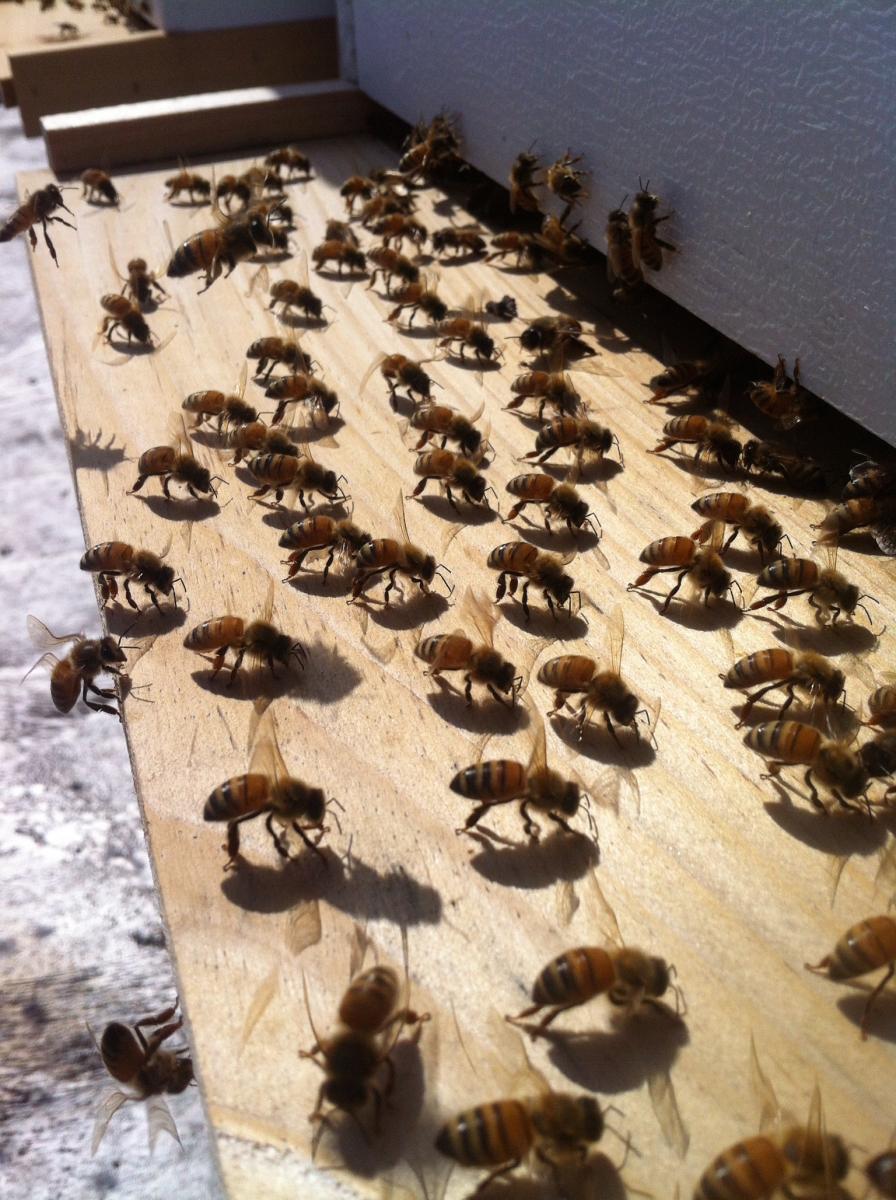 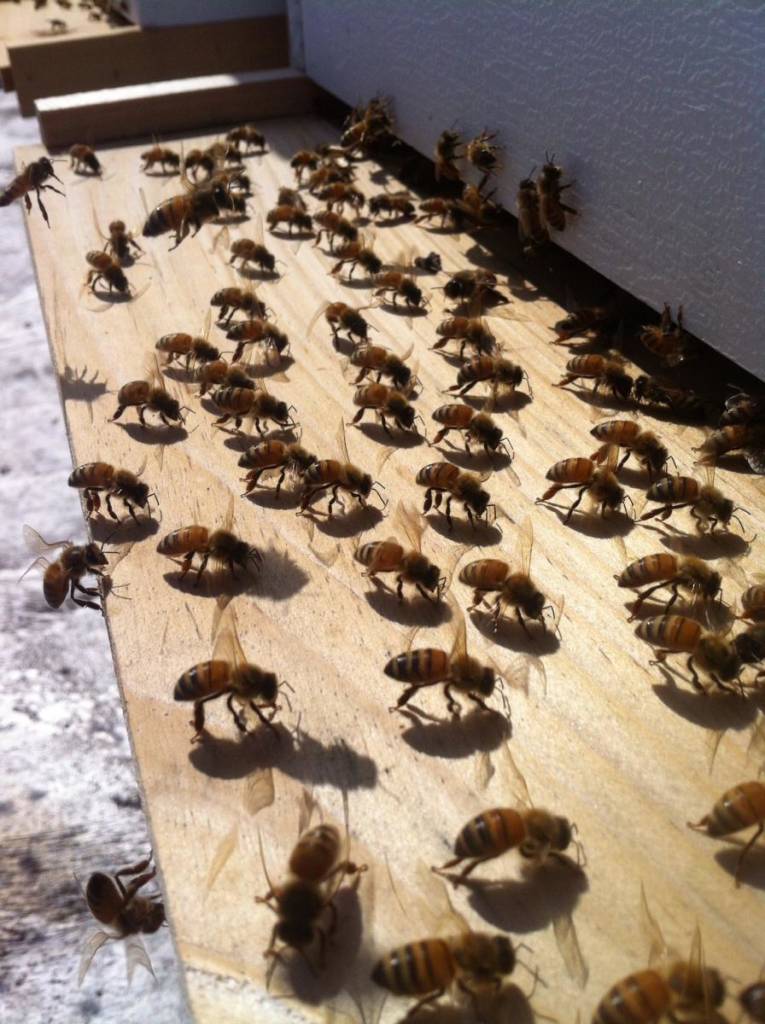 We lost a hive this winter. We’d set our two hives facing south on the roof of our Brooklyn home for maximum sunlight, knowing that in winter that would translate into maximum exposure to wind and cold as well. My wife, Hali, and our beekeeping consultant, Davin, dutifully taped up the cracks with red duct tape so that the bees would expend less energy over January and February with their self-composed heating system. Generally they cluster around the queen, vibrating their wings and shivering to keep her and themselves warm. It was a harsh winter in Brooklyn, however, and we’d gone up to the roof several times in December to check to see whether the hives were healthy. Both of them seemed okay, the workers’ little furry heads crawling up over the tops of the frames or buried head-first into the pale, hexagonal wax cells. Normally, when you open a hive, even in winter, you are struck by the chaos, the thousands of glinting bodies nosing and circulating, and the sharp hive smell that combines sweetness and sourness in equal proportions.

I have a friend who, to gauge the relative health of one of her hives, simply puts her ear against one of the walls and listens to the hum enlaced with tiny little clicks, rather than, more crudely, opening up the top and checking to see the dark mass of insects well up, as we often do. This practice of hers, for she is a very experienced beekeeper, reminds me of the way a knowing parent can, after a time, tell the health of her child by pressing her lips against his forehead.

In truth, when one starts to keep bees one knows that failure to thrive is a possibility, just as when one starts a family — that deepest fear is the same. One fears it and puts that knowledge away, knowing that one would not be able to go on should that kind of terror happen, but still knowing that it does, sometimes. It makes you watchful, and it makes you stronger, in a way, because you learn how to cradle that fear in a place where it won’t harm or disable you. In the case of bees, one can be more pioneer about it. Should you lose a hive or two, you know that you can just start one or two more and shoulder on. Still, the deep hurt and the wondering why remains.

For five years, we’d kept the frames and relevant equipment for beehives in our basement. Finally, it had just seemed time to start. And once you have raised and tended bees, the sensations and smells, your palms against the rough wood as you lift, the weight of the honey, the hot sun against the whitewash, the pattern of the insects going about their work, invests your life, sinks in like tar in your hands.
Hive B had always been the runt, the hesitant one. Its workers perched in smaller ranks to fly out from the tray in front. Its queen was smaller, almost invisible among the boiling drones. When we harvested honey from the two, carefully lifting off the top two cases and lifting out the frames one by one, and sliding them into a cooler, the more aggressive bees went something like berserk and began attacking each other, as well as us. This behavior is unusual, though not unheard of. Bees go by pheromones and other scent signals: perhaps we had inadvertently crushed a bee or two, it’s impossible not to as you slide off the lids and step among them. Perhaps the smell of honey dripping down the slashed frames had set the insects off. In any case, the laden odors of the moment went to their heads the way, in Iceland in ancient times, the scent of blood in battle combined with the smell of crushed nettles and sage drove some Vikings to a slashing frenzy. The bees took to the air, thickening and enlivening it, filling our ears with an ominous buzz, swarming the frames we had stolen (though we’d left more than enough honey for their winter), pelting our faces with their light bodies and trying to squirm through gaps in our clothes in a suicidal quest to get through to our flesh to sting us. But our protective suits held them off, and we went about our business with what must have seemed to the bees to be the indifference of plumbers, filling the two plastic coolers and loading them down the small roof hatchway. When we came back the next morning there was a four-inch thick patch of dead bees on the asphalt of the roof. Failing to reach us, their honey thieves, the two armies had gone after each other, and in a case of internecine warfare, Hive B had been the loser. And we thought, twenty thousand sentient beings senselessly killed, twenty thousand souls fled.

Still, both hives seemed fine by January. We congratulated ourselves on the good job, spun out the honey into buckets and pooled those into jars. Hali melted the leftover wax into a balm. When we checked on the bees in March, Hive A was buzzing along happily as before, its frames still filled with dark honey, its weight heavy and portentous. But now in Hive B there was stillness, the cold feeling you get walking into an empty house, the smell no longer sweet, only sour and dank.

That hollow place is embedded in our thoughts. And yet: new fresh wood hives, smelling of resin and wood dust, are spread out on a ping pong table, ready to be whitewashed. We will have four on the roof this year.

Peter von Ziegesar is a writer and filmmaker who makes his home in Brooklyn with his wife Hali Lee and their three kids. His memoir, The Looking Glass Brother, was published in May by Picador Press.