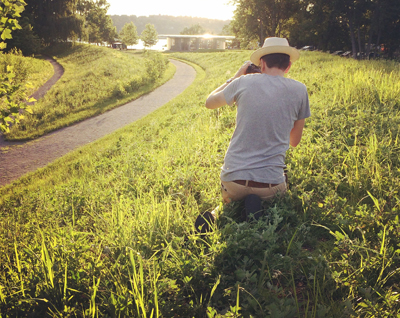 We were back in the Hudson Valley, in the marvelous town of Beacon, to make some images of a new park on the solstice. I found Brooklyn photographer James Ewing stalking the faint pre-dawn, about 5:15AM. A golden haze that had built behind the Hudson Highlands, in an instant, crested over to illuminate this little riverfront peninsula. We scrambled to make the most of the sun, searching out the best views, the right moments. The whole Saturday passed this way, really, though with less urgency than those first minutes. All across Beacon’s Long Dock Park, in a bit of solar sport, we either laid traps ahead of or chased just behind the light.

About the land itself, first. One hundred years ago, the railroad chose to stage boxcars onto barges to take them to Newburgh, New York. So they filled basalt boulders into the Hudson River to make a wedge of land upon which to build a rail spur. A couple decades later, there were no more barges, no more boxcars. Some of the tracks came up, to build a waypoint for trains between New York City and Poughkeepsie. Coal and petrochemicals stored there waited out blizzards, spring floods, even hurricanes. There’s no way to date the spill (or spills) that contaminated the part of Long Dock now fenced off from public use. Beyond a wire fence enclosing the northwestern edge of the park, phytoremediation is at work, breaking down the contaminant in the soils. Given enough time, the right plants will decompose almost anything, heavy metals being the only exception. In most cases, sadly, the amount of time required isn’t in human scale. Long Dock Park won’t be fully safe for a generation. 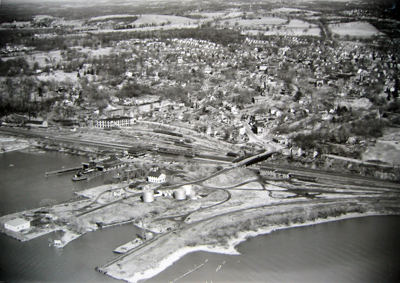 The Hudson River’s estuarial scour hollowed a cove into the old dockland. Now it’s lined with river rock to make a stone beach, where a kayak pavilion outfits boats to the general public. So few places in the Hudson Valley offer the chance to approach the River, to touch its edges, let alone enter the water. A regional land trust called Scenic Hudson initiated Long Dock’s rescue in 2002 with the goal of furnishing such a waterfront destination.

Lining Long Dock’s southern edge are a number of rugged trees, survivors of the bad old days, among them a majestically bent willow. Its boughs drape the innermost of three concentric landform berms that scissor the park’s trail system. These big crescent shapes, about triple adult height, allude to the geologic scale of the river and the weather-smoothed Hudson Highlands. Between them and the river, newly planted ground cover diversifies the scale. Two large tidal marshes formalize the periodic flooding from the Hudson. 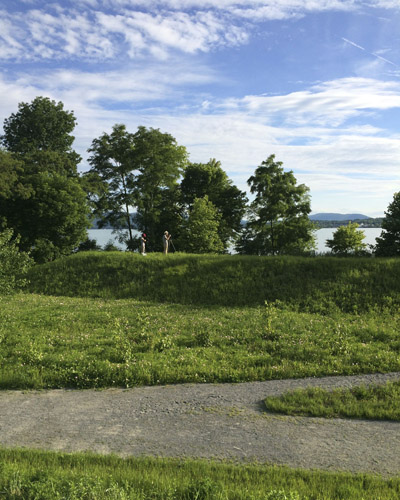 James spent the day’s final hour shooting into sunset. The trees backlit, the shining corrugated aluminum of the kayak pavilion, the sky reflecting from the river. We discussed the sorrows of lens flare in photography, how it’s everywhere now in bad architectural renderings. In the day’s final image, taken atop one of the crescent landforms, James captures two women walking toward the camera, between the landforms. The sun reached down the trail after them. Then the shoot was finished.

What kind of place is Beacon’s Long Dock Park? Its story is a metamorphosis, from gritty infrastructure to anthropogenic work of nature. How do we perceive this application of designed biological and chemical phenomena? Could a Tintern Abbeyor Walden arise today to unpack our rehabilitated or reinvented natural environments?

The next weekend, James and I were both in the Berkshires, in Williamstown. ForArchitectural Record, James was shooting the newly expanded Clark Art Institute just ahead of its July 4 debut. This small museum owns celebrated works from the late-nineteenth- and early-twentieth-century artists plus a number of Renaissance works. Its mission is evolving to include contemporary works as well. A unifying theme across the Clark’s holdings is the representation of nature and landscape—appropriate for a museum located on 140 acres of pastoral Berkshires land. Until this project, though, no actual connection between the galleries and the lands existed. Pritzker-winner Tadao Ando, commissioned to create The Clark’s new architecture, conceived of a Visitor Education and Conference Center building beside an enormous reflecting pool—to mirror views up into the wetlands, meadows, and hillsides. Ando’s architecture, a linear geometry of creamy concrete, granite, steel, and glass, is a viewfinder for the lands.

It’s a landscape that has been subtly but extensively redesigned. Over two miles of trails have been created, running pedestrian paths around the property. One thousand trees have arrived. Invasive plants are eliminated. With eyes trained by paintings, you gaze out at the landscape. You might say that the Clark is more Berkshires than the Berkshires. 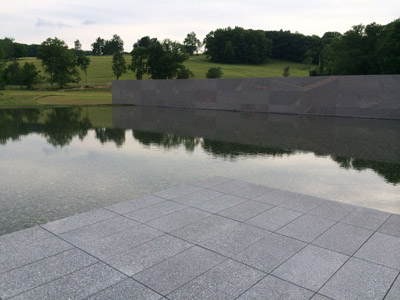 About the reflecting pools. By appearance, they belong to the world of the Clark’s architecture, and only through optical illusion do they participate in the landscape. But there’s more. Although the Clark’s press fact sheet cites that the design is still being evaluated, the pools are sutured to the natural watercourses above and below ground running down from the hills. They return gray water to the Clark’s buildings, a feature designed to achieve a 50% reduction in water consumption. So actually it’s possible to think of the museum’s buildings as extensions of the landscape.

In truth, sustainability and ecological sensitivity are the forces driving the designs of Long Dock and the Clark. Each project must also broker a complex, preexisting relationship to nature, too. I doubt their architects or landscape architects share my feelings that something strange is unfolding in these projects, the neutral but peculiar sense of an emerging nature, a design nature. We are fortunate today to be able to seize beautiful, high-resolution images of our present world, even as it changes everywhere around us. We’ll likely wonder over them in the future, I think. 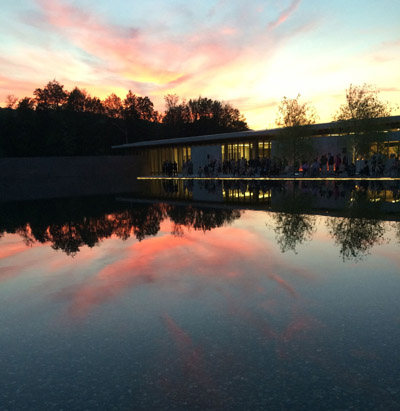 James Ewing’s images from the Clark Art Institute are due to appear in the August issue of Architectural Record.