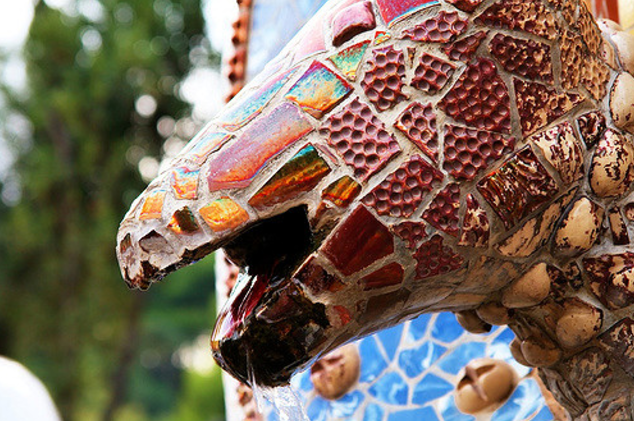 Even so, and despite walking past the most rococo electrical station in the world, I’m still unprepared for the bright majolica fruit on the candy-cane-like arch of the Arc de Triomf – surprised by the sheer architectural folly of it. I’m back in Barcelona, the fanciful city I love.

This is the public face of the city, the one that draws visitors from the rest of Europe and the world. Few tourists notice Barcelona’s darker side, the secrets held in the dank stone of its more ancient buildings. The depiction of some of the city’s gloomier neighborhoods, its darker history, was one of the secret pleasures of Carlos Ruiz Zafon’s breakaway hit The Shadow of the Wind. But even that neo-gothic romantic thriller went back only a couple of centuries.

I stumble on Barcelona’s Jewish heart by accident while wandering the medieval Barri Gotic, and only in unexpected moments. Like many centers in Spain, Barcelona has marked its long-gone Jewish quarter for the sake of contemporary visitors. ‘This is the site of the call, the medieval Jewish quarter’ the official sign says, and the tour guides repeat. If you stand at the corner of Carrer de Saint Domenec de Call and Carrer del Call, you’ll hear the sign translated into German, French, and English – the languages of tourism. But you’re unlikely to hear that this is the alleged site of the medieval Sinagoga Major, despite the fact that there is a privately- owned and run underground prayer room reconstructed to resemble the 13th-century original.

You certainly won’t hear about Semana Santa in 1367, when the residents of Barcelona’s Jewry, close to 5,000 people, were crowded into the synagogue without food, water, or sanitation provisions, until three elders ‘admitted’ to poisoning the Cathedral’s host and were publicly hanged. Chances are you won’t hear about the Inquisition, or the Edict of Expulsion of 1492, after which Spain remained free of Jews until the beginning of the 20th century, when a trickle of refugees began to return, mainly to Madrid.

I’m here on my way to Languedoc, on the trail of the 12th century Rabbi Isaac the Blind, father of kabbalah and possibly my ancestor. Because Isaac’s neighborhood, now France but then part of the Crown of Aragon, was under the jurisdiction of Barcelona, I know that the city was a major Jewish center in the Middle Ages, home to prominent physicians, traders, and Talmudic experts. But that was long ago; the contemporary Jewish population is small in number, discreet, and composed mainly of Israelis and Argentines of Ashkenazi descent.

Barcelona’s Placa Real, an elegant square just off the Ramblas, these days is frequented only by tourists, especially by day when the cafes and restaurants lining its four sides offer their menu del dia and people pose for photos in front of the statue in the middle of the square. Few visitors to the Placa know that upstairs in one of its corners sits Barcelona’s Pipa Club, filled with humidors and old meerschaums, a reminder of a more class-conscious but elegant era. These days the Pipa Club is known mainly to aficionados of Argentine tango, where the milongas, like those in Buenos Aires, start at midnight and last till dawn.

By the way my dance partner, Mariano, sardonically tells me that “not all people from Buenos Aires dance tango, you know,” I suspect he is Jewish, but we do a special kind of identity-dance before we announce that part of ourselves. Mariano is a journalist who grew up in Buenos Aires, now dividing his time between Amsterdam and Barcelona. I will learn later that his father, a Jewish physician who ministered to the Argentine poor and dispossessed, for that reason became one of the desaparecidos in the time of the generals. But first Mariano takes me on a hidden Jewish tour of Barcelona, pointing out Hebrew inscriptions in some of the construction stones of the cathedral’s side wall, stones that had once been gravestones in the ancient Jewish cemetery on Montjuic before it was claimed by the Reconquista.

On another day I go with Tal, a young Israeli trying to connect with his Sephardic roots, in search of other unofficial Jewish sites. On Carrer Banys Nous, which translates as Street of the New Baths, and which is lined with chic boutiques and souvenir shops, we enter an upscale interior-design and flower store; Tal leads me to the back, to a roped-off area where the brick wall is damp and there are old stone stairs leading down to a pool-like enclosure uncovered during renovations. To a Jewish eye this looks like a mikveh, a ritual bath, but there is no documentation to authenticate this kind of conjecture. Like much of Barcelona’s Jewish history, destroyed over 500 years ago, it is lost in the dark stones.